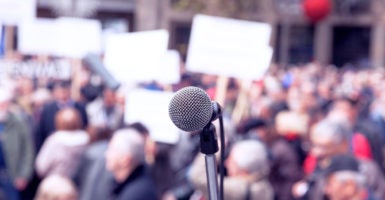 State mottos should be built to last, and Alabama’s lawmakers just applied theirs—Audemus jura nostra defendere or “We dare defend our rights”—to one of the most contentious and visible issues of debate today: free speech on college campuses.

Last week, Gov. Kay Ivey approved a proposal to protect the expressive rights of everyone who is part of a university community.

The proposal forbids so-called free speech zones, instructs university officials to be prepared to issue consequences to students who violate others’ right to listen and be heard, and assigns public university governing boards the task of writing an annual report on free speech-related incidents.

Alabama’s proposal is the latest in a string of actions by state lawmakers around the U.S. to resist the efforts by on- and off-campus protesters to intimidate and bully students, faculty, and administrators by disrupting campus activities. In the last three years, policymakers in Arizona, North Carolina, Georgia, and Wisconsin have enacted similar proposals.

These responses to campus censorship have key provisions in common that distinguish them from other attempts to restore the pursuit of truth in the academy.

The measures call for public colleges to adopt principles similar to what is known as the “Chicago Statement,”  which says schools must not act to protect students from ideas with which they may disagree. More than 60 colleges around the country have adopted this statement.

Second, all public areas of campus must be considered “free speech zones.” Universities around the country have been criticized for limiting expressive activity to small, isolated areas of campus.

Rep. Phil Roe, R-Tenn., cited these zones in a resolution condemning campus speech codes that he introduced earlier this year.

The American Civil Liberties Union also opposes these zones and said, “While it may sound like these zones are designed to promote speech, they actually do the opposite by confining political expression to designated areas, often in out-of-the-way locations on campus.”

Third, public college officials must be prepared to issue consequences to individuals—including students—that block someone else’s attempt to be heard.

A group that staged a protest in opposition to a guest lecturer’s remarks at a University of Wisconsin event told reporters this portion of the Wisconsin Board of Regents’ operating policy prevented them from disrupting the event.

In Wisconsin, Arizona, North Carolina, and Georgia, students accused of violating someone else’s speech rights must be made aware of any hearings on their case and have the right to find representation.

Anyone lawfully present on a public college campus should be allowed to demonstrate there, as long as those activities do not interfere with others’ attempts to listen or be heard.

Students at Evergreen State College in Washington state occupied administrative buildings in the spring of 2017 and disrupted campus events for weeks without sanctions.

Student discipline came months later, after the school year ended, but by then, the damage was done. School officials had to temporarily close campus and delay graduation.

Mike Paros, professor at Evergreen, wrote in Quillette, “Marginalized students seeking justice for themselves and others will realize that they deserve a school where ideas can be exchanged freely.”

The new Alabama proposal is designed to protect learning environments and allow the free exchange of opinions. Evergreen’s example may be extreme, but not by much.

Two public colleges in Alabama made the Foundation for Individual Rights in Education’s list of worst colleges for free speech. Last November, the College Media Association censured the University of North Alabama after the school blocked the student newspaper’s access to information about a public employee.

Alabama lawmakers took the opportunity to defend free speech on campus and governed according to its state motto. Now, college governing boards and school officials must do the same.