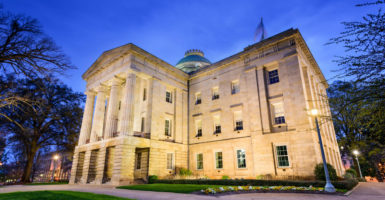 The North Carolina House of Representatives passed the Restore Campus Free Speech Act by a vote of 80-31, with 10 Democrats siding with the GOP. (Photo: iStock Photos)

The time is ripe for such reforms, as free speech is under attack on campuses around the country.

North Carolina lawmakers refused to retreat and became the first to enact a law based on a proposal developed by Stanley Kurtz of the Ethics and Public Policy Center and researchers from the Goldwater Institute.

Introduced at an event at The Heritage Foundation earlier this year, the proposal requires that a public university system’s board of trustees develop a statement in favor of free speech and include a review of the university’s commitment to free expression during freshman orientation programs.

The proposal also says that anyone lawfully present on campus has the right to protest or demonstrate there and includes due process protections for those accused of interfering with someone else’s free speech rights.

Kurtz explains in National Review that the North Carolina law contains key parts of the Goldwater proposal. Lawmakers required that university personnel explain the school’s position on free speech during freshman orientation, and the law prevents administrators from disinviting speakers that may be controversial.

Lawmakers also require that “a range of disciplinary sanctions” should be applied to “anyone under the jurisdiction” of the university that “substantially disrupts the functioning of the constituent institution or substantially interferes with the protected free expression rights of others,” language similar to Goldwater’s model.

North Carolina lawmakers acted not a moment too soon.

Just this year, speakers have been disinvited or shouted down and individuals have been threatened or injured at University of California campuses, Middlebury College in Vermont, Evergreen State College in Washington state, and New York University, to name a few.

We are at the beginning of a new state-legislative era, and that beginning is auspicious … Campus free-speech legislation is now in play as never before. Administrators will have to take that into account when they decide how to handle free speech. In short, the public has awakened and is actively pushing back against the illiberal assault on speech.

Violent protests and college administrators disinviting controversial lecturers are not unique to this generation of students. Schools such as Yale and the University of Chicago dealt with similar activity in the 1960s and ‘70s.

These papers reminded their campus communities that the discovery of new ideas and healthy debates about all sides of an issue should be central to a university’s function.

“It follows that the university must do everything possible to ensure within it the fullest degree of intellectual freedom,” wrote the Woodward authors.

But today, with campus mobs shouting down speakers with whom they disagree and violent activity intimidating students and faculty alike, public colleges need to be reminded again of the importance of free expression.

Fortunately, efforts like those in North Carolina to protect free speech on public college campuses are underway elsewhere in the U.S. Lawmakers in Wisconsin, Michigan, and California are considering similar ideas.

For the sake of future generations of students and the protection of our Constitution, let’s hope North Carolina’s commitment to free speech is a sign of things to come.