This Teacher Came Out to His Students as Transgender, and Expects Them to Go Along With It 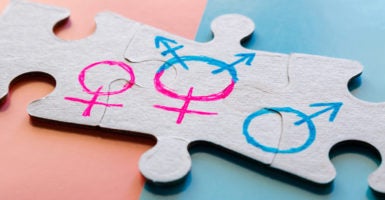 Mark Vincent Busenbark wants his young students to call him not mister, not miss, but "mix." (Photo: itakdalee/Getty Images)

Transgender activists are continuing to force their lifestyle and language preferences onto children and college students, with little interference from administrative officials. All of this encourages young people to deny biology and accept these new “norms” as fact.

In May, Busenbark showed a video of himself “coming out” as transgender to all-aged elementary students who were present, from kindergarten through fifth grade.

In the video, he read a book to the children called, “They Call Me Mix,” which includes dialogue like: “‘BOY or GIRL?’ Are you a boy or a girl? How can you be both? Some days I am both. Some days I am neither. Most days I am everything in between.”

At the video’s conclusion, Busenbark said, “And now, let me introduce myself, anew. I am going to take my wife, Stella Steel’s last name, and I am going to use, not mister, not miss, but ‘mix.’ So you can call me, ‘Mix Steel.’ And for my pronouns, you can call me ‘they,’ ‘them,’ and ‘their.’”

He suggested that people who disagree with his transgenderism are motivated by “fear” and “hate” and depicted said folks as ghostlike, scary people. On Busenbark’s Facebook page, he said the purpose of showing every student the video was so that “all [the children] can know who I am and who I am becoming.”

Liberty Counsel, a religious liberty advocacy group, is investigating the matter. In a statement, founder and Chairman Mat Staver said:

It is outrageous that school administrators would allow a male science teacher to expose children to propaganda that promotes confusion about basic biology, and to instruct students to address him by a false name, title, and pronouns. These impressionable students do not exist to validate Busenbark’s sexual identity. Parents send their children to school trusting that they will be taught academic curriculum, not become participants in a teacher’s play acting.

This is not the first time this has happened—nor will it likely be the last. This is, however, one of the first reports I have seen of this happening in elementary school.

This occurred at a university in 2018. Nicholas Meriwether, a Shawnee State University professor, became the subject of an official complaint when he refused to refer to a male student, who decided to be transgender, with feminine pronouns.

In an attempt to compromise, Meriwether offered to refer to the student by his last name. That didn’t stop the student from filing a formal complaint to the university, which launched an investigation, prompting Meriwether to seek legal counsel. Administrative officials then gave him a written warning threatening “further corrective actions” if he did not comply.

In fact, a very similar situation is the reason Canadian psychology professor Jordan Peterson initially became so well-known: not because of his book, “12 Rules for Life: An Antidote to Chaos,” but rather his insistence that the Canadian government should not mandate that people refer to transgender-identified people by their “preferred” pronouns—particularly ones that seem entirely contrived, like “ze.”

A similar controversy in Virginia resulted in public school teacher Peter Vlaming losing his job. This is the kind of thing we could expect to see nationwide if the Equality Act were to pass.

Unfortunately, transgender “rights” and forced conformity for everyone else are two sides of the same coin. Throughout our education system, the rights of students and teachers alike are trampled when they are forced to go along with a fiction, under the guise of tolerance and acceptance. Students are compelled to watch “coming out” videos. Professors are compelled to call a male student “Jessica” or be labeled intolerant or bigots.

Yet the real bigotry here is a lack of concern for the rights of people who are being forced to use labels that don’t make sense.

Compelling the speech of children 10 years old and younger is particularly egregious because children this age are so malleable. This elementary school teacher is not only informing students about his chosen identity that blatantly denies biology, and is therefore false, but he’s forcing students to refer to him as such.

Compelled speech in a system that’s supposed to champion free speech, ideas, education, and curiosity is a travesty to our children. It is one that administrations, teachers, and parents must combat.