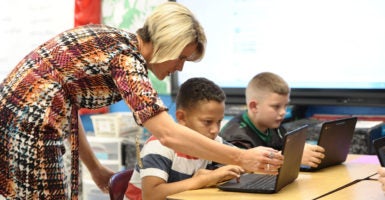 The Equality Act could lead to LGBT curriculum in all public schools. (Photo: MichaelMathes / Contributor/Getty Images)

If Democrats’ priority legislation becomes law, public schools could be forced to include discussions about transgenderism in math and history classes for elementary school students.

The Equality Act, if passed and signed into law, would add gender identity and sexual orientation to the list of classes—race, color, religion, sex, and national origin–protected in the Civil Rights Act.

And although it sounds good to say you oppose discriminating against people on the basis of gender identity and sexual orientation, House Speaker Nancy Pelosi’s priority bill, known as HR 5, has far-reaching legal implications.

A variety of Supreme Court cases, including Meyer v. Nebraska and Pierce v. Society of Sisters, affirm the rights of parents to control their child’s education. But the Equality Act would create precedent for federal courts to require curriculum celebrating lesbian, gay, transgender, and bisexual orientations.

This change to advance the radical LGBT agenda wouldn’t apply just to sex ed classes, but subjects such as history and science as well.

Laws that require gender identity and gender orientation to be a part of curriculum already exist in New Jersey, Illinois, Colorado, California, and Washington, plus the District of Columbia.

In 10 other states, lawmakers have passed bills to limit such curriculum, but the Equality Act would nullify those restrictions. (The states: Alabama, Arizona, Louisiana, Mississippi, Oklahoma, South Carolina, Texas, Utah, Florida, and North Carolina.)

A broader movement aims to reorient K-12 curriculum in America toward a focus on sexual orientation and gender identity. For instance, groups such as the Human Rights Campaign; the Gay, Lesbian, and Straight Education Network; and Planned Parenthood are encouraging initiatives that would bring this sort of education to schools around the country.

They are relentlessly working to bring pro-LGBT curriculum to schoolchildren, even at the pre-K level.

They call for pro-transgender picture books and resources for teachers to explain terms such as “pansexual,” “nonbinary,” and “sex assigned at birth” to elementary school students.

Maria Keffler, a former teacher who wrote in The Washington Post about the intrusion of gender politics into classrooms, described in an interview with The Daily Signal podcast how a Northern Virginia elementary school held a reading of a transgender storybook called “I Am Jazz.”

“It’s geared for kids ages 4 and up,” Keffler said, and is “about a boy who transitioned to being a girl, medically and surgically.”

This is just the tip of the iceberg that is HR 5.

As Autumn Leva, vice president of strategy for the Family Policy Alliance, wrote in a commentary for The Daily Signal, the Equality Act would mean schools could have to include discussions about the sexual preferences of various historical figures (much of which rises barely above the level of speculation).

In a nation in which most Americans can’t pass even a basic citizenship test, is this really what needs to be prioritized?

For many on the left, certainly those pushing the sexual orientation and gender identity curriculum, the answer is yes.

The Gay, Lesbian, and Straight Education Network suggested that teachers: “Acknowledge the gay identity of Francis Bacon (creator of the Scientific Method) or Frieda Kahlo’s bisexuality when studying their works.”

April Faulkner, a high school teacher in California, told Reuters about teaching that a Revolutionary War hero, Baron Friedrich von Steuben, may have been gay:

If I have one student who feels more comfortable about their identity and sexuality because they learned about Baron von Steuben and how he whipped the army into shape … Even if it’s just one student, that’s worth it.

So curriculum is being reduced to making students feel good or advancing a particular point of view on sexuality, rather than giving students a thorough education. This goal explains our growing societal ignorance despite countless resources being thrown at education.

Burying the important and essential elements of our history—such as the creation of the Constitution and the meaning of the Civil War—for trivial matters is perhaps why we are becoming a nation of dunces, unable to have serious discussions about ideas or history without safe spaces and the need to erase things that make us uncomfortable.

Obviously, ideological indoctrination of all kinds already happens in classrooms across the country. But what makes HR 5 pernicious is that it would force everyone to comply with the radical LGBT agenda, regardless of the beliefs and desires of parents and local communities.

Dissent will not be allowed.

“The Equality Act could override the efforts of parents across the country, like those in New Jersey, to preserve their freedom to teach their own children about sexuality, marriage, and biology at a time and manner of their choosing,” Emilie Kao, director of the DeVos Center for Religion and Civil Society at The Heritage Foundation, told The Daily Signal in addressing parental concerns with related new content in New Jersey schools.

This uniform requirement is at the heart of the agenda for the Equality Act, which really should be named the Conformity Act. It serves as a stark reminder of why, for instance, there is ample reason to worry about Common Core or a federal tax credit scholarship.

Even a well-intentioned federal program can be quickly and easily turned to ruthless and unescapable social engineering.

The Equality Act’s goal is forced conformity to a narrow agenda pushed by the LGBT left wing, and it’s a tyrannical and un-American threat to those who believe differently.