Equality Act Is About Civil Tyranny, Not Civil Rights 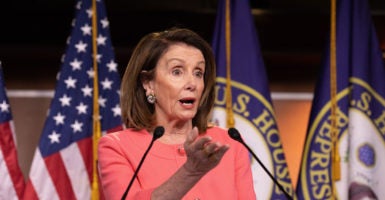 The Equality Act is on the agenda for the Democrat-controlled House of Representatives and Speaker Nancy Pelosi, D-Calif. (Photo: NurPhoto/ Contributor/Getty Images)

The House Judiciary Committee has voted out the Equality Act of 2019. It now heads for a vote on the House floor with 240 co-sponsors, which means its passage is virtually certain.

The legislation amends all major civil rights law, including the 1964 Civil Rights Act, to include “sexual orientation” and “gender identity” along with race, sex, and religion as classes that are protected from discrimination.

There is so much wrong here it is hard to know where to start.

My dictionary defines psychosis as “a severe mental disorder in which thought and emotions are so impaired that contact is lost with external reality.”

We now have a majority of members of Congress who are prepared to pass into law that the sex individuals are born with—their chromosomal and physical reality—will take a back seat to how those individuals choose to define their own sexual identity. Henceforth, we’ll be done with the idea that there is some objective reality independent of what of any particular individual decides it is.

I once complained that our society was denying morality—right and wrong. Now we’re beyond this. We’re denying reality in its entirety.

My impulse is to turn to heaven and pray to our God to save us.

But even the reality of our God, to whom the signers of the Declaration of Independence in 1776 turned for “protection,” and to whom they pledged “our Lives, our Fortunes and our sacred Honor,” is widely being brought into question.

The situation is dangerous. Hopefully, this disaster will be stopped.

First, let’s appreciate that this is oppression dressed up in language of freedom and justice.

Religious freedom goes out the window if this bill becomes law.

It explicitly defines itself as overriding the Religious Freedom Restoration Act that can protect people, such as Christian baker Jack Phillips, from being forced to do commerce that violates their Christian convictions.

There will be no more legal protections for Christians in commerce or in any other circumstance to enable them to avoid complicity with behavior that for them is sin.

A bizarre list of behaviors will become legally protected and enshrined in a new America that will be the total antithesis of the ideals of liberty envisioned by its founders.

I will have to start to worry that my little granddaughter will encounter a man in the restroom who has a right to be there because he thinks he is a woman.

Under the guise of civil rights, our public schools will be forced to teach this sexual nihilism as truth, and teaching the traditional values that have held the American family together will become an actionable offense.

Civil rights law was designed to protect human dignity by preventing individuals from being reduced to pre-existing realities not connected to their personal choices, such as race. Now with this law, the sexual behavior they choose, and the sex they decide they are, will receive the same protections.

There is a spiritual as well as a legal price that we’re already starting to pay for this insanity.

The culture of meaninglessness, driving perverse legislation such as the Equality Act of 2019, will destroy us.

We must vigilantly fight to prevent it from passing into law, as we recall the words of historian Arnold Toynbee: “An autopsy of history would show that all great nations commit suicide.”