A Mark That Misses the Mark: House Democrats and the National Defense Authorization Act 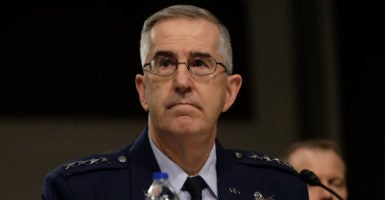 The Democrat-controlled House Armed Services subcommittee on strategic forces is advancing policies on nuclear weapons and missile defense that would make the U.S. and its allies less safe.

This is evident in the markup (or the subcommittee’s version) of the National Defense Authorization Act, which it released Tuesday.

For example, the markup prohibits funding for deployment of the W76-2 low-yield nuclear warhead despite a strong endorsement from Air Force Gen. John Hyten, commander of U.S. Strategic Command, who is charged with executing the deterrence mission.

The action comes on the heels of a letter Monday to leaders of the House and Senate Armed Services committees from 26 national security experts, calling for such a step (as well as for an extension of the New Strategic Arms Reduction Treaty, a bad idea of its own).

Not deploying the W76-2 would be a mistake. The low-yield version of the W76 warhead is a “supplemental capability” endorsed in the 2018 Nuclear Posture Review.

A limited number of warheads already are modified, meaning no additional action is required. Which is why the House subcommittee’s “mark” of the National Defense Authorization Act focuses on prohibiting funding for deployment of a weapon, rather than development.

The weapon itself is not a new capability or a new nuclear weapon, as some try to claim. Rather, it’s a necessary response to developments in Russia’s nuclear forces developments.

Russia maintains at least a 10-to-1 advantage in this class of weapons. The decision to defund deployment of the W76-2 warhead will serve only to exacerbate this disadvantage.

It is also worthwhile to note that deploying a low-yield warhead on an existing platform means that the overall yield of actively deployed U.S. warheads will decrease. Although that does not compromise U.S. target coverage, developments in Russia’s nuclear doctrine are deemed so severe that U.S. leadership determined it was necessary to make this trade-off.

The silence of the arms control community on this point is a sign of intellectual inconsistency.

The annual National Defense Authorization Act authorizes appropriations and sets out policies for the Defense Department as well as for military construction and the Energy Department’s national security programs.

The House subcommittee’s mark of the NDAA also unhelpfully walks back the U.S. commitment to a comprehensive layered missile defense system, advanced in a bipartisan manner in the fiscal year 2017 NDAA, which states in part:

It is the policy of the United States to maintain and improve an effective, robust layered missile defense system capable of defending the territory of the United States, allies, deployed forces, and capabilities against the developing and increasingly complex ballistic missile threat with funding subject to the annual authorization of appropriations and the annual appropriation of funds for National Missile Defense.

The subcommittee Democrats seek to limit homeland defense to rogue states while explicitly stating we would rely on nuclear deterrence for near-peer adversary ballistic missile threats. It argues that a similar position is advanced in the 2019 Missile Defense Review.

That is inaccurate. The Missile Defense Review does not preclude a role for missile defenses against threats like those of Russia and China, and is explicit in saying the U.S. would not accept limits on its missile defense programs should they advance to the point of having a substantial capability against Russia and China.

President Donald Trump could not have been  clearer in his remarks at the time of the review’s release: “Our goal is simple: to ensure that we can detect and destroy any missile launched against the United States—anywhere, anytime, anyplace.”

Regrettably, Democrats on the House Armed Services Committee do not share the same commitment.