Podcast: How to Achieve Racial Unity in America 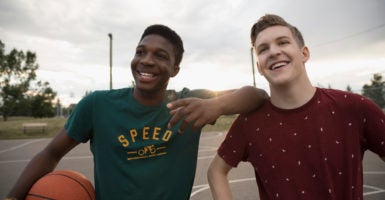 "Everybody is my neighbor. I can't pick and choose," says Miles McPherson. McPHerson not pictured above. (Photo: Hero Images/Getty Images)

We live in divided times—that’s no secret. And sometimes, those divisions fall along racial lines. Former NFL player Miles McPherson dealt with racism daily growing up in an interracial family. Now as a pastor, he’s seeking to build a more perfect and racially unified nation. Today, I’ll have Pastor McPherson on the show to share his story, and his hope for America.

The Daily Signal podcast is available on Ricochet,iTunes, SoundCloud, Google Play, or Stitcher. All of our podcasts can be found at DailySignal.com/podcasts. If you like what you hear, please leave a review. You can also leave us a message at 202-608-6205 or write us at [email protected]. Enjoy the show!

Daniel Davis: I’m joined now by Pastor Miles McPherson. He is the senior pastor of Rock Church in San Diego, California, and you may know him if you’re a football fan, former cornerback for the Chargers.

Davis: Wow, fantastic. Well I’d like to spend a whole other podcast talking about your football career, but today we’re here to talk about your book. It’s called “The Third Option: Hope for a Racially Divided Nation.”

Davis: And I’m looking here at your book—Drew Brees has written the foreword to it. You’ve got a lot of folks supporting the book. What led you to write it?

McPherson: I was actually writing a book on something else and one of the chapters is on racism, and as I was writing that chapter, I just felt like I would love to write a whole book on it, and that’s what the publisher asked me to do. Our country is so divided and it seems like everyone is fueling the fire with reasons they think we’re divided, and why their side is right. I wanted to write a book that gave people tools on how to come together and be united. And so, this book is all about how we can honor what we have in common.

You know, in our culture we have an us-verses-them divided culture. You always feel like you have to pick a side against some group. This book talks about how we can honor what we have in common because we’re all more similar than we are different.

Davis: Yeah. And for several decades, you’ve been—you were in the NFL in the 80s as you mentioned. So, you’ve been, I assume, at least a part of this conversation for a while? I mean, longer than I have.

Davis: Do you think things have gotten worse in recent years?

McPherson: You know, I think things are in one sense worse. People are more outspoken about their bias and hatred and opposition to people, but I think it’s backfiring. I think more people are now becoming more vocal about being united, where people before would just kind of say anything—sit in their corner and say anything. Now, people are starting to step up and say, “Look, can we talk about this? Can we do something about it?” And so, in one sense, yes, it’s more out in the open, but that is also a good sign that people are now talking about it, and I think that people want to learn how they can be less divided and understand the issues better.

Davis: Yeah. So, what is it that keeps us divided and apart? We’re a country. We’re a nation. We play football together. We have things that unite us. But the racial divisions continue to a large extent.

Davis: What is it that keeps us divided?

And if we all could work together to accomplish that for each other, versus getting mine against yours … then, if I have to get mine at the expense of you, then we have a problem.

Davis: Yeah. Well, a lot of this in recent years has come to a head in the NFL, actually. The kneeling controversy, I think, has surprised a lot of people with just how different perspectives people have. It would seem from the controversy that being patriotic and holding a certain political view, or caring about those who are in prison, are contradictory. Yet, that doesn’t seem to be the case.

Davis: But yet we are missing each other. We’re talking past each other.

McPherson: Totally. You hit it right on the head. We’re talking past each other because those guys—there’s a kid in New York who was arrested on an accusation he stole a backpack, and he was in prison a 1,000 days on that accusation, and he was in solitary confinement 700 of those days. Then he had a trial and he tried to kill himself multiple times on an accusation, and they ended up letting him go. No trial, and he killed himself when he got out because his experience was so traumatic. But he was only there for an accusation.

The reason those guys knelt is because of things like that. They weren’t kneeling to, you know, disrespect the flag. Their point was missed and I think that was the tragedy on that whole thing.

Davis: Yeah. You know, Black Lives Matter has also emerged in response to some of this controversy. You’ve got people responding to that saying, “No, all lives matter.” Again, they’re talking past each other.

Davis: How do we bridge that divide?

McPherson: And again, we’re talking past each other. If people could talk with each other like this, right? And say, “Tell me what your point of view is. Tell me what your pain is. Help me understand your perspective.” When we identify the group that we are, our “in” group as I’m going to talk about, we understand the people who are like us but we don’t understand the people who are not like us. And we make assumptions about the people who are not like us, not having spoken with them, not having spent time with them. It’s easy for us to make assumptions and to come up with reasons and excuses for what they do that make them look bad.

Davis: So, were there any formative experiences in your own life that shaped your approach to this?

McPherson: So, my childhood was filled with tension. Plus, it was in the 60s so Martin Luther King was killed when I was eight. And so, there was a lot of racial tension in my life growing up. But when I played football, we had an integrated team and we all got along. We fought together. We played together. We worked hard together and in my family, we all got along.

So, I saw my family, my football teams getting along—but yes, society, and when I went outside the house, it was a little different. That formed my opinion about things. You know, my brother played in the NFL. I played in the NFL. I have another brother who played, who was an eighth-ranked boxer. So, we saw racism even in sports, in what position you played. My brother was a quarterback and in the 80s, a black quarterback wasn’t a fashionable thing like it is today.

McPherson: So, we did have a lot of racial tension and division in our family, against our family. So, that shaped how I saw the world as well.

Davis: So, you feel like you kind of had to deal with it?

Davis: Because it was just on your plate every day.

McPherson: Yeah. Yeah. But all people of color have to deal with it all the time.

McPherson: Yeah. All the time. So, that’s nothing new. That’s not anything unique.

Davis: Well, now you’re a pastor in San Diego. How do you approach this issue in the context of your own church, and how does your faith weigh in on the issue?

McPherson: Exactly. You know, our church is about 20,000 people. Every week, we have seven locations and we are as diverse as the United Nations. In San Diego, we pretty much match their demographic and we have more nationalities and ethnicities than we can count. And the Bible tells us to love everybody as we love ourselves. And in fact, Jesus said, “The greatest commandment is to love God with your heart, mind, and soul. The second is love your neighbor as yourself.” Well, everybody is my neighbor. I can’t pick and choose.

McPherson: And so, I teach that, look next to you and you’re going to see someone from a different ethnicity, a different country. That’s your neighbor no matter what they look like. No matter what their experience is. That’s your neighbor. When you change someone’s label and you label them something less than neighbor, you dehumanize them and you disqualify them from you having to love them. But it’s the wrong thing to do. So, I teach the church, look, everyone in here is your neighbor. We have to love everybody and encourage them, point them to Jesus. That’s our job.

McPherson: If a doctor cuts you open, you’re going to have a heart just like me and intestines just like me. So, we have a lot more in common. If we can focus on how to understand those things and honor those things and place value on that, then our differences of culture will be a benefit. We can learn from each other.

Davis: Well, I love that. And it seems like church is such a great place to lead on this. I mean, in my own church as well, I hear the pastors say, “There’s no Gentile, there’s no Jew in Christ. All are one.” And that’s such a cool place to try to model that. I always thought that if the church could model racial unity, then society can look to that and see that it really is possible.

McPherson: Mm-hmm. We have to model that. I mean, that’s what Christ called us to do. Our greatest, number one responsibility is to love him and love our neighbor. You know, if people look at us and see us segregated on Sunday morning, we look somewhat hypocritical in saying, “Hey, we love everybody but we’re going to go to church only with people who look like me.”

McPherson: That’s where the battle needs to start.

Davis: Wonderful. Well, Pastor Miles McPherson, thank you so much for joining us. The book is called “The Third Option: Hope for a Racially Divided Nation.” I assume it’s on Amazon and all those websites.

McPherson: It is on Amazon. Go get it. “The Third Option.”

Davis: Go get it. Wonderful. Thanks so much for joining.