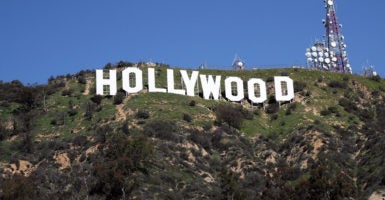 A California Democrat is trying to offer incentives to any studios willing to move their productions out of places like Georgia and Alabama in order to stop the new wave of abortion bans. (Photo: David Livingston/Getty Images)

Turns out, California does believe in tax breaks—as long as they punish pro-lifers.

One Democrat is so desperate to stop this new wave of abortion bans that she’s trying to offer incentives to any studios willing to move their productions out of places like Georgia and Alabama.

Under her bill, California would sweeten the pot for any entertainers who boycott states with pro-life laws. There’s just one problem. With so many legislators lining up to protect the unborn, there aren’t a lot of places to go.

“A lot of the entertainment industry has relocated to Georgia because that state was very competitive in their own state film tax credit,” said Rivas.

Last year alone, the Peach State’s tax incentives reeled in 455 Hollywood projects, including blockbusters like Marvel’s “Black Panther.” Alabama also hit a personal record for productions with 150—thanks to refundable tax credits up to 35%.

Rivas thinks more filmmakers would walk out on conservative states if California could find a way to lower its suffocating tax rates. “We’re trying to further incentivize the entertainment industry that currently is filming in states with these strict abortion bans to come and do business in California and share our values.”

She’s convinced that dangling a few extra carrots in front of ultra-liberal Hollywood would “really [put] pressure on the industry to reconsider whether they want to do business in those states.”

Even in California, where the abortion dogma is thicker than smog, it will take a lot more to lure producers away from their sweet deals in the South. Big names like Ron Howard and Jason Bateman may be willing to call Alabama’s Human Life Protection Act a “disgrace,” but that doesn’t mean they’re going to pull up stakes and move out of deep red states.

“More than 50 films and TV shows shooting in [Georgia] have remained quiet on the legislation” just signed into law by Republican Gov. Brian Kemp. “In fact,” The Hollywood Reporter points out, “some filmmakers [like Howard] have announced publicly that they intend to move forward with their shoots in the state—but at the same time have pledged to donate money to organizations fighting the legislation.”

(In the end, they know that’ll cost them less than moving to an over-regulated liberal state with sky-high taxes.)

But radicals like Rivas have a lot bigger problem on their hands than Hollywood. There’s also the fact that her own party is crossing over to make these pro-life laws possible.

Apart from the out-of-touch bubble of Washington, D.C., even Democrats in deep blue states are distancing themselves from the uncivilized agenda of leaders like Speaker Nancy Pelosi, D-Calif. Like most Americans, they don’t think “abortion” should include the killing of newborn children.

In fact, the national party’s extremism may actually be having the opposite effect on local Democrats. In the other LA—Louisiana—Democrat Sen. Katrina Jackson is actually leading the effort to add a pro-life amendment to the state’s constitution. And that effort is paying off. On Tuesday, Louisiana senators followed Jackson’s lead and sent the language to voters for the 2019 ballot—including seven Democrats.

And Louisiana isn’t the only place where legislators are bucking their party. Already this year, the Family Research Council team has counted more than 120 state Democrats in 15 states who’ve either voted to advance the sanctity of life (through bans on dismemberment abortion, heartbeat, pain, and born-alive bans) or voted against an abortion expansion.

As Americans have been trying to tell the Democratic Party for years, there’s plenty of room for common ground on abortion—especially when it comes to restricting it.

The media isn’t racing to highlight it, but according to polling, 80% of Americans want to limit abortion to the first trimester—including 65% of “pro-choicers.” That’s a far cry from the infanticide Hill Democrats are pushing.

Of course, the one place where liberals do have it good is the courts. Just this week, U.S. District Judge Carlton Reeves (who seems to be getting a suspicious number of social issues cases) came down hard on Mississippi’s heartbeat law.

Reeves, who struck down the state’s religious freedom measure and an earlier 15-week abortion ban, went for the trifecta Tuesday in arguments over the new heartbeat law.

A true activist, Reeves couldn’t believe that the state would dare to challenge the almighty judiciary. Although Reeves hasn’t made a final decision, he didn’t exactly make it a secret which way he was leaning. “It sure smacks of defiance to this court,” he bristled.

I suppose he, like a lot of liberals, is under the assumption that the courts are the last word on life and every other matter. Of course, that’s not the system the Framers designed.

“The accumulation of all powers, legislative, executive, and judiciary, in the same hands, whether of one, a few, or many, and whether hereditary, self-appointed, or elective, may justly be pronounced the very definition of tyranny,” James Madison warned.

Americans have fought the tyranny unleashed on them in Roe for 46 years. We celebrate the people from both parties who believe that someday, love and dignity—not the courts—will have the final word.