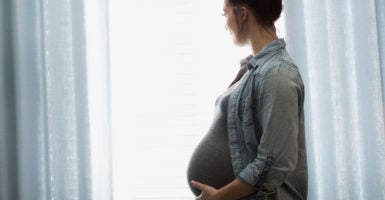 The total fertility rate needs to be 2,100 births per 1,000 women to keep our overall population at steady state—not shrinking. It now stands at 1,728 per 1,000 women. (Photo: Hero Images/Getty Images)

When we talk about “pro-life” in our national discussion about abortion, “life” is understood to be about the unborn child in the mother’s womb.

But it would serve us well to expand our understanding about what “pro-life” means.

We should understand that respecting the sanctity of life is key to the values and behaviors in general that sustain and nourish all our lives today and create the necessary conditions for our future.

It also reports that the general fertility rate—the number of births per 1,000 women aged 15-44—was also down 2% and is at a record low.

If the alternative to “pro-life” is so-called “pro-choice,” the mindset of legal abortion on demand, the latter is capturing, and destroying, American society. We are choosing to extinguish ourselves.

It turns out that “reproductive freedom,” the banner under which “pro-choice” operates, translates into the freedom to not reproduce.

University of Southern California demographer Dowell Myers calls the declining birthrates we are witnessing a “barometer of despair.”

Birthrates decline, according to Myers, when people are not optimistic about the future.

How about the general collapse of the marriage institution?

At a conference at the Vatican in 2014, Rabbi Jonathan Sacks, former chief rabbi of the United Kingdom, called marriage “the single most humanizing institution in history.”

He said that life begins “when male and female meet and embrace.”

“Morality,” he continued, “is the love between husband and wife, parent and child, extended outward to the world.”

A society in which sanctity of life is respected is a society that appreciates that we are all part of something larger than ourselves. When we lose this awe, this appreciation for the sacred, we disconnect from one another and disappear into our separate selves.

Love, marriage, children, and our future begin to recede.

It’s a spiritual tragedy with profound and destructive practical implications for society.

As society ages, the number of retirees per each working American increases—what is called the dependency ratio.

We are already seeing the implications with huge deficits in our Social Security and Medicare programs, where payroll taxes finance retirement and health care costs of the elderly.

A healthy pushback is starting to occur at the nation’s grassroots.

States are getting aggressive to stop the destructive abortion culture. Most recently, Alabama and Georgia have enacted laws making abortion that is legal under federal law illegal in the state.

This puts state law on a collision course with federal law.

Whether this will wind up at the Supreme Court with a revisiting of the Roe v. Wade decision remains to be seen.

We should be praying it will happen.

The current abortion culture that has been defining America since the Roe v. Wade decision in 1973 is part and symptomatic of an America whose future is in danger.

We must fight for restoration of a pro-life culture in our country that respects the sanctity of life and will restore the American family, children, and our future.