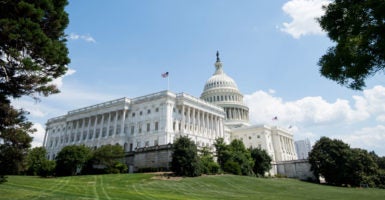 The Heritage Foundation’s "Blueprint for Balance," if implemented, would reduce spending by $10.8 trillion and eliminate budget deficits in 10 years as well as reduce taxes by $800 billion. (Photo: Bill Clark/Getty Images)

Balancing the budget while reducing taxes and prioritizing national defense are the main goals in a blueprint for smarter government spending released Monday by The Heritage Foundation.

The think tank’s new “Blueprint for Balance” “lays out an agenda both for our long-term governing vision [and] what our conservative policy priorities [are] that we want lawmakers to champion,” Romina Boccia, director of Heritage’s Grover M. Hermann Center for the Federal Budget, said during a roundtable with reporters to introduce the plan.

“Overall,” Boccia said, the blueprint specifies “what Republicans especially should be pushing for in the spending bills in order to realize conservative policy priorities and reduce spending in accordance with our values.”

The Budget Control Act, passed in 2011, sought to curb government spending and control the growth of government programs, capping discretionary spending at $1.07 trillion for fiscal year 2018.

Justin Bogie, a senior policy analyst in fiscal affairs at Heritage, wrote in a recent commentary that congressional Democrats are looking to raise the Budget Control Act’s caps on discretionary spending by at least $357 billion over 2020 and 2021.

Heritage’s “Blueprint for Balance,” if implemented, would reduce spending by $10.8 trillion over 10 years and eliminate budget deficits by 2029, as well as permanently extend the Tax Cuts and Jobs Act of 2017 and reduce taxes by $800 billion.

During a second event in which Heritage presented its blueprint to congressional staff, Rep. Jim Banks, R-Ind., drew comparisons between the document and a budget released May 1 by the Republican Study Committee.

“We get a large task force and members with unique perspectives in a room and hash out differences and avoid some of the land mines that might cause some members not to vote for it,” Banks said of arriving at the Republican Study Committee budget.

“And that’s why I think our budget proposal this year is as strong as ever and very important for all of you to pay attention to because it has that broad support and it still balances [in] six years.”

However, neither the RSC budget nor the Heritage proposal has much of a hope of making it onto the House floor for a vote, given the Democrat majority led by Speaker Nancy Pelosi, D-Calif.

“While we wanted to avoid our budget proposal being aspirational per se, we aren’t naive enough to [think] that Nancy Pelosi [is] going to put the RSC budget on the floor,” Banks said.

The Hill reported earlier this month that lawmakers suggested another government shutdown could occur if Democrats and Republicans can’t agree on funding, including a $19 billion disaster aid bill passed May 10 by House Democrats that is opposed by the Trump administration.

The Heritage plan, which would balance the budget within 10 years, would expand the Republican tax reform plan signed into law by President Donald Trump on Dec. 22, 2017.

Specifically, it would end 29 tax subsidies and make permanent both the individual tax cuts and the ability of businesses to fully expense investments in equipment.

“This is something that wasn’t included in the president’s budget but is a really important piece of extending the entire Tax Cuts and Jobs Act going forward,” Adam Michel, senior policy analyst at Heritage’s Hermann Center for the Federal Budget, said during the roundtable.

“And if we can pay down our debt and start balancing the budget, there are real economic dividends beyond all of the other benefits of getting the government out of our lives in various different ways,” Michel said.

“Both budgets undertake comprehensive entitlement reform,” Bogie said in an email to The Daily Signal. “One of the most important aspects is that both budgets balance in 10 years and significantly reduce debt as a share of GDP.”