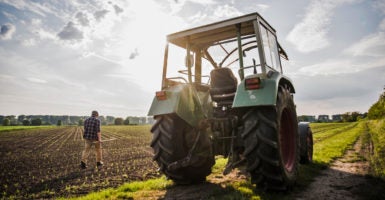 Last July, the U.S. Department of Agriculture announced that it was going to provide $12 billion in aid to help farmers with the “trade damage” from numerous trade disputes.

That was supposed to be a one-time relief package, but there was little reason at that time to think it would stop with the $12 billion.

Sure enough, less than a year later, the USDA is reportedly going to offer another aid package for farmers that could cost as much as $20 billion.

Like before, this special aid package for farmers is misguided. Here are just three reasons why the USDA shouldn’t move forward with this plan:

1. Compounding one mistake with another.

These tariffs drive up prices for Americans. In fact, the very purpose of tariffs is to make imports more expensive. The additional costs on Chinese imports are largely paid by American importers who then can pass those costs on to consumers.

Another major problem is trade retaliation. In response to U.S. tariffs imposed last year, China retaliated with its own tariffs. The Congressional Research Service explained that China “has levied retaliatory tariffs on about 800 U.S. food and agricultural products that were worth about $20.6 billion in exports to that country in 2017.”

Now there’s the increased U.S. tariffs on $200 billion in Chinese imports. In response, China announced that it will impose higher tariffs on $60 billion in American goods, including American food and agricultural products.

The special aid for farmers only makes matters worse. Taxpayers are now going to be required to pay as much as $20 billion more to help farmers offset the damage from the self-inflicted harm caused by tariffs.

These special farm aid “solutions” can lead to a terrible precedent; namely, creating a justification for maintaining and even expanding tariffs, instead of opening up trade opportunities.

In fact, that appears to be happening now.

Farmers certainly are not winners in these trade disputes, including the trade dispute with China. However, they would be getting favorable treatment over other interests and individuals.

These trade disputes are hurting far more people than farmers. For example:

In addition to the inappropriate favoritism, this assistance to farmers creates a slippery slope. There is no logical stopping point as to who should receive special aid.

These special aid packages for farmers seem to ignore the fact that the payments are generally duplicative in nature. Taxpayers already provide about $15 billion a year to many agricultural producers, largely to help insulate some producers—inappropriately—from having to compete in the market.

That includes triggering payments to producers when they do not meet revenue targets or when commodity prices decline.

Soybean producers, who are significantly impacted by China’s retaliation, receive about $2 billion a year already to address revenue and price issues from multiple programs, and they receive the third-most farm program support of all commodities.

Regardless of whether there are tariffs or not, the special aid is a mistake. The U.S. shouldn’t exacerbate the harm caused by the trade disputes.

U.S. trade negotiators should remember what President Ronald Reagan said in a 1988 radio address he delivered to the nation:

Over the past 200 years, not only has the argument against tariffs and trade barriers won nearly universal agreement among economists but it has also proven itself in the real world where we have seen free-trading nations prosper while protectionist countries fall behind.

His powerful words were true then, and they are still true today.