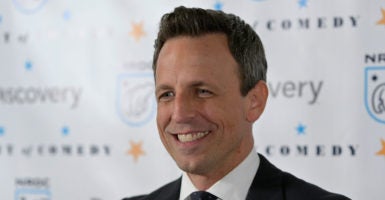 After listening to Seth Meyers run interference for Rep. Ilhan Omar last week, an exasperated Meghan McCain asked him: “Are you her publicist? Are you her press person?” Perhaps the more pertinent question is, “Who else do you represent?”

Because on the same day Rep. Rashida Tlaib was complaining (via her 500,000-follower Twitter account) that powerful forces were “trying to silence” her, the freshman representative also appeared on NBC’s “Late Night with Seth Meyers.”

Tlaib’s presence on “Late Night” is unsurprising, as the show has become something of a safe haven for unaccomplished freshman reps with very specific opinions about a certain ethnicity.

The fact that Meyers, like most of his colleagues, shills for Democrats isn’t particularly noteworthy. What is notable, however, is that the comedian provides someone like Tlaib with a giant platform to spread a despicable historical lie.

“You were talking about the tragedy of the Holocaust and the words you used was it gave you a ‘calming feeling’ because you were happy that it became a safe haven, Palestine became a safe haven for the Jewish people,” Meyers said, framing Tlaib’s comments in the most dishonest way imaginable. “Some criticized the use of ‘calming feeling.’ You have said that it was taken out of context. I want to give you a chance to provide some context.”

No, most people criticized Tlaib for repeating the myth that Palestinians, who had in reality aligned themselves with Nazis to kill Jews in Europe, worked to keep Jews in concentration camps, and massacred them in pogroms, “provided” Jews a safe haven. Yet Tlaib repeated this same fiction on national television, without even the slightest pushback from our truth-seeking host.

“You know, the tragedy of the Holocaust—I mean, the reason why Israel was created was to create a safe haven for Jews around the world and there is something, in many ways, beautiful about, that my ancestors—many had died or had to give up their livelihood, their human dignity to provide a safe haven for Jews in our world. And that is something I wanted to recognize and kind of honor in some sort of way,” Tlaib said.

None of this is true. Now, I assume Meyers knows as much about early Zionist history as a cucumber, but if you’re going to take on big topics, then you have a responsibility to bone up or your audience might be misled.

It could have been interesting, for example, to learn why Tlaib thinks Americans should “honor” those who tried to kill Jews but failed. Really, if you attempt to destroy a people, and you lose the ensuing war, you’re not “sacrificing” anything, you’ve merely made a bad choice.

It’s not as if Tlaib hides her disdain for a Jewish safe haven. The folks Tlaib wanted us to honor for Holocaust Remembrance Day refer to the formation of a Jewish homeland as al-Nakba, or “Day of the Catastrophe,” not “Safe Haven Day for the Jews.” Her stated political position is in opposition to a Jewish state.

Meyers’ audience might not be aware of any of this, since the host employs the popular euphemism “critical of Israel” as a stand-in for “destroy the Jewish state.”

It’s also worth noting that Palestinians didn’t have to lose their livelihoods—in fact, Jews brought with them unprecedented economic opportunity—or their dignity. That was a choice. Palestinians were offered more rights by the Zionists than any Arab ruler had ever bestowed on them, then or now.

In any event, a simpering Meyers insinuated, as he did with Omar, that these obnoxious statements are really just suffering from contextual problems.

By throwing out a softball “what did you really mean” query, Meyers intimates to his audience, who are probably largely ignorant of the broader debate, that Tlaib has been being victimized. And really, that’s what this is all about.

In his interview with McCain, Meyers had lectured “The View” host on how she needed to be more “careful” about her language when criticizing a Muslim woman like Omar, who has repeatedly contended that American Jews are money-driven shills for a foreign power. But Tlaib, a person who claimed to “calmed” by the Holocaust, needn’t be cautioned about her rhetoric, apparently? That is weird.

Meyers isn’t alone, of course. During the same week, The Washington Post, for example, had run four articles defending Tlaib without once being able to muster the strength to write a single line about how her central thesis is rubbish. A string of scholars have noted that Tlaib is making things up or, at best, deeply ignorant. Even CNN was forced to acknowledge that she was defending Nazi collaborators.

Meyers, on the other hand, once again acted as a PR rep. Now I just wonder if he knows that Valerie Plame is looking for a publicist.