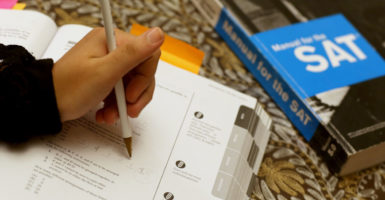 The College Board will add a hidden "adversity score" to its SAT tests. (Photo: Joe Raedle / Staff/Getty Images)

It would be nice to think that high school students can get into a good university based on their abilities or talents, but a proposed change to the SAT shows how the concept of meritocracy has been turned into a sham.

The College Board, according to The Wall Street Journal, will now assign an “adversity score” to SAT test takers, “calculated using 15 factors including the crime rate and poverty levels from the student’s high school and neighborhood.”

“There are a number of amazing students who may have scored less [on the SAT] but have accomplished more,” said David Coleman, chief executive of the College Board, according to The Wall Street Journal. “We can’t sit on our hands and ignore the disparities of wealth reflected in the SAT.”

The adversity rating has already been used by 50 colleges in 2018, but will eventually extend to significantly more colleges.

Every student who takes the SAT will receive this adversity score, according to the Journal, but the students and parents won’t know what it is.

Of course, how something as subjective as “adversity” can actually be boiled down to a number for each person is already dubious.

Worse, it can be so obviously gamed by both students and school.

Clever students and parents may simply find ways to artificially boost “adversity” in any way they can, just as colleges can use this tool to continue what they have rightfully come under scrutiny for in recent decades: race-based admissions.

Race-based admissions systems, even surreptitious ones, could be on the way out as these practices are challenged in court.

For instance, a case against Harvard for screening out Asian students—who typically get better SAT scores, yet are admitted at lower rates—could make its way to the Supreme Court. There is a good chance that the Supreme Court will declare these practices illegal.

The adversity score would make for a convenient way around whatever changes happen in the future.

As Anthony Carnevale, director of Georgetown University’s Center on Education and the Workforce, said according to The Wall Street Journal, it’s easy to see how the purpose of the new system “is to get to race without using race.”

The score’s lack of transparency will only feed into that notion.

The adversity score system makes sense for College Board and diversity-obsessed colleges, but it hardly ensures that our schools will admit and graduate the best and brightest among us.

Students exist to fulfill quotas and keep the gravy train of public funding and backing going for our bloated and oppressively expensive system of higher education (of rapidly declining tangible utility).

And it’s hardly likely to bring any real diversity of backgrounds to our universities.

Does anyone doubt that students coming from super zips, the wealthiest parts of America, won’t still be able to game the system and get access to elite schools?

Finding ways to demonstrate levels of “oppression” will simply become another tool in the arsenal of those in the ruthless rat race to the top, while burying the qualities of what really makes one elite.

Perhaps there’s a reason why our education system struggles to produce individuals like Abraham Lincoln or Frederick Douglass, men who received little or no formal education at all.

Furthermore, the adversity score reinforces the attitude that victimhood is more important than merit or accomplishments, a poisonous characteristic that is now escaping our college campuses and entering the mainstream.

Higher ed, as a whole, deserves a rethink in this country.

As my wife, Inez Stepman, wrote for The Federalist:

Universities appeal to the public purse on the basis that they form better workers and citizens, and take the best from all walks of life on a meritocratic basis for the study of higher things. The reality they offer is a laughable shadow of that promise…

The adversity score just adds another toxic element to a system that makes a mockery out of the idea of meritocracy, and reinforces the concepts of collective identity over individual achievement.