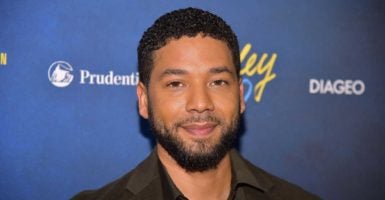 "Empire" actor Jussie Smollett's hoax of the racial and homophobic attacks against him by Trump supporters is just the latest in a long line of racial hoaxes since the 1980s. (Photo: Theo Wargo/Staff/Getty Images)

Don’t let the facts get in the way of a good narrative.

For a time, that’s what happened in the case of Jussie Smollett, a gay, black actor who stars in the show “Empire,” who claimed he was the victim of a vicious and brutal hate crime in Chicago. On Wednesday, Smollett was charged with filing a false police report and disorderly conduct, according to Chicago Police Department spokesman Anthony Guglielmi.

The case received national attention, in part due to Smollett’s celebrity and his immediate openness to the media, and in part because of how media and pundits latched on to the story.

The underlying narrative was that, because of President Donald Trump, violent hate crimes against minorities are rising. Smollett’s story—that he was beaten by two men who poured bleach on him, tied a noose around his neck, and yelled, “This is MAGA country”—fit the narrative just too perfectly, which is why more reservations from the get-go would have served everyone well.

But that skepticism was notably absent. Celebrities and politicians couldn’t help themselves from jumping in to condemn not just the crime itself, but a large section of the American population.

While you won’t hear this from mainstream media, much of the talk about hate crimes lacks crucial context.

For instance, a report released Wednesday by the Southern Poverty Law Center, a far-left organization, claims that there is an all-time high number of hate groups since it began tracking in the 1980s.

Of course, it makes sense that there would be more hate groups on SPLC’s list given that its definition of what constitutes a hate group continues to expand, extending to mainstream social conservative organizations like the Family Research Council and Alliance Defending Freedom.

Furthermore, we have seen numerous hoaxes in recent years—in some cases, misreported incidents that turned out to be different from initial reports. Many of these were compiled on Twitter by Quillette’s Andy Ngo.

Peter Hasson at The Daily Caller News Foundation also catalogued 19 “hate crimes” in the Trump era that turned out much different than the media initially reported. This list included a woman who said a man threatened to light her on fire if she didn’t remove her hijab, which turned out to be untrue, and a Texas waitress who faked a racist note about Hispanics she said she received on a receipt.

It also bears noting that the data on “rising” hate crimes is deeply unclear, as Reason’s Robby Soave has documented.

Soave then explained how one statistic about rising anti-Semitism, which the Anti-Defamation League said had risen 57 percent under Trump, “reflected an increase in bomb threats against U.S.-based Jewish institutions perpetrated by just one person: a deranged Israeli teenager. Anti-Semitic violence, according to the [Anti-Defamation League’s] count, actually decreased 47 percent.”

This is not to say that these sorts of crimes aren’t happening, or that they aren’t actually on the rise. It is just misleading to make such a claim based on the available data.

Unfortunately, too many are willing to make snap judgments, despite the examples of hate crime hoaxes.

Just consider the reaction to Smollett, who has gone from victim to suspect over the course of a month.

Sen. Bernie Sanders, I-Vt., called the Smollett incident “a horrific instance of the surging hostility toward minorities around the country.”

Among the worst takes were from Sens. Cory Booker, D-N.J., and Kamala Harris, D-Calif., who both equated the incident to an “attempted modern-day lynching.”

But then, the story began to unravel. A credible source revealed that Smollett allegedly paid two men to carry out the assault. Both Booker and Harris then pivoted and said we should wait for the facts to come out before rushing to judgment.

But there’s even more reason to doubt Smollett. Back in January, he claimed to have received a racist, threatening letter containing a white substance. The Chicago Police Department has now cast doubt on the authenticity of the letter, which contained crushed Tylenol.

“The two brothers involved in the Jussie Smollett attack told police that Smollett was behind creating a racist letter that was sent to the actor on the set of his show, ‘Empire,’ according to two sources with first-hand knowledge of the investigation,” CBS Chicago reported.

Those two brothers said Smollett orchestrated the fake attack on himself after the letter failed to get a “bigger reaction.”

So, as of this moment, the evidence doesn’t fit the initial story at all.

Sanders, Booker, and Harris were just a few of the countless people who spewed hot takes on the matter and turned out to be egregiously wrong.

It should come as a word of caution to those who were quick to embrace a narrative that implicated large swaths of Americans. If further reports confirm that this was a hoax, it will just be one in a long string that have recently received widespread attention and turned out very differently from how they were initially reported.

If the allegations against Smollett are true, then he has indeed committed a very serious crime. Maybe he is just a disturbed man crying out for help, but his actions have wasted valuable police and FBI resources—not to mention the potential harm that could have been done had the police wrongly arrested someone for carrying out the “attack.”

Perhaps the greatest damage of all has been done to the real victims of such crimes. Whenever a hoax takes place, it becomes that much more difficult for them to be heard and believed.

While Smollett’s motives aren’t completely known, one thing can be said: It’s quite sick that he would rather be embraced as the victim of a hate crime than celebrated for his success as an actor.

This whole episode seems to be an extension of the identity politics culture we’ve seen on college campuses, which promotes victimhood as the main social currency over things like achievement and merit. Being a victim is more valuable than money or accomplishments, which Smollett seems to already have in spades.

One would hope so. Yet this assumes that victimhood chic will eventually die.

Given the growing power of leftist identity politics, it seems natural that incidents like this would, for the time being, become more common, not less.

And this is why it’s highly problematic when we look at stats like rising hate crime and hate groups and have reason to be suspicious when its proponents, so committed to the idea that history bends toward justice, try to convince us that mass violence and fascism are right around the corner.