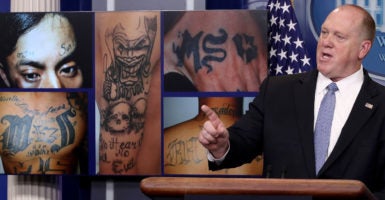 "It's not just about enforcing laws and protecting our sovereignty as a nation, it's about saving lives," Thomas Homan says. Pictured: Then acting director of Immigration and Customs Enforcement, Homan stands in front of photos featuring MS-13 gang signs during a briefing at the White House on July 27, 2017. (Photo: Win McNamee/Getty Images)

Thomas Homan, who served as acting director of U.S. Immigration and Customs Enforcement under President Donald Trump, is an outspoken advocate for stronger border security. Homan spoke to The Daily Signal about the crisis at the U.S.-Mexico border and solutions for fixing it. A lightly edited transcript is below.

Rob Bluey: Why do we need to secure the border?

Tom Homan: We need to secure the border because we’re a sovereign nation. We have to protect our border. We are not a country without borders. This is not just about enforcing the law, it’s about saving lives. What’s happening on the border is not only a humanitarian crisis, it’s a national security crisis.

When the cartels move people across the border, even if they’re family units, they are tying up border control assets. A lot of the border is uncontrolled. It’s not being manned, which means the cartels are pushing drugs and bad people to areas that are unprotected. Not only that, people are dying. We already had two children die trying to cross this border.

If we had true border security, if we had a wall, if we enforce our laws the way they are written, enforcement to the fullest extent, you’ll not only save lives, you’ll secure this nation against harm.

Bluey: What are the three things the Trump administration can do right now to help fix this problem?

Homan: The three things we can do right now to address the border crisis is [first,] change the asylum laws. The threshold to pass your first interview on the border is too low.

Nine out of 10 people will pass that first interview by saying a few key phrases that are taught to them by the cartels and by immigration advocates. But when they get to court, if they show up at court, 9 out of 10 will lose their case because the threshold is much higher. So we need to change that threshold to get it higher.

The second thing we do is address the Flores Settlement Agreement. We need to detain families at a family residential center; not a jail, [but] a center built for families. Detain them long enough to see a judge. If they demand due process, which they have a right to get due process, there’s only one way we can guarantee it: Detain to see a judge. When that judge makes a decision, we need to execute those final decisions.

These three things will solve 90% of the border issues.

Bluey: And finally, why are you personally so passionate about this subject?

Homan: I’m personally passionate about border security issues because I did this for 34 years. I started on the front lines, [as] a Border Patrol agent. Then I spent the next 20 years investigating organizations that traffic in women and children that smuggle drugs and guns into this country.

Then I spent the last eight years in interior enforcement operation, which means I sought those out in the country illegally, detained and removed them.

I lived the entire life cycle of illegal immigration. I know the game. I share stories with people all the time. It’s not just about enforcing laws and protecting our sovereignty as a nation, it’s about saving lives.

I can share many stories with you. One story: I’m standing in the back of a tractor trailer and [see] 19 dead aliens, with a 5-year-old little boy suffocated in his father’s arms. His father also died. So I ask you this one simple question: What do you think went through that child’s mind the last 30 minutes of his life?

Was he begging his father? His father knew his child died in his arms, and he couldn’t do anything about it. What do you think the last 30 minutes of that child’s life was like?

And this happens every day across the border. One in three women are sexually assaulted by these criminal cartels. And the more we entice people to come to this country, the more we don’t secure our border, we are bankrolling the very criminal cartels that have murdered Border Patrol agents and special agents.

Enough. We finally have a president that wants to not only talk the talk, but walk the walk, and secure this border. And let’s support him, let’s secure this border, let’s build a wall. Let’s give the law enforcement agencies the backing they need to enforce the laws, as enacted by Congress, and uphold the oath they took to secure our nation’s borders.