Senate Confirms 3 to Board of Export-Import Bank, Reviving Agency 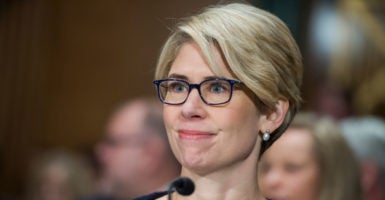 The Senate voted Wednesday to confirm three board members for the Export-Import Bank, reviving—over the objections of conservatives—a controversial federal agency that allows foreign countries to borrow taxpayer dollars.

“The Export-Import Bank is corporate welfare, giving taxpayer subsidies to some of the largest, most politically connected companies in the U.S. and around the world,” Sen. Pat Toomey, R-Pa., said in a statement provided to The Daily Signal beforehand.

Senate Majority Leader Mitch McConnell, R-Ky., had set up votes this week on the three nominees for the Export-Import Bank’s board of directors. The five-member board has not been able to approve loans exceeding $10 million since 2015 because of  three vacancies.

The Senate confirmed President Donald Trump’s nominations of Kimberly Reed as bank president and board chairman and Spencer Bachus and Judith DelZoppo Pryor as board members.

Conservatives in the House and Senate have struggled for years to reform or pull the plug on the 85-year-old bank.

Merely confirming more board members to provide a quorum is not enough, Toomey said.

“By voting to confirm three new Ex-Im board members without enacting any reforms, we will get more of the same,” the Pennsylvania Republican said. “However, this fight is not over. Ex-Im will need to be reauthorized later this year, and I am hopeful that will be an opportunity to impose meaningful and pro-taxpayer reforms on the bank.”

But in a tweet Wednesday, Sen. Chris Coons, D-Del., praised the Senate’s efforts to revive Ex-Im.

“This is a big deal for US manufacturers who rely on the Ex-Im bank to help them export American-made products around the world,” Coons tweeted.

Jeffrey D. Gerrish, Ex-Im chairman and acting president, praised the Senate action in a press release from the bank.

“This is a great day for U.S. exporters, their workers, and their suppliers across the country,” Gerrish said, adding:

Ex-Im has nearly $40 billion worth of export deals in the pipeline that can move forward in support of hundreds of thousands of American jobs. The Senate’s bipartisan votes today renew opportunities for U.S. exporters to compete on a level playing field in markets and industries where China and other nations are aggressively supporting their exporters. With Ex-Im restored to full functionality, our exporters again have a fighting chance to win export sales on the fair basis of quality and price instead of on the availability of government-backed financing.

Several of Trump’s economic advisers, including Peter Navarro and Larry Kudlow, supported reviving the bank because they see it as a “critical tool to help the U.S. compete with countries like China that have their own export financing arms,” Politico reported.

But Sen. Mike Lee, R-Utah, pushed back on that position in a speech Tuesday on the Senate floor.

“Many Americans might be surprised to learn that some of their tax dollars are going directly to Chinese companies,” Lee said. “And that some of those dollars even go to corporations owned by the Chinese government, like Chinese banks, Chinese development agencies, and Chinese microprocessor factories.”

The Export-Import Bank was founded in 1934 amid the Great Depression to help struggling exporters in the U.S. facilitate international trade, Lee noted, but the agency has become a disservice to Americans and the economy.

“The institution has unfortunately been used as a giant tool for corporate welfare,” Lee said. “Ex-Im has operated to benefit the wealthiest, most politically connected businesses in America, as well as their overseas clients and foreign governments.”

Diane Katz, a research fellow in regulatory policy at The Heritage Foundation who has written extensively on the bank, said in a recent commentary that it has aided only 2% of U.S. exports.

But the last thing we need from Congress is more cronyism—especially subsidies to benefit foreign governments such as China that threaten national security. U.S. exports have boomed without Ex-Im support.

Jessica Anderson, vice president of Heritage Action for America, the lobbying arm of The Heritage Foundation, said that reviving the Export-Import Bank is not in the best interests of the American people.

“The Export-Import Bank puts big corporations and foreign countries like China ahead of American businesses,” Anderson said. “It’s a prime example of the swampy Washington politics that Americans loathe and elected President Trump to put an end to. The bank should remain shuttered and Congress should let its authorization lapse, sending this wasteful institution to the waste bin.”