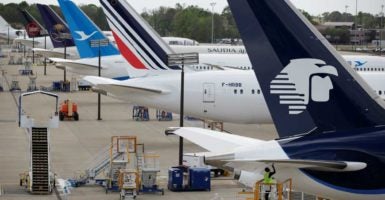 Aeromexico will recieve a medium-term transaction from the Ex-Im bank, though its nature is unknown. (Photo: Randall Hill/Reuters/Newscom)

The annual conference of the Export-Import Bank begins Thursday, which is an opportune time to catch up with the federal agency that doles out billions of dollars in subsidies to benefit foreign governments and titans of industry.

Of particular interest are transaction details that the bank won’t reveal, as well as its relatively limp support for small business.

Over at the bank’s downtown District of Columbia headquarters, most everyone is concerned about what President Donald Trump will do.

The Ex-Im charter is authorized through September 2019, but there are three vacancies on the five-seat board of directors. The lack of a quorum limits the size of bank deals to $10 million or less, including export loans and loan guarantees as well as capital and credit insurance. (That’s how it is supposed to work, in any event.)

Ex-Im opponents are hoping that the president will, at the very least, maintain the status quo—although the best course of action would be to eliminate the bank altogether. (More on that below.) But the Ex-Im lobby is pushing for Trump to nominate board candidates and negotiate their Senate confirmation. Doing so would free up billions of dollars in subsidies for Boeing Co., General Electric Co., Caterpillar, and the like—that is, multinational corporations that do not lack access to capital and which can finance exports without taxpayer handouts.

On the other hand, Congress could—at least conceivably—exercise leadership and phase the bank out of existence. It is not as if there is a shortage of private export financing: U.S. exports totaled $2.2 trillion in fiscal year 2016, with Ex-Im supporting just 0.22 percent ($5 billion).

Who benefitted from that $5 billion? Ex-Im officials are keeping mum, although the transactions are supposed to be public. But if allowed to operate in secret, citizens and their representatives in Congress cannot determine whether the bank is complying with the $10 million transaction limit or with the other rules it has violated in the past.

The Heritage Foundation made repeated requests in the past five weeks for information on 48 transactions in fiscal year 2016 that far exceeded the $10 million limit. For example, both JPMorgan Chase & Co. and TD Bank, N.A. were awarded a whopping $500 million on Dec. 14, 2015, and Wells Fargo & Co. was awarded $200 million on the same day. Several others were awarded between $15 million and $150 million.

According to Ex-Im officials, some of the awards in question represent taxpayer-backed insurance for U.S. banks that issue letters of credit used overseas to finance foreign firms’ purchases of American exports.

However, Ex-Im’s public database does not identify the borrowers or exporters, products or countries, involved in at least half of those 48 transactions, and multiple requests for details were in vain.

Ex-Im representatives claim that prior boards of directors have authorized bank staff to unilaterally approve short-term transactions that exceed $10 million. But they also said that individual transactions under this so-called delegated authority are subject to limits of $10 million for corporate entities, $25 million for financial institutions, and $35 million for sovereign entities.

Alas, without transaction details, neither Congress nor the public can determine whether the awards of $500 million, $200 million, $150 million, and the like were proper.

Also in fiscal year 2016, there were five transactions listed in the bank database as approved by the board—although there was no board quorum to approve deals at the time.

The one medium-term transaction, for Aeromexico, refers to an amendment to a transaction approved by the board in 2014, according to an Ex-Im representative. The nature of the amendment is unknown, although the representative did say that Ex-Im staff exercised their (supposed) delegated authority to approve the (supposedly proper) amendment.

Throughout the two-year debate over reauthorization of the Ex-Im charter, proponents incessantly claimed that small business was the bank’s “core mission.” That simply wasn’t true. Just 20 percent or less of total financing went to small businesses. But lacking a quorum, and thus barred from dispensing billions of dollars in export subsidies to the big guys, one might think that bank officials would maximize its small-business assistance.

But that didn’t happen. The bank reported $2.7 billion in authorizations to benefit small business in fiscal year 2016, which was about half of the level of small-business support from two years before. Obviously, they aren’t banging down Ex-Im’s door for help.

The vast majority of small-business exporters do not need—and do not receive—taxpayer subsidies. Indeed, small businesses ranked “exporting my products/services” as the least problematic of 75 business problems assessed in an annual survey by the National Federation of Independent Business Research Foundation. The cost of health care ranked as the most severe problem.

The debate about Ex-Im isn’t about helping small business. It is about the powerful bond between big business and big government. Ex-Im subsidies are neither the biggest nor worst manifestation of corporate welfare. But change in Washington is tortuous, and ending Ex-Im is a practical and rational target at present for reasons both material and ideological.

Despite overwhelming evidence to the contrary, some members of Congress believe that a few legislative tweaks will remedy all that is wrong with the bank. Ex-Im officials have thwarted past attempts by Congress to impose reforms.

More importantly, no amount of bureaucratic tinkering can shield taxpayers from bailouts in the event that bank reserves run dry—as occurred in the 1980s—nor will it protect American businesses from the disadvantages of the U.S. government subsidizing their foreign competitors.

There isn’t an economist alive who could coherently argue that Ex-Im subsidies don’t distort credit and labor markets—and always to the detriment of those who remain independent of the welfare state. That is why Trump and Congress must eliminate the bank, both to prove that cronyism can be restrained, and because it would most benefit the nation.