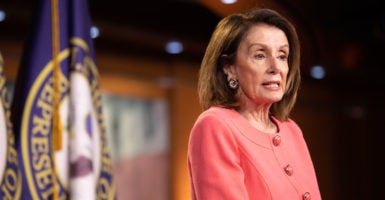 “What is deadly serious about it is the attorney general of the United States of America was not telling the truth to the Congress of the United States,” says House Speaker Nancy Pelosi. “That’s a crime.” (Photo: Aurora Samperio/NurPhoto/ Getty Images))

Disappointed with, frustrated by, and angry at special counsel Robert Mueller’s unhelpful conclusion that President Donald Trump was not in cahoots with the Russians during the 2016 campaign, Democrats are desperately searching for something, anything, that they can use to impeach the Mueller report by impugning the integrity of Attorney General William Barr.

House Speaker Nancy Pelosi went so far Thursday as to accuse Barr of committing perjury when he answered a question by Rep. Charlie Crist, D-Fla., of the House Appropriations Committee on April 9.

She is flat wrong.

Crist started by asking Barr several questions about the statement in his March 24 letter that the special counsel’s report does not “exonerate” Trump. After the attorney general answered those inquiries, the following exchange occurred:

Crist: Reports have emerged recently, General [Barr], that members of the special counsel’s team are frustrated at some level with the limited information included in your March 24 letter, that it does not adequately or accurately necessarily portray the report’s findings.  Do you know what they’re referencing with that?

Barr: No, I don’t.  I think, I think, I suspect that they probably wanted more put out. But, in my view, I was not interested in putting out summaries or trying to summarize because I think that any summary, regardless of who prepares it, not only runs the risk of, you know, being underinclusive or overinclusive, but also, you know, would trigger a lot of discussion and analysis that really should await everything coming out at once.

So, I was not interested in a summary of the report, and, in fact, at the time that I put out my March 24th letter there was nothing from the special counsel that wasn’t marked as potentially containing 6(e) material, and I had no material that had been sanitized of 6(e) material.  So, I felt that I should state the bottom line conclusions, and I tried to use special counsel Mueller’s own language in doing that.

The following day, Sen. Chris Van Hollen, D-Md., had the following exchange with Barr at a different hearing.

Van Hollen: Mr. Attorney General, the thing is you put this out there. I mean the president went out and tweeted the next day that he was exonerated. That wasn’t based on anything in the Mueller report, with respect to obstruction of justice. That was based on your assessment. That was on March 24th. And now you won’t elaborate—at all, as to how you reached that conclusion. Because I’m not asking you what is in the Mueller report, I’m asking you about your conclusion. Let me ask you this—

Barr: And I will discuss that decision after the report is out—

Barr: I don’t know whether Bob Mueller supported my conclusion.

Various Democrats have now claimed that Barr committed perjury in those exchanges. Pelosi tweeted, “Nobody is above the law—especially not the attorney general. AG Barr’s decision to lie to Congress is deadly serious.”

The basis for that claim is that Mueller sent Barr a letter, received by the latter on March 28, four days after Barr sent his letter to Congress, in which Mueller said that “The summary letter the Department sent to Congress and released to the public later in the afternoon of March 24 did not fully capture the context, nature, and substance of this Office’s work and conclusions.” Now, Barr is said to have twice lied to Congress.

The claims that Barr’s statements constitute perjury are fantasies.

Crist started by making a statement about “reports,” presumably by the media, that members of the special counsel’s team were “frustrated at some level” by the adequacy or accuracy of Barr’s March 24 letter.

When the congressman asked his question, he said, “Do you know what they’re referencing with that?” He did not specify whether the “they’re” referred to the authors of the reports (presumably the media) or the special counsel’s staff (presumably the source of whatever degree of “frustrat[ation]” was being leaked).

Barr then said that he did not know, but then went on to say that any frustration was likely due to the relatively terse explanation that he gave in his March 24 letter of the special counsel’s conclusions and why he did not, and legally could not, offer a more expansive explanation for fear of breaking the law by disclosing grand jury material. Crist then moved on to a different question.

That is not remotely perjury. Perjury requires the government to prove that a person under oath willfully lied about an issue of fact that is material to the issue under discussion. No reasonable person would find that Barr committed perjury.

(To start with, Crist’s question was ambiguous because he referred to two different groups” as “they’re.” Crist should have been specific as to which group he referenced. But even putting that aside, if Barr construed the question as referring to the special counsel’s staff, he still answered correctly.)

Here’s the key thing: The special counsel’s March 27 letter did not say that Barr’s March 24 letter was inaccurate in any way. In fact, as Barr explained, Mueller denied making any such claim when he and Barr spoke on March 28.

The March 27 letter also did not identify what additional facts were necessary to lay out “the context, nature, and substance of the office’s work and conclusions” to the satisfaction of the special counsel and could be disclosed consistently with the law—Federal Rule of Criminal Procedure 6(e), which prohibits the disclosure of grand jury material, as the U.S. Court of Appeals for the District of Columbia Circuit recently held. Like a young writer miffed that an editor had the effrontery to jettison some of his words, the special counsel said, in effect, “Just use my summaries.”

Aside from the fact that Barr was right to label the March 27 letter as “snitty,” Barr was also right to say that he did not have any specifics about the special counsel’s complaint. He concluded that he could not use unsanitized summaries because they might have contained grand jury material, and he quite reasonably decided that time would be better spent eliminating nondisclosable material from the full report.

Mind you, the special counsel’s office did not complain that Barr’s March 24 letter was inaccurate, only that, because it was terser than he (read: likely some of his staff) would have liked, the press had misread it.

Barr made that point to Crist and explained why he disagreed with that criticism. Barr did not perjure himself in doing so. Period.

Now let’s review the exchange between Van Hollen and Barr.

The claim that Barr committed perjury in this regard is utterly frivolous.  Van Hollen asked Barr whether Mueller supported Barr’s “conclusion,” which Barr denied knowing.

The only “conclusion” relevant to exchange was Barr’s conclusion that the Justice Department did not have sufficient evidence to prove that the president obstructed justice. Any disagreement between the special counsel’s staff and the attorney general was over the amount of discussion that the March 24 letter should contain, not over the “conclusion” that it drew over obstruction.

What does this new claim of perjury teach us? Barr was right to complain about the politicization of the criminal justice process. People who grasp at straws to persuade the public that the criminal justice system should condemn incumbent, elected, or appointed government officials whom they disagree with are people who have nothing to persuade voters that those officials are wrong on the merits.

Abraham Lincoln once criticized as “fiend[s]” persnickety lawyers as “who habitually overhauls the register of deeds in search of defects in titles, whereon to stir up strife, and put money in [their] pocket[s]?”

He could also have been describing the people who claim that Barr lied to Congress. The only differences are that critics are flyspecking every word Barr uttered, rather than lines in a deed, and, as Sen. Lindsey Graham, R-S.C., said last fall in a different context, the critics want power, not money.  That is equally immoral, but even scarier.