This Labor Department Decision Could Save Uber, Lyft, and Other App-Based Platforms 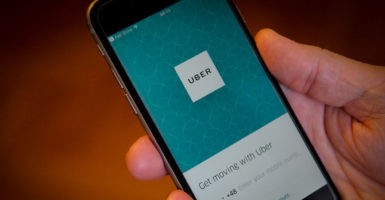 The Department of Labor issued an opinion Monday that gig workers are independent contractors, not employees. (Photo: NurPhoto/Getty Images)

Internet platforms and their workers are facing a tough question that is unique to our time: Are gig workers, such as Uber drivers and TaskRabbit providers, independent contractors or employees?

The answer to that question has far-reaching implications, including potentially the end of gig work altogether. If gig workers are deemed “employees” under law—as some activists would like—it would hurt gig workers’ ability to be their own bosses and establish their own working conditions, undermining the entire flexible gig economy model.

This week, the Department of Labor weighed in for the better.

In an opinion letter issued on April 29, the department’s Wage and Hour Division applied a six-factor test, based on Supreme Court precedent, to conclude that workers who supply their services through a “virtual marketplace company” or internet platform are, in fact, independent contractors under the Fair Labor Standards Act.

The Department of Labor’s opinion is in line with how most gig workers are already classified. It’s good news for them, as well as the platforms they offer their services on and customers who use them.

The Department of Labor’s opinion rests on the fact that gig workers do not actually work for platforms like Uber and TaskRabbit, but rather, these platforms offer a “referral system” that allows workers and consumers to contract with each other. The platforms simply reduce transaction costs, helping workers and consumers to connect more easily with each other to exchange services for compensation.

The Department of Labor supports this classification in large part for the following reasons:

Gig workers are the ones in control, and are economically independent from platforms.

A key factor in determining an employment relationship is just how much control a potential employer has over the worker. Gig workers are extremely independent. They choose if, when, where, how, and for whom they will work with complete autonomy. They are in control, not the platform.

Gig workers also acquire the skills they offer to consumers on their own, without receiving any training from the platforms they use. And, as the Department of Labor notes, they control “the major determinants of profit and loss.” They control, for instance, which jobs to accept, at what rates, and through which platforms to sell their services—all aspects that determine their compensation.

Gig work is temporary and flexible by nature.

Gig workers have the freedom to enter into and out of employment relationships at will, with complete flexibility. Uber drivers can drive for Lyft at the same time, including choosing which platform to use to pick up a customer at a moment’s notice.

Likewise, TaskRabbit workers are free to advertise their services on any other platform, including on Craigslist, and can choose the jobs that appeal most to them. Gig workers are never in a permanent employment relationship with virtual marketplace companies.

Gig workers supply their own resources needed to perform their work.

Platforms do not provide any equipment, facilities, or helpers to gig workers, nor will they reimburse them for employment-related expenses. Platforms only provide software that connects gig workers and consumers. Gig workers are in business for themselves, including providing all of their necessary supplies.

Trial lawyers and labor unions have filed lawsuits attempting to reclassify gig workers as employees. This would impose very different burdens on platforms than is currently the case.

Employers are responsible for covering employees’ expenses, paying the employer share of the payroll tax, paying federal and state unemployment taxes, and are often required to provide certain benefits, including health care and access to company retirement accounts governed by complex rules. Employers are also required to pay certain workers overtime and at least the minimum wage.

If virtual marketplace companies or platforms were required to treat service providers as employees, this would greatly reduce the control and flexibility that has attracted gig workers to these platforms in the first place. Platforms would have to take more control of workers’ schedules and other work-related activities, such as containing supply costs and ensuring that the work done covers the costs to the platform of employing the worker.

Simply put, many gigs would disappear.

A recent working paper on the value of flexible work showed that Uber-style job platforms attract a much higher supply of labor than other job arrangements, resulting in a surplus—or “flexibility value”—equal to between 38% and 50% of workers’ total earnings. Gig workers have flocked to this arrangement because they value the flexibility it offers.

Reclassifying gig workers as employees would take away valuable job opportunities, including the important and highly valued ability for gig workers to be their own bosses.

The Department of Labor’s opinion letter provides clarification on this important issue, but without Congress writing it into law, a future administration could reverse this essential component of the flexible gig economy.

To cement this worker clarification in law, Congress should clarify the test for independent contractor status under the Fair Labor Standards Act, the National Labor Relations Act, and the tax code.

Those who decide when, where, and how to work—and are free to work for other companies—should be recognized as independent contractors.