Rep. Rashida Tlaib: I Was ‘Really Afraid of My Fellow Americans’ After 9/11 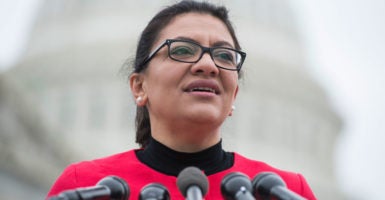 “I was probably in my second year of law school when 9/11 happened and I was really terrified of what was going to happen to my husband, who was only a green card holder at the time,” Rep. Rashida Tlaib, D-Mich., says. (Photo: Tom Williams/CQ Roll Call/Getty Images)

Democratic Michigan Rep. Rashida Tlaib revealed in an interview she was “terrified” for herself and her family after the Sept. 11 terror attacks that left nearly 3,000 Americans dead.

“I was probably in my second year of law school when 9/11 happened and I was really terrified of what was going to happen to my husband, who was only a green card holder at the time,” Tlaib said during an interview with Makers, a media company founded to “accelerate the women’s movement.”

“I immediately called my brothers and told them to be very careful who you hang out with,” she continued. “Telling my sisters, ‘Just be real careful out there,’ and being really afraid of my fellow Americans.”

Tlaib, along with fellow Democratic Minnesota Rep. Ilhan Omar, became America’s first Muslim congresswomen when sworn into office in January. Their time in office has been embroiled in allegations of anti-Semitism and anti-American sentiments.

Tlaib came to the defense of Omar after the Minnesota congresswoman was accused of downplaying the 9/11 terror attacks that were perpetrated by radical Islamic terrorists.

The controversy kicked off after Omar delivered the keynote speech at a fundraiser for the Council on American-Islamic Relations on March 23. A video from the event was uncovered weeks later where Omar was shown urging Muslim Americans to “raise hell” and “make people uncomfortable.” Omar faced backlash after a part of the speech surfaced where she described the Sept. 11 attacks as merely an event where “some people did something.”

Tlaib consequently blamed the outrage over Omar’s statements on racism, claiming people “do this all the time to us, especially women of color. They do that. They take our words out of context because they’re afraid, because we speak truth.”

Tlaib has also received widespread criticism for her ties to anti-Israel and terror-affiliated activists. Pro-Hezbollah, anti-Israel activist Abbas Hamideh said he attended her swearing-in ceremony and the following private dinner, and Tlaib hosted in her congressional office Joe Catron, an avowed supporter of multiple Palestinian terrorist organizations such as the Popular Front for the Liberation of Palestine, Hezbollah, and Hamas.

She is also a member of multiple anti-Semitic social media groups, including the Facebook group “Palestinian American Congress,” where members frequently demonize Jews and Israel. The founder of the aforementioned Facebook group, Maher Abdel-qader, is a Palestinian activist and was a key fundraiser for Tlaib’s 2018 congressional campaign.

Like Omar, Tlaib has fundraised for CAIR, a notable pro-Palestinian organization with ties to Islamic terror groups. The U.S. Department of Justice listed CAIR as an unindicted co-conspirator in funding millions of dollars to the terrorist organization Hamas. Additionally, the United Arab Emirates named CAIR a terrorist organization along with al-Qaeda and the Islamic State in 2014.

“[9/11] really pushed me to be more involved and I got really curious and really angry,” Tlaib continued to Makers. “I think that combination got me in front of a number of issues in the city of Detroit.”