The Fed Should Have Only 1 Mandate: Monetary Neutrality 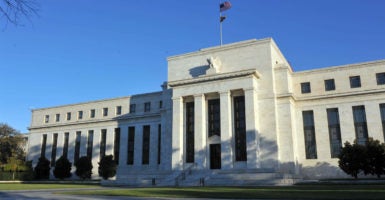 Instead, the Fed’s goal should be monetary neutrality—namely, supplying the amount of money the economy needs to keep moving, no more and no less.

To help the Fed achieve this goal, Congress should give the Fed the single mandate of achieving monetary neutrality by stabilizing overall spending in the economy.

The following benefits—explained in greater detail in this backgrounder—are among the advantages of such a framework:

An inflation-targeting central bank, on the other hand, always tries to push the price level higher to avoid falling prices.

A central bank that targets total spending responds correctly in such a situation: It allows prices to rise, thus signaling that goods have become relatively scarce and that there is a strong demand for such goods.

This new framework requires the central bank to provide the money people need to maintain their level of spending in the face of the supply shock.

A central bank that targets total spending avoids this error and focuses instead on stabilizing the overall economy. This approach—keeping the level of total spending on a stable trend—helps to smooth out economic downturns and avoid unsustainable booms, thus fostering the economic conditions that are most conducive to maximum employment.

The straightforward nature of this framework would greatly improve the transparency of monetary policy for the general public.

Regardless of these advantages, many policymakers remain skeptical of requiring a central bank to target total spending. After all, virtually all central banks now target inflation, a shift that coincided with relatively low and stable inflation.

To assist policymakers in sifting through the pros and cons, here is a brief discussion of the main critiques of targeting total spending:

While more frequently released economic data is generally better for policymakers, the Federal Open Market Committee currently meets eight times per year. It is not necessarily the case that adjusting its policy stance on a quarterly basis would be an inferior approach.

Scott Sumner has also proposed a futures market for dealing with this problem. Ultimately, the data critique applies more directly to the government’s data-compilation processes than to the policy of targeting total spending.

It is impossible to pick the right starting point for the growth path. Some critics of targeting total spending argue that there is no way to objectively choose a growth path, thus leading to either too much or too little money in the economy.

While it is true that there is no objective way to choose between, for instance, a 2% growth path and a 4% growth path, choosing an inflation target presents essentially the same problem. Ultimately, this choice matters much less than having total spending grow in a steady and predictable manner.

A stable level of total spending—one that grows at a moderate and steady rate—helps to avoid both recession and unsustainable booms.

Picking the wrong growth path can lead to inflation problems. Similar to the previous critique, opponents of targeting total spending have worried that such a policy might cause higher inflation, thus destabilizing the economy.

Thus, the fear is that if (for any reason) real growth slows to near zero, then a central bank targeting 5% growth in total spending will create inflation of 5%.

While it is good to fear runaway inflation, a central bank that sets a target for total spending still helps to anchor inflation expectations. If, for instance, the central bank credibly commits to a 5% nominal spending-growth target, the most inflation it will tolerate is 5%.

More importantly, in such a case with zero real growth and 5% inflation, the problem would still be that the economy is stalled, not that inflation is too high. Finally, such inflation fears ignore the fact that inflation is the wrong economic variable for a central bank to stabilize.

Targeting total spending assumes the Fed can—and should—drive the economy. Some policymakers oppose requiring the central bank to target total spending because it appears akin to some type of central planning.

Put another way, the goal of targeting total nominal spending is to minimize the harm that an unstable currency (of which the Fed is the monopoly supplier) can do to the real economy.

It is precisely the same goal—though using a different nominal target—that inflation targeting or, for that matter, a gold standard espouses.

The Fed’s Track Record Is Less Than Perfect

Many people fear requiring what appears to be a major shift in the way the Federal Reserve operates because of the Fed’s apparent success at taming inflation in the 1980s.

It is true that relatively low and stable inflation followed a very turbulent period in the 1970s, but focusing only on this time period—or even the post-World War II period—is very shortsighted.

More broadly, although recessions in the U.S. were more frequent in the pre-World War I era than in the post-World War II period, this comparison omits roughly 30 years that included the Great Depression.

When the entire Federal Reserve period is compared with the full pre-Fed period, the frequency of recessions has not decreased.

Even when the interwar period is excluded, updated data suggest that the average length of recessions, as well as the average time to recover from recessions, has been slightly longer in the post-World War II era than in the pre-Fed era.

Internationally, the overall track record for central banks maintaining economic and financial stability also leaves a bit to be desired.

For instance, according to Carmen Reinhart and Kenneth Rogoff, one or more nations experienced a banking crisis in more than half of the 100 years that made up the 20thh century. (See pages 54 to 57.)

And, of course, the 21stt century didn’t exactly start out on the right foot.

It is also important for policymakers to realize that monetary policy is far from a well-established and settled science.

As discussed in Michael Woodford’s critically acclaimed “Interest and Prices: Foundations of a Theory of Monetary Policy,” published in 2003, central banks did not begin adopting inflation targeting until the 1990s. (The Federal Reserve actually made a huge splash in 2012, when it announced it would formally start targeting inflation.)

As Woodford explains, during this time period, the central banks adopting inflation-targeting “found themselves in need of a clear theory of how they can best achieve their objectives.” (See page 3.)

Moving to a new framework, therefore, would not be greatly out of line with the way central banks have operated in the past.

Given the existing centrally managed fiat-money framework in the U.S., Congress can greatly improve monetary policy by replacing the Fed’s dual mandate.

In its place, Congress should give the Federal Reserve the single goal of achieving monetary neutrality through targeting overall spending in the economy.