America Is Still Highly Religious. So Why Do We Keep Liberalizing? 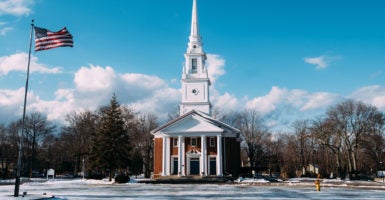 "Despite our religiosity, we continue drifting in Europe’s direction on issue after issue," writes Daniel Davis. (Photo: ricardocostaphotography/Getty Images)

German philosopher Friedrich Nietzsche once declared that “God is dead … and we have killed him.”

That famous statement rocked Europe nearly 150 years ago. His point was not that God actually died, but that people in the Western world no longer believed in God, and that this loss of faith would only spread.

Nietzsche’s prediction largely has panned out in Western Europe, where only 15% say they believe in God with absolute certainty. But America has been an exception to this trend, and remains so today.

A whopping 63% of Americans say they believe in God with absolute certainty, according to Pew Research. And although only 11% of Western Europeans say religion is very important in their lives, 53% of Americans say it is for them.

What’s more, new data shows that Americans actually want religion to play a larger role in society than it currently does. According to a new Pew study released Monday, roughly half of Americans say they favor a greater role for religion in society, compared to only 18% who say they oppose that.

That’s a surprising number, particularly when compared with countries in Western Europe, which are not so hot on religion.

But before we start cheering for American exceptionalism, we need to recognize something is deeply awry.

Yes, America is much more religious than Western Europe, but that doesn’t seem to be making much difference on the big-ticket cultural issues of the day. Despite our religiosity, we continue drifting in Europe’s direction on issue after issue.

Despite our religiosity, we continue drifting in Europe’s direction on issue after issue.

Consider marriage. Same-sex marriage took hold in 13 European countries before it reached the United States. The U.S. lagged, but not for long. Public opinion in the U.S. has flipped in the last 20 years, from 60% opposing same-sex marriage in 1998 to 67% now supporting it, according to Gallup.

Or consider gender. Americans are becoming more accepting of transgenderism as pop culture, media, and schools promote the idea that gender is based on feelings, rather than an objective standard tied to biology. The result: 46% of millennials now say gender identity is a matter of choice.

Most Americans also are fine using transgender pronouns. An Ipsos survey from 2017 found that only 1 in 5 Americans would use the pronoun of a transgender person’s biological (real) sex, and even fewer would do so in Canada and the United Kingdom.

This cultural change has come at a dizzying pace, and it raises the obvious question: If America is so religious, why does it keep liberalizing on all the hot-button cultural issues? To put it crassly, what good is our religion?

The answer, it would seem, is not much good at all.

This is the argument that columnist Ross Douthat has made in pointing out the rise of “bad religion” in America. He notes that while we aren’t secularizing like Europe, we also aren’t strictly adhering to traditional forms of religion. Instead, we are “a nation of heretics.”

Americans increasingly view religion as a subjective thing with no bearing on the actual world. A recent study by Ligonier Ministries and Lifeway Research found that 6 out of 10 Americans say they think religious belief is a matter of personal opinion, not objective truth. Perhaps most shockingly, one-third of those identified as evangelical Christians also take this view.

This is the core problem, and it explains the paradox of America as a country with both vibrant religion and a liberalizing culture.

What we have in America is a radical separation of God from “reality”—the real world that we claim to live in. It’s not that we reject “God” per se, but we reject a God who comes with a certified worldview package—a God who orders the universe, sets moral norms, defines our being, and binds our consciences to a moral code in this world—today.

It’s not that we reject “God” per se, but we reject a God who comes with a certified worldview package.

The problem is, this is almost the same as rejecting God completely. If believing in God has no impact on the way we view realities in this world—whether they be gender, marriage, or who counts as a person worthy of dignity and respect—then what God are we even worshipping?

Could it be that the atheists are right when they accuse us of worshipping a God of our own making?

The Tremors to Come

Nietzsche predicted that the spread of atheism in Europe would shake Western civilization to its core. He understood quite well that his culture had been shaped at every turn by Christian belief, and that pulling the rug from under that belief would send society tumbling like a Jenga set.

Nietzsche illustrated this in his “Parable of the Madman,” in which a prophetic figure—the Madman—hails the death of God. But the Madman goes further. He warns that tumult and chaos will emerge when people finally realize the consequences of their unbelief. Almost in pain, he says:

“What did we do when we unchained this earth from its sun? Whither is it moving now? Whither are we moving? Away from all suns? Are we not plunging continually? Backward, sideward, forward, in all directions? Is there still any up or down? Are we not straying, as through an infinite nothing?”

But then, realizing his listeners have no idea what he’s talking about, the Madman takes a step back.

“I have come too early,” he said them; “my time is not yet. This tremendous event is still on its way, still wandering; it has not yet reached the ears of men. Lightning and thunder require time; the light of the stars requires time; deeds, though done, still require time to be seen and heard. This deed is still more distant from them than most distant stars—and yet they have done it themselves.”

It took more than a century, but the West is now feeling the tremors of unbelief. The lightning and thunder are raging as realities once known and cherished are lost—dissolved by the acids of secularism.

This secularism is more pronounced in Europe, no doubt. Yet it wields extraordinary power in America because so many of us—even religious believers—have conceded vital ground, saying that divine truth has little or nothing to do with this world. In relegating “belief” to the realm of private opinion, we have made our bed and are now living in it.

There will be many more tremors yet to come. The unborn, gender, and marriage are just the first to come under attack. In so many more ways than we realize, we continue to live off the remnants of a Judeo-Christian worldview that has set sail.

In relegating “belief” to the realm of private opinion, we have made our bed and are now living in it.

We would do well to remember Europe before the coming of Christianity. In Plato’s Greece, pederasty was widely practiced and accepted. Dignity was not recognized to be universal. Slavery was accepted. Might, very often, made right.

Nietzsche knew that the “death of God” meant such things would be back on the table in the West. And so they are.

Consider these questions: Without God-given dignity for each individual, what happens to consent as the basis for modern sexual ethics? The right of the strong over the weak already is granted as the basis for abortion—why not to the stronger party in bed?

What about the human-animal distinction? Without real value differences between the species (we’re all the same stuff, anyway), why not blur the lines between species? Why not create hybrid human species in the lab?

The questions we face are more serious than we can fathom. America’s high levels of religiosity are cause for great hope, but also caution.

Many of our religious communities have not yet compromised with the cultural left on the major issues of the day. These communities offer a vital connection to the past and the resources for cultural recovery and renewal, should our culture become disillusioned with its current direction.

The surprising fact is that Americans actually want a greater role for religion in society, per the Pew study. Perhaps this may signal the beginnings of cultural regret—or at the very least, a yearning for something that’s been lost.

But if Americans return to traditional religion out of disillusionment, they will have to accept the strings that come attached—the package deal. This will mean allowing the divine to speak directly to our daily, real-world affairs, to matters of gender, marriage, the nature of the person, and more—to live as a nation, really and truly, under God.

Is that a bargain America will soon make? One can hope and pray.