Trump Might Release His Health Plan Soon. Here Are 7 Ways to Make It Succeed. 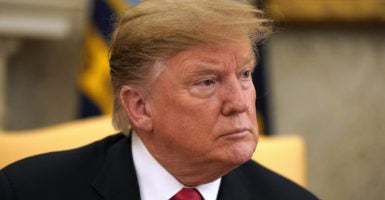 That’s good news. Republicans may have failed to pass reforms in 2017, but health care nonetheless remains a major concern for Americans. In fact, it was the No. 1 issue in last year’s midterm elections.

Since the failed reform effort in 2017, we’ve spent a lot of time working with colleagues across the country to develop a consensus proposal that could succeed where the previous effort fell short. It’s required some hard thinking about the lessons of previous efforts, as well as the failures of implementing Obamacare.

Here are 7 lessons we’ve learned that will serve policymakers well.

Health care remains a top priority for about 70% of Americans. They worry about being able to choose quality care and coverage, and fear that they or someone they love will lose the ability to see their doctor or use their insurance plan if they get sick.

The left is clear on its answer to these concerns: Double down on Obamacare’s failures. Sen. Bernie Sanders, I-Vt.—along with 14 Senate co-sponsors and almost half of House Democrats—would replace Obamacare by outlawing our existing coverage and putting all of us on a new government-run plan.

These are not solutions to Americans’ concerns. Rather, they deliver on many of their worst fears—including longer wait times for care and fewer options for it.

To counter the left, conservatives should explain both why liberals’ solutions won’t work and why their alternative is better. Without clear alternatives, conservatives risk handing victory to those campaigning for a single-payer plan.

2. Release a proposal with a clear vision, goals, and measurable outcomes.

Polling data strongly show that Americans think a healthy America is a strong America. They want a best-in-class health care system that lets them choose the coverage that is best for them and their families, pay lower premiums, access private coverage over government-run health programs, and help vulnerable people get care.

Americans want to remove health care decision-making from Washington bureaucrats and insurance company executives, and give it to families, the states, small businesses, and nonprofits.

Any conservative plan must show it meets these criteria. It must put families and individuals in the driver’s seat, lower premium costs substantially, expand choices, do no harm on coverage levels, and help the vulnerable, including the poor, the sick, and those with pre-existing conditions.

The Health Care Choices Proposal—that we and scores of policy innovators across the country support—would deliver on those goals. Research by The Heritage Foundation shows that Americans respond well to this vision. Here’s how likely they are to support these core policy ideas:

3. Build on past success.

The president has already made a number of regulatory changes that expand health care choices, protect the vulnerable, and reduce costs.

For instance, the administration’s rule on short-term plans gives consumers a new option that offers much lower premiums. It also lets people who enroll in such plans keep them, thus reversing an Obama administration rule that canceled the plans after just 90 days and prohibited their renewal.

Affordable choices also extend to small businesses. An administration rule that allows small firms to band together to purchase health insurance and gain the same advantages as big corporations is reducing premiums for small businesses, sole proprietors, and independent contractors. Another proposed rule would let firms make tax-preferred contributions that their employees can use to shop for individual, portable health coverage.

Congress should write these rules into law to shield them from activist judges and reversals by future administrations.

4. Don’t fall for the siren song claiming that one-size-fits-all federal solutions will work.

It’s not just the left that wants to solve health care from Washington, D.C. Some on the right have also pushed efforts to solve our health care woes through federal action.

That approach is the opposite of what Americans want. A Washington-centered plan would undercut existing innovation and emerging improvements that have grown out of the regulatory relief provided by the president.

5. Don’t paper over Obamacare’s problems by throwing more federal taxpayer money at it.

Conservatives should also flee from the idea that we need a new federal program to spend new federal money on risk mitigation, such as reinsurance or high-risk pools. Such an effort failed last session in Congress, and recently, every Republican on the House Energy and Commerce Committee voted down an effort to create such a program, which would have cost $10 billion annually.

They were right to reject that proposal. It was absolutely unnecessary.

The reason is that the president’s regulatory relief has made it possible for every state to put in place new health insurance market conditions without creating new federal entitlement programs for insurance companies.

Seven states have taken advantage of this approach thus far. The result? Premiums have fallen between 7% and 30% in those states—without new federal spending—and the poor and sick have been protected.

This is a recipe for higher costs and lower value. This failed financing scheme must be swapped with a fundamentally consumer-centered approach that builds on the president’s existing work to give states more flexibility and resources to reinvigorate their private markets. It should ensure patients can choose the right coverage arrangement for them—and that health care decisions are made as close to them as possible, and as far away as possible from Washington, D.C.

6. Don’t rely on “silver bullet” solutions that claim to offer the cure to all our health care woes.

This approach bills itself as the solution, but it really plays small ball by emphasizing marginal changes rather than putting forth a unifying vision and a set of goals.

Some have emphasized policies like expanding health savings accounts or fixing surprise medical billing, which indeed should be part of the overall plan. But such policies must be tied to deeper, broader structural reforms in health care in order to meaningfully improve the care Americans get.

Trump is right to make health reform a central issue. The issue has not gone away for Americans, and politicians who want to lead must embrace the goals Americans have for their system.

The key is getting the execution right. With the right policies, tailored to the right goals, America will have a better health care system than ever before.