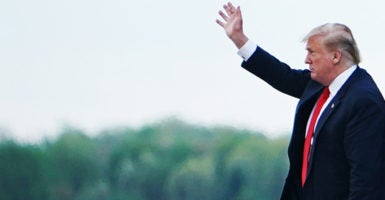 President Donald Trump waves as he steps off Air Force One upon arrival at Andrews Air Force Base in Maryland on April 21. Trump and his family returned to Washington after spending Easter weekend at his Mar-a-Lago resort in Florida. (Photo: Mandel Nigan/Getty Images)

The Mueller report, issued last week, concluded that neither Trump nor his campaign conspired with Russian operatives in meddling with the 2016 presidential campaign. However, it left a murkier picture on the question of obstruction of justice, painting an unflattering picture of the president trying to influence the probe, and his aides declining to do so.

That offered enough of a trail of bread crumbs for a House Democratic majority eager to investigate something to follow.

Here’s a look at four things to expect going forward after the Mueller report.

House Democrats conferred on Monday to determine their next course of action after the Mueller report.

House Judiciary Committee Chairman Jerrold Nadler, D-N.Y., said the questions of obstruction of justice could be impeachable “if proven.”

The Mueller report did open the door for Congress when it laid out 10 potential instances of obstruction, which included Trump’s firing of then-FBI Director James Comey and asking then-White House counsel Don McGahn to fire Mueller. Mueller was never fired.

The report specified it doesn’t “exonerate” Trump from obstruction.

The Mueller report said, “We concluded that Congress has the authority to prohibit a president’s corrupt use of his authority.”

Trump has, to no one’s surprise, pushed back.

Perhaps more importantly, from the perspective of the body that would actually conduct an impeachment process, House Majority Leader Steny Hoyer, D-Md., said, “Based on what we have seen to date, going forward on impeachment is not worthwhile at this point.”

Impeachment articles only require approval by a simple majority in the House, but two-thirds of the Senate are required to remove a sitting president.

Impeachment is a difficult case to make since the release of the Mueller report, said Hans von Spakovsky, a senior legal fellow at The Heritage Foundation.

“Impeachment is entirely a political process,” von Spakovsky told The Daily Signal. “It might be possible for Democrats to vote out articles of impeachment in the House, but not likely, considering there is no evidence the president broke the law.”

Even short of impeachment, Democrats are poised to move forward on various investigations, including aspects of the Mueller report, the president’s tax returns, and other matters.

Nadler said that Attorney General William Barr will come before the House Judiciary Committee in early May, and the committee hopes also to call Mueller to testify no later than May 23.

After an MSNBC reporter tried an ambush interview outside a church on Easter Sunday, Mueller said “no comment” about whether he would testify to Congress and other questions.

Trump’s personal lawyers are suing to prevent having to hand over the president’s tax returns and financial information to a House committee, contending the oversight committee is improperly using its subpoena power.

Democrats are speaking mostly to their core constituency on the left, said Craig Shirley, a presidential historian, who has written several books on Ronald Reagan.

“Some Democrats risk making fools of themselves if they continue to investigate Russia after the special counsel’s report,” Shirley told The Daily Signal. “They are so invested in that line that they are becoming fanatics.”

Justice Department Inspector General Michael Horowitz and the U.S. attorney for the district of Utah, John Huber, are conducting an investigation into several matters regarding officials at the Justice Department in the lead-up to the Trump-Russia probe.

Barr told a House subcommittee the Justice Department would be doing an additional review.

Rep. Devin Nunes, R-Calif., the ranking member of the House Intelligence Committee, made a criminal referral to the Justice Department.

Nunes told Fox News the potential crimes would include lying to and misleading Congress and leaking classified information.

The Mueller report cleared Carter Page, a former Trump campaign aide, of wrongdoing. The Justice Department had obtained a Foreign Intelligence Surveillance Act warrant to spy on him in October 2016.

One of Nunes’ referrals to the Justice Department deals with potential FISA abuse. The FISA request relied heavily on an unverified, salacious dossier prepared by former British spy Christopher Steele.

A Fusion GPS employee who worked with Steele is married to a Justice Department employee involved in the Russia matter—which raised further suspicions among Trump’s supporters.

Further, a since-fired FBI agent, Peter Strzok, involved in the investigations of both Clinton and Trump, exchanged anti-Trump messages with Lisa Page, then an FBI lawyer, with whom he was having an affair.

“Look at the FISA applications. Why was the FBI making payments to Christopher Steele and his dirty dossier, also paid for by Hillary Clinton and the DNC?” Conway told The Daily Signal last week during a press gaggle. “Glenn Simpson has taken the Fifth, with Fusion GPS. I’d like to know more about that.”

You know what Nellie Ohr and Bruce Ohr were doing. Her at Fusion GPS, him at the Department of Justice.

We have a right to know. We want transparency and accountability. We want to make sure democracy is honest; then, let’s investigate the investigators. How did we get here?

When the president says this should never happen to another president ever again, let’s see how we got here. How did it start?

Shirley contends that Trump should just move beyond the entire matter.

“If you win, don’t shoot down, shoot up,” Shirley said. “Let [the suspicion about present and former Justice Department officials] hang out there with the odor of guilt.”

4. Trump Administration Back on Track?

With the special counsel’s probe in the rearview mirror, the Trump administration has the opportunity to move forward with more of its policy agenda, congressional probes notwithstanding.

“It could be a good move if the administration tries to move forward on policy while the House is mired in so-called ‘investigations,’” von Spakovsky said.

Trump has called for moving forward with efforts to curb illegal immigration and further grow the economy, as well as for infrastructure projects and additional tax cuts.

Still, that depends on how the administration handles the matter, Shirley said.

“A special prosecutor sapped the energy from Trump’s presidency, just as they did from Ronald Reagan with Iran-Contra and Bill Clinton with Monica-gate,” he said. “Reagan and Clinton both recovered in polling and had black eyes, but no permanent damage.”

“He won. He should declare victory and move on,” Shirley said, adding, however, that it’s ultimately part of Trump’s nature.

“Deep down, he much more loves the sting of battle than legislative triumphs,” he said.