We Hear You: Absorbing the Loss of Notre Dame Cathedral 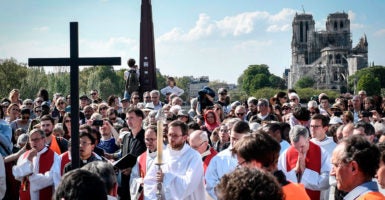 Editor’s note: The burning of Notre Dame Cathedral affected many in The Daily Signal’s audience, and featuring some of those responses seems appropriate this Easter. Don’t forget to write us at [email protected]—Ken McIntyre

Dear Daily Signal: More than 850 attacks on Christian artifacts or churches in France in 2017, as Kate McKenna notes in her commentary from Paris (“In Paris, Our Cathedral Lies in Ruins”). Hmm. Yeah, nothing suspicious here, right?

The fire starts right as they close Notre Dame for the day. It seems strategically placed so that the tall spire acted like one hell of a chimney, sucking masses of air into the inferno to make it out of control in mere minutes.

Firemen were slow to arrive on scene. They did manage to get a lot of stuff out or the fire spared it, including the organ. Much of the rest, being built into the structure, was lost.

No doubt the politicians are trying to keep the report dampened down, in case it was arson.—Silas Longshot

A highly suspicious fire in a nation—no, continent—increasingly apathetic and even hostile to Christianity.—Paul Johnson

I am overwhelmed by sadness. I pray this was an accident, and not terrorism. If it was terrorism, anger will supercede sadness.—Morris Steen

All Notre Dame was to the French was a reminder of their heritage, since they don’t give two bits about Christianity. France is the least Christian nation in Europe.—Terri Carson

Native populations in Europe are dying out and too lazy to do “real” work. It’s beneath them. So businesses hire foreign workers, including Muslims. Bye-bye, Europe.—Bob Stahl

Nice of Trump to take time out from his busy schedule to offer his off-the-cuff firefighting tips (“Trump and the Rest of the World Take to Twitter as Notre Dame Burns”).

There isn’t any job that he can’t do better than the professionals.—Alan Turner

Only a hateful, jealous bigot would make a comment against the president for his remarks on the loss of Notre Dame. Trump builds magnificent buildings, and he is profoundly affected by this loss.—Redigo Gubernatio

Unfortunately, in the society of mankind things always change, is my thought about Monica Burke’s commentary (“What Notre Dame Means to Me, a Lifelong Catholic”). What some revere, others want to destroy.

It’s sad, so very sad. A sickness of the brain, perhaps. No one can be so insane as that and yet claim to be numbered or named as human.

We often give Satan blame for these acts, but in reality these people literally give themselves to him.—Rex Whitmer

I recall standing on the plaza of Notre Dame in 2005, gazing up at the twin bell towers and speaking the words: “All my life, I have imagined being on this spot, recalling only having seen images of this magnificent place in the yellowed pages of history books. And here I am.”—Bob Robb

I’m very unhappy about the burning of Notre Dame, but I know it will be restored to its full glory, wonder, and majesty.

That keeps me from being completely crestfallen, and assures me of the thrill of seeing Notre Dame fully restored.—Mike Kevitt

I visited Notre Dame once, but it was around 5 on a cold January evening and as a result I could not really enjoy the darkened stain glass.

But the beauty of the cathedral was still awe inspiring. Thank you, Monica Burke, for putting into words what some of us are feeling.—Mark Zanghetti, Groton, Conn.

Although I never went to Paris on my cruises to the Mediterranean, the each cathedrals I did see was a wonder.

The cathedrals are beautiful and were handcrafted by artisans as part of worship to their God. This little Church of Christ boy looked upon them as houses of worship. Extraordinaire.

I wonder how many can read Monica Burke’s essay and not be so moved? Every cathedral I ever visited had the same effect on me, from Palma de Mallorca in Spain to Cambridge in the U.K.

This sense of wonder is what we are losing in our country, and we are worse off for it.—Curtis Conway

About Joshua Gill’s story on the challenge the Notre Dame fire posed for firefighters: I have a hard time believing that God left such precious things on this earth for people to fight over and claim superiority (“Why Couldn’t They Put Out the Fire at Notre Dame Cathedral?”). Things like the Arc of the Covenant, the chalice, the shroud, the crown of thorns, or any other thing touched by Christ.

Some have never been found and never will be; some are no more authentic than the man in the moon.

Man seems to be getting more and more aggressively arrogant in thinking he deserves to “own” such things so precious to God.

The Arc of the Covenant: Death awaited anyone who dared touch it, the Bible says. Would God leave it here for man to plead ownership to it?—Alaine de Breaux

“Flat and shallow,” the phrase Margaret Smith uses in her commentary on Notre Dame, describes most of our 18- to 30-year-olds of today (“Elegy for a Fallen Spire”). The past gives us insights into what successfully works, and also on what fails.

The so-called progressives seem to be aware of only what happened after they arose from slumber this morning.

It is a good thing the cathedral was in France. Had it been in the U.S., the progressives would have wanted it torn down and replaced with a drinking and eating establishment with some kind of a weird modern sculpture on top.—Rockne Hughes

The past. Recently, I have been decreasing the stuff I have accumulated over the years.

While I still have things obtained 50-plus years ago, very few are “necessary.” But almost all invoke memories, good and bad.

I have dumped the bad and kept some of the good because in 20 years, God willing, I will go through the stuff again. If only the progressives could understand that we are as much our past as we are our future.—A.B. Brooks

According to information published online by The Clover Chronicle, the Notre Dame fire “follows months of arson, vandalism, and desecration of French Catholic churches.”

This is not speculation, these are facts. So how is it that before the Notre Dame spire had finished burning, before any investigation had begun, that “officials” could declare that the fire was caused by accident?

Why are we not allowed to ask or even consider the obvious questions? Were any threats made against Notre Dame by connected groups or individuals, or were perpetrators of the recent acts of arson, vandalism, and desecration connected in any way?

Why can we not ask whether this was an attack on Western Christian civilization, or just an unfortunate accident, unrelated to the recent rash of attacks on Christian churches in France or elsewhere?

Why are so many public officials and members of the media so utterly devoid of curiosity? I for one, and one for all, would like to know the truth about what happened.—F.W. Hauck