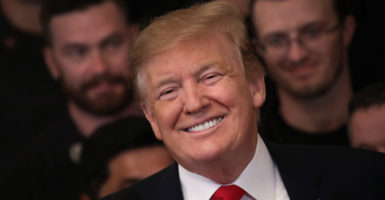 “None of the actions that were taken by the president could be considered obstruction of justice,” says The Heritage Foundation’s Hans von Spakovsky. (Photo: Drew Angerer/Getty Images)

The Heritage Foundation’s Hans von Spakovsky analyzes the redacted report about the findings from special counsel Robert Mueller, and why it’s time to investigate why President Donald Trump was ever suspected of collusion in the first place. Read the transcript, posted below, or listen to the interview in the podcast:

Kate Trinko: Joining us today to discuss the newly released Mueller Report is Heritage Foundation’s Hans von Spakovsky, a legal expert. Hans, have you looked at the report? What are your takeaways?

Hans von Spakovsky: Yes, I’ve been skimming through it all day, putting my speed-reading lessons to work.

von Spakovsky: Right. The key thing that I get out of it is that, remember when the Attorney General William Barr sent his letter to Congress in which he basically gave what the conclusions of the report were? One, there was no evidence of any collusion between the Trump campaign and the Russian government and two, there was no obstruction of justice.

There were a lot of claims by Democrats, including people like Jerry Nadler, who’s head of the Judiciary Committee, that, “Oh, well, we don’t believe you. We think you’re leaving things out.”

Well, reading through the report, it’s very clear that Barr was 100% accurate in his summary of it and that the two-volume report—half of which is the Russian collusion claim, the other half is the obstruction of justice claim.

No one can read that and come to any conclusion other than the whole Russian collusion claim was a hoax. There was just nothing to that at all. And none of the actions that were taken by the president could be considered obstruction of justice.

Now, it’s very clear when you read it, and you see they relate some of the internal conversations in meetings at the White House about this, it’s clear the president was very angry. But that is a sentiment that I think most people would share if they’ve been falsely accused of a crime and that’s exactly the situation here.

The key thing is that he took no official actions of any kind that could in any way actually be considered obstruction of justice.

Daniel Davis: Yeah. On that point, the report says that he gave orders to do things that were not obeyed, so Mueller says, quote, “The president’s efforts to influence the investigation were mostly unsuccessful, but that is largely because the persons who surrounded the person declined to carry out orders or accede to his requests.”

So it’s kind of a moot point then because it didn’t happen, but is that even a crime if he tried to get them to break the law but they didn’t?

von Spakovsky: No, I don’t think so, particularly because, and this is something that General Barr and others have talked about, is that it’s very clear when you read the report that he had no corrupt intent.

And what I mean by that is it’s one thing if you act because you’re innocent and you don’t believe the government should be investigating you because you haven’t committed a crime. That’s very different from having a corrupt intent to interfere with an investigation because, in fact, you did commit a crime and you want to cover it up.

Davis: So legally there’s a distinction there?

von Spakovsky: There is a distinction and they talk about the fact that the president’s anger over this makes it clear to General Barr that there was no corrupt intent with any of his hot talk, if I can call it that, over what Bob Mueller and others were doing.

And again, key point there, remember there were no restrictions placed on Bob Mueller. He had all the resources he needed, he had 19 lawyers, 40 FBI agents, and he did a very comprehensive, wide-ranging investigation.

I’ve already heard some folks claiming, “Well, he didn’t have everything he needed to do a complete investigation.” Again, that’s just not correct.

Trinko: The report says that President Trump did try to remove Mueller, or presumably a special council, but that people didn’t follow his orders … it didn’t happen. Is that telling or significant?

Davis: The report also said that Trump was asked a lot of written questions by Mueller and that Mueller was sort of unsatisfied with those answers.

I’ll just read from the report here. Mueller says, “The President stated on more than 30 occasions that he does not recall or remember or have an independent recollection of information called for by the questions. Other answers were incomplete or imprecise.”

It sounds like maybe he just got good legal advice.

von Spakovsky: It could be, and so what that Mueller wasn’t satisfied with that? That’s just Mueller’s claim. He hasn’t proved in a court of law that somehow those answers were untruthful. So again, I don’t pay much attention to accusations by a prosecutor who in the end concludes there’s not enough evidence for a prosecution.

Trinko: Liberals are calling for Mueller to testify before Congress—

Trinko: … in May. Is that a good idea? Is that something he should do? What do you think?

If they believe that Mueller’s going to come up with some kind of smoking gun that’s not in the report, I just don’t believe that. I think Mueller put everything he could into that report and they’re just not going to discover anything else.

Trinko: That’s a real problem for all the liberals with the Mueller tattoos and all that other stuff, there’s going to be no smoking gun.

Davis: But it seems like there’s enough in this report for both sides to really build a narrative. Trump clearly has the no collusion and no criminal charges, no indictment, but Democrats do have what seemed like the president potentially trying to undermine the investigation, although that didn’t happen. What do you think is the political fallout?

von Spakovsky: I actually don’t think, from the standpoint of an ordinary American, that there’s going to be much fallout because I think the ordinary American will look at what happened and say, “Boy, if I was falsely accused of a crime in my neighborhood or at my work, I would have been just as angry and just as frustrated as the president.” And I also probably would have wanted to tell off the prosecutor who was investigating me with no valid reason to do so.

Davis: In light of the fact that they found no collusion despite two years of efforts, a huge amount of manpower, and financial resources, frankly, applied this, they’re talking about looking into further the spying on the Trump campaign and how this whole thing began.

Do you think there needs to be much more of a investigation and why they even thought there was collusion to investigate in the first place?

von Spakovsky: The answer to that is yes, and the reason being that people should not forget that this did not start off as a regular law enforcement investigation, it started off as a counterintelligence operation. Because, in fact, what the FBI did is they went to the secret FISA Court. That’s the court set up by the Foreign Intelligence Surveillance Act.

That’s the court that our intelligence agencies and the FBI go to when they suspect there’s a foreign spy in the United States and they want to, for example, initiate secret electronic surveillance.

There are certain evidentiary standards you have to meet to justify that and never before in the history of the United States has a counterintelligence operation been opened, sanctioned by a court against a presidential campaign.

If there wasn’t, then people at the FBI and DOJ abused their law enforcement powers and not only do they need to be punished for that, but we need to be sure that never happens again.

Davis: As Sen. Lindsey Graham has pointed out, usually when those FISA investigations happen, it’s to protect the American entities and they will notify them and say, “Hey, these Russians or whoever are trying to spy on you,” but that never happens. So, it certainly allows for the possibility that there was some foul play.

von Spakovsky: Yeah. I have to say I heard the senator say that and I have to agree with him, that makes what happened highly suspicious to me.

If the FBI had knowledge that Russians were contacting the campaign, and as we now know in many efforts, there were many efforts where they were disguising themselves and trying to fool folks into not realizing they were Russian, why didn’t they go to the campaign and warn them about it?

Davis: Right. So how does this investigation into the FISA warrant happen? Does the attorney general now launch this or does Senator Graham have a special investigation?

von Spakovsky: Well, they both could happen at the same time because obviously the Senate and the House intelligence committees, and the judiciary committees, potentially, have jurisdiction over this.

But, in fact, if I was the attorney general, I would appoint a special inside task force. Not a special council, but a group of lawyers on the inside who can take a look at this and examine all the documents, interview the FBI agents and original DOJ lawyers involved, and find out did they actually have a real basis for opening up the investigation?

Trinko: Hans, thanks so much for making time and pulling away from the 400-page tome to talk to us today.

von Spakovsky: Sure, thanks for having me.