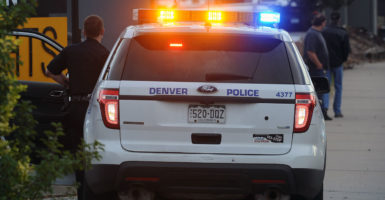 Colorado Gov. Jared Polis, a Democrat, this month signed into law a bill allowing a person to be temporarily disarmed if a court finds that he or she poses a significant risk of harm to self or others.

This makes Colorado the 15th state to enact such a law, known in Colorado as an extreme risk protection order and, colloquially, as a red flag law.

The state Legislature’s push for red flag legislation came after a man with a long history of untreated mental health problems shot and killed a 29-year-old sheriff’s deputy, Zach Parrish, who responded to 911 calls regarding a mental health crisis.

We long have noted that untreated serious mental illness plays a key role in suicides and acts of mass public violence, including those committed with firearms.

Red flag laws can be important in combating these types of firearm-related violence, but such laws must also respect due process protections, be limited in duration, and refrain from broadly undermining the Second Amendment rights of gun owners who aren’t a danger to themselves or others.

Every state’s red flag law is different, and some are unquestionably worrisome. But how do claims against Colorado’s law stack up against reality and reason?

Below, we address some of the common concerns raised about Colorado’s red flag law. In truth, the law—while not perfect—is well-crafted to intentionally avoid many of the problems normally seen in these types of measures.

No. The term “gun confiscation” rightly evokes fear among law-abiding gun owners that the government will impose broad-scale civilian disarmament like that seen in Australia and the United Kingdom. Laws that severely diminish the ability of citizens to keep and bear arms commonly used for lawful purposes are an affront to the Constitution.

But this law doesn’t seek to impose broad restrictions on all gun owners. Instead, it creates a legal process to temporarily disarm only those specific individuals who are determined by a court to meet objective criteria for dangerousness.

Under the statute, a law enforcement officer, family member, or household member (such as a roommate or domestic partner) may petition a court to hold a hearing over whether a person poses a significant risk of danger to self or others, and then temporarily revoke his or her right to purchase or possess firearms because of that risk.

A petitioner may request an emergency 14-day order if the risk for harm is “in the near future,” or a yearlong order if the risk is significant but not necessarily imminent. In either case, if the order expires without a new hearing being held and the order renewed, the individual’s firearms must be returned within three days and his or her name removed from any lists of disqualified persons, at no cost to the individual.

The same three-day mandate for the return of a person’s firearms applies to the expiration of yearlong orders, as well.

Moreover, the law explicitly states that this type of red flag order doesn’t count as a disqualifying mental health commitment under federal law. As soon as the order expires, the person is free to exercise his or her Second Amendment rights again without undergoing additional restoration processes.

In other words, this law doesn’t impose general prohibitions on all gun owners, but allows for temporary restraints on individuals who are genuinely a risk to personal or public safety, and only for the length of time that they pose a risk.

2. What About Due Process?

No person’s constitutional rights should be revoked, even temporarily, without first affording him or her meaningful due process protections. Colorado’s law generally ensures that the process for restricting firearm access via a red flag law has the same protections in place as its process for involuntarily committing someone to mental health treatment.

Once a petition is filed for a yearlong order, the court must hold a hearing within 14 days.

There, the defendant is entitled to legal counsel and the full array of due process protections for a civil commitment hearing—including the right to testify, to present evidence, and to cross-examine witnesses.

The burden of proof is on the petitioner to show by clear and convincing evidence that the individual is a significant risk of danger because of his access to firearms.

If the petition is for a 14-day emergency order, the hearing must be held within one court day, but it may be done without the defendant present.

The burden of proof is also lower, at a preponderance of the evidence. However, the petitioner must show that the risk of harm is in the “near future,” and must seek a full-fledged hearing for a yearlong order or else the emergency order expires after 14 days and the individual must have their firearms returned.

Orders don’t renew automatically, and any petitioner who requests a renewal must again show that the person is still a significant risk of danger.

If a petition is granted, the defendant may later request that the court remove the order before its expiration date and show that he is no longer a risk of danger.

It is common in all civil and criminal procedures for the person appealing a decision to bear the burden of proof.

In short, there is nothing out of the ordinary or fundamentally lacking in terms of due process prior to the temporary restriction of an individual’s rights under this law.

3. What About Actually Treating Them?

Some opponents of the law argue that it merely “kicks the can down the road” by taking away a person’s guns without actually treating them. While this is certainly a valid criticism of some red flag laws, Colorado’s law makes a commendable effort to integrate its red flag law with the existing mental health framework.

Under the law, whenever a temporary or yearlong order is granted, the court must also evaluate whether the individual meets the criteria for an emergency mental health assessment or for court-ordered mental health treatment.

Regardless of whether the individual meets that criteria, the law mandates that he be provided with resources regarding behavioral health treatment options, presumably as a means of facilitating his ability to later demonstrate a more stable and less violent frame of mind.

Law enforcement officers often respond to dangerous situations, and there is no practical difference between serving a red flag order, serving a normal arrest warrant, or taking someone into emergency protective custody when they’re in the middle of a mental health crisis.

If anything, the red flag law allows mentally unstable people to be disarmed before they actively engage in violent behavior directed toward themselves or others.

It’s already the case that untreated mental illness is major cause of concern for responding officers, with one 2012 analysis finding that at least half of all physical attacks on police officers are by mentally ill individuals—many of whom are untreated.

The goal of red flag laws, however, is to disarm these individuals and reroute them toward proper treatment before they ever reach a crisis stage. This ultimately makes cops and communities safer from potentially volatile situations, not less safe.

To be sure, reasonable people can debate whether certain aspects of Colorado’s new law should be altered as a matter of policy.

For example, should the order last for only six months instead of a year?

Should people who knowingly file baseless petitions in order to harass someone face additional criminal penalties?

Would it be a good idea to ensure that all records of a petition are expunged if the court doesn’t grant it, or that granted petitions are sealed after a certain period of time?

These are all useful questions, but they don’t mean the law is fundamentally flawed or constitutionally unsound. The truth is that Colorado lawmakers did a laudable job of taking into consideration and addressing very real concerns raised about past versions of this bill.

It’s true that anti-Second Amendment rhetoric is an ever-present force in recent years. But we needn’t condemn laws that, like Colorado’s, correctly focus on the underlying causes of firearm-related violence without broadly infringing on the rights of all gun owners.