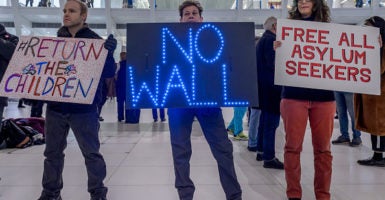 Protesters participate in an "Abolish ICE" rally Aug. 4, 2018, in the sanctuary city of Philadelphia to demand the halt of deportations of illegal immigrants and an end to family detentions. (Photo: Bastiaan Slabbers/NurPhoto/Getty Images)

Prominent Democrats say they oppose the idea, and even supporters say President Donald Trump could be trolling Democrats in a public relations move.

If Trump moves forward with the notion, it almost certainly would be litigated.

Here’s a look at key questions surrounding the proposal.

1. Where Would Illegal Immigrants Be Transported?

More than 170 cities and counties have some sort of sanctuary law prohibiting local law enforcement from assisting federal immigration authorities, and in some cases jurisdictions may even obstruct enforcement. This includes most large cities such as New York, Los Angeles, and Chicago.

That’s according to data from the Center for Immigration Studies, a think tank favoring strict immigration policies, which has a map of sanctuary cities on its website. Local sanctuary jurisdictions span 26 states.

California, home of House Speaker Nancy Pelosi, a Democrat who is highly critical of Trump, is a sanctuary state.

Pelosi spokeswoman Ashley Etienne said in a statement Friday: “Using human beings—including little children—as pawns in their warped game to perpetuate fear and demonize immigrants is despicable, and in some cases, criminal.”

It’s not clear exactly how the Department of Homeland Security, which oversees Customs and Border Protection as well as Immigration and Customs Enforcement, would determine which sanctuary cities or counties would receive illegal immigrants.

The entire matter is still under review, said Larry Kudlow, assistant to the president for economic policy and director of the National Economic Council.

“I don’t know that we will be transporting. I don’t know that decision has been made. The president has talked about it. The decision is going to be up to him,” Kudlow told The Daily Signal during a press gaggle Tuesday at the White House.

“We are searching for border security, that is so essential. We think a lot of changes in the [immigration] laws are going to be necessary,” Kudlow said.  “At some point, in due course, he will make some determinations on that. We have not made decisions on a lot of these things.”

2.  Why Would Trump Want to Release Illegal Immigrants Anywhere in U.S.?

Trump doesn’t want to release illegal border crossers, but Immigration and Customs Enforcement lacks detention space to hold them and there is a shortage of immigration judges to adjudicate deportation hearings and asylum claims.

Under federal law, if an illegal border crosser claims asylum, authorities cannot send him or her back into Mexico. The matter must be adjudicated through a hearing.

Those who claim asylum have to submit to a “credible fear interview,” while others face a deportation hearing before an immigration judge.

It can take eight years before such a hearing is held, and many illegal immigrants don’t show up for a hearing or interview. These circumstances lead to the de facto policy of  “catch and release”—with the release being inside the country.

“Ideally, we shouldn’t be releasing illegal immigrants into the country at all, but as long as there is a shortage of judges and Congress won’t approve additional detention space for ICE, the government does,” Ira Mehlman, spokesman for the Federation for American Immigration Reform, told The Daily Signal.

Mehlman added: “This puts sanctuary cities to the test. Do you really want them, or are you just grandstanding?”

The New York Times reported five days ago that the idea got some pushback inside Immigration and Customs Enforcement.

“ICE officials balked at the notion of moving migrants to detention facilities in different areas,” the newspaper reported, “insisting that Congress only authorizes the agency to deport immigrants, not relocate them internally, according to DHS officials.”

However, Trump is bringing in new leadership for the Department of Homeland Security after forcing out Secretary Kirstjen Nielsen on April 7.

Since the Times and others reported on the legal questions, Brandon Judd, president of the National Border Patrol Council, a labor union, and former ICE acting Director Thomas Homan both have said the move would be legal.

“I don’t see anything in the law that would prevent the president from doing this,” he said.

But Democratic lawmakers contend the move would be illegal because funds were not authorized for this purpose.

“If the administration wants to send a message to Democrats, let us send this message to the president: If your immigration policies are not fixing the problem but only cause chaos and focus on keeping people out, they will always fail,” House Homeland Security Chairman Bennie Thompson, D-Miss., said in a prepared statement. “Playing politics with the country’s homeland security has been a mainstay of the Trump administration since day one. The American people want it to end.”

“You didn’t hear them citing any particular statute or provision of federal immigration law, so I think they are just making that assertion really without any support,” he said.

Transporting illegal immigrants within the interior of the U.S. would not be a new policy, von Spakovsky added.

“Look, keep in mind, over the past many years, for example when unescorted minors have been caught at the border, the Department of Homeland Security has been transporting them all over the country to join other members of their families, guardians, and things like that,” he said. “This has been happening for years.”

If the appropriations process is the only legal question, that likely could be addressed, said Art Arthur, a former federal immigration judge who was general counsel for the Immigration and Naturalization Service, now ICE.

“Illegal immigrants that are released are formally put on parole,” Arthur told The Daily Signal.

Arthur, now a resident fellow for law and policy at the Center for Immigration Studies, said the law allows an immigration judge or the secretary of homeland security to place conditions on that parole.

“In this case, they could be required to go to certain locations as a condition of parole, at no cost to the government,” he said.

It would be at no cost because a judge could order an immigrant—as a condition of parole—to live in a certain location or risk being arrested.

With regard to local costs that follow relocation, sanctuary cities and counties already are magnets for illegal immigrants. The added costs of being a home to illegal immigrants falls disproportionately on a few communities near the border as well as inner-city Los Angeles and parts of Florida and North Carolina, Arthur said.

Transporting wouldn’t deter illegal border crossers, but it might apportion the problem more equally among jurisdictions.

Mehlman said the policy likely wouldn’t have to be specifically budgeted by Congress because the government already transports illegal immigrants for various reasons.

Besides not solving any problems with illegal border crossings, the policy being considered by Trump could create new problems, Arthur warned.

“You have to consider the census,” Arthur said. “Increasing the populations of sanctuary jurisdictions is just going to give them more political power, not less.”

Such a policy also would move illegal immigrants to locations that make it harder for the federal government to track them, the former immigration judge said.

“This puts ICE in a position to try to find people in sanctuary communities that already make it difficult for them,” he said.

Lastly, Arthur said, even if the legal issues regarding authorizing funds are fully addressed, “the costs of busing people apprehended at the border for eight hours into San Francisco has real-world consequences.”