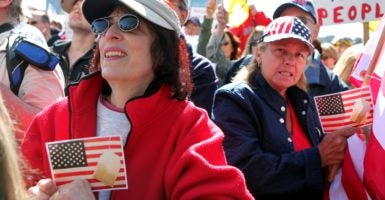 Americans across the country are preparing to organize 300 or more rallies against socialism on Monday, mobilized and assisted by a major tea party group.

April 15 not only is Tax Day, when income tax returns are due, but also marks the 10th anniversary of a series of protests against high taxes and an economic stimulus package pushed by the fledgling Obama administration.

This year’s rallies are planned under the name “Stop Socialism, Choose Freedom” and are supported by the group Tea Party Patriots.

The taxpayer rallies in 2009 were born of resistance to the Temporary Assistance Relief Program, a government bailout of financial institutions passed by a Democrat-controlled Congress in 2008. Signed into law by President George W. Bush, a Republican, it was designed to counter the Great Recession that began in December 2007.

Ever since, the tea party movement has stood for economic and personal freedom and a debt-free future, Jenny Beth Martin, co-founder and national coordinator of Tea Party Patriots, told The Daily SIgnal.

“In 2009, we saw Obamacare move through Congress, watched as our government took over health care and moved toward a more socialized health care system,” Martin said.

>>> Related: 10 Years After First Rallies, What’s the Legacy of the Tea Party?

“What we’re seeing right now from many liberals in Congress is a call for socialized, single-payer health care,” Martin said.

Their proposal, embraced by many Democrats, “would remove economic freedom, increase our debt, and infringe on personal freedom,” she said, decrying what she called “more and more calls for socialist programs and championing of democratic socialism.”

In conjunction with the 10th anniversary of the first Tax Day Tea Party, Martin said the “Stop Socialism, Choose Freedom” rallies will focus on the difference between socialism’s past in America and the path of freedom.

With over 300 rallies planned, the goal of Tea Party Patriots is to reach 500 rallies nationwide.

“So far, we’ve had nearly 400 people who have signed up to host rallies,” Martin said. “Now, dozens of these people have never hosted a rally before, so we are helping them get started and get organized, and we still have to get all those details nailed down to actually pull off all the rallies.”

Martin said some rallies will be formal, with speakers lined up, and others will be simpler, smaller, sign-waving events held by friends who want to show their communities that they choose freedom for America.

“I expect a decent-sized crowd like in Gilbert, Arizona, outside of Phoenix; [in] Sugar Land, Texas, outside of Houston; and in Atlanta, Georgia,” Martin said. “In 2009, the largest rally that we had on Tax Day was in Atlanta, where the crowd size exceeded 20,000 people.”

The Tea Party Patriots leader said those interested in holding or attending a rally can find information and resources at the group’s website.