A Glimpse of What the Green New Deal Would Cost Taxpayers 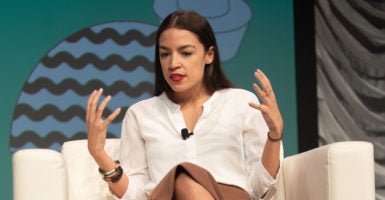 Rep. Alexandria Ocasio-Cortez, a sponsor of the Green New Deal, is interviewed March 9 during the 2019 SXSW Conference and Festival at Austin Convention Center in Austin, Texas. (Photo: Jim Bennett/WireImage/Getty Images)

Implementing the Green New Deal resolution would place significant though hard-to-quantify costs on Americans, according to a preliminary analysis by The Heritage Foundation that hints at the total burden.

Granted, generating a cost estimate for a plan that is nebulously defined and lacks specificity is a challenge, especially when technologies to achieve those goals simply do not exist.

Is the model supposed to assume that all-electric 18-wheelers become the new norm, for example?

In other instances, the Green New Deal resolution, which is nonbinding, adds vague language such as reducing greenhouse gas emissions “as much as technologically feasible.”

But that doesn’t help much when modeling costs, either.

It’s technically feasible to ground airplanes, close factories, and shut down oil pipelines. But that doesn’t mean an energy model can account for such a fantastical green dream.

Instead, to provide a broad estimate of just a fraction of what the Green New Deal would cost, Heritage analysts modeled implementation of a $54 carbon tax, phased in by 2021.

Although the Green New Deal as proposed by Rep. Alexandria Ocasio-Cortez, D-N.Y., and Sen. Ed Markey, D-Mass., does not explicitly call for a carbon tax, Heritage’s analysis demonstrates the economic sacrifices all Americans would make to achieve just a fraction of the emission reductions desired.

The changes modeled in Heritage’s report are projected to reduce greenhouse gases by slightly less than 30 percent by the middle of the century, merely a small portion of the emissions reductions envisioned in the Green New Deal resolution.

The Green New Deal aims to achieve 40 percent to 60 percent global reductions in man-made greenhouse gases from 2010 levels by 2030, and net zero emissions by 2050.

The plan calls for eliminating greenhouse gas emissions from transportation, manufacturing, agricultural, and other industrial sectors to the extent it is technologically feasible.

To provide a glimpse into the broad costs on these industries, Heritage analysts implement an economy-wide carbon tax. In future analyses, we aim to implement higher carbon taxes to realize greater emissions reductions to the extent that the model recognizes such changes as technologically feasible.

As mentioned in a FAQ sheet attributed to Ocasio-Cortez’s office, “a carbon tax would be a tiny part of a Green New Deal.” Nevertheless, modeling a “tiny part” and showing the high costs of that “tiny part” demonstrate just how economically devastating the Green New Deal would be.

Our tax begins in 2020 at $27 per ton of carbon dioxide emissions, increases to $54 the following year, and subsequently increases annually by 2.5 percent. In our simulations, we rebate the revenue collected from the tax back to consumers.

In addition, we included carbon-based regulations on the manufacturing industry as well as mandates requiring the country to use significantly more renewable forms of energy than current projections. To quantify the economic impact of the Green New Deal, we used the Heritage Energy Model, a derivative of the Energy Information Administration’s National Energy Modeling System.

According to the Heritage Energy Model, as a result of the taxes and carbon-based regulations, by 2040 one can expect:

Unquestionably, these projections from the Heritage Energy Model significantly underestimate the costs of the Green New Deal’s energy components. As Ocasio-Cortez’s Frequently Asked Questions sheet notes, the carbon tax is only one of many policy tools Green New Deal advocates hope to implement.

In the same FAQ sheet, Ocasio-Cortez’s office argues that massive amounts of spending are necessary—and “government is best placed to be the prime driver.” In other words, the resolution’s co-sponsors expect the taxpayers to pay for a massive, economy-wide transition.

If policymakers spent, taxed, and regulated to achieve greenhouse gas-neutral energy, agricultural, and industrial sectors, the costs would be several orders of magnitude higher than those projected in the Heritage report.

Proponents of a carbon tax and the Green New Deal argue that these policies are a form of insurance against a changing climate. The cost of inaction, they purport, is much greater than any policies that drive energy prices higher.

However, the reality is these policies do not actually provide any “climate insurance.” No matter where one stands on the urgency to combat climate change, the Green New Deal policies would be ineffective in abating temperature increases and slowing the rise of sea levels. In fact, the U.S. could cut its carbon dioxide emissions by 100 percent and it would not make a difference in global warming.

According to the Model for the Assessment of Greenhouse Gas Induced Climate Change, using a climate sensitivity of 4.5 degrees Celsius (the warming effect of a doubling of carbon dioxide emissions and an estimate exceeding recent research on the topic), the world would be less than 0.2 degree Celsius cooler by 2100. The rise of sea levels would be reduced by less than 2 centimeters.

The Green New Deal is not just an energy and climate policy: It is a plan to fundamentally transform the economy.

A Green New Deal as outlined by Ocasio-Cortez would be fiscally and economically catastrophic for American families and businesses—all for no meaningful climate benefit.

The plan is far from new and would introduce a completely new level of cronyism and corporate welfare that would harm Americans all across the country.