Maduro’s Missiles Pose a Terrorist Threat to the US, Experts Say 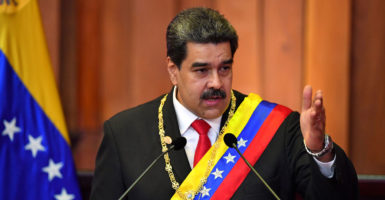 KYIV, Ukraine—If the regime of Venezuelan dictator Nicolas Maduro falls, experts warn the country’s arsenal of Russian-made, SA-24 surface-to-air missiles might end up in the hands of terrorists or drug cartels, posing a threat to U.S. civil aviation.

Man-portable air defense systems, or “MANPADS,” are a particularly chilling threat in the hands of a terrorist organization, since, by design, the weapons are transportable by a single person, making them much easier to smuggle than larger weapons systems.

For that reason, U.S. security officials have long warned of MANPADS proliferating from the battlefields of Syria, Libya, Iraq, and Yemen. Yet, unlike those distant warzones, weapons from Venezuela could arrive in the U.S. by land.

“There are existing narco networks and smuggling routes, both overland and maritime, to potentially bring these MANPADS into the U.S. It’s a serious problem that we have no good answer for right now,” said Chris Harmer, a retired U.S. Navy commander and former congressional staffer.

In 1999, under the watch of Venezuela’s former president, Hugo Chavez, the country began purchasing a wide range of military hardware from Russia. According to a Reuters report, those weapons purchases included an order for 5,000 Russian-made, Igla-S MANPADS—known as the SA-24 in U.S. military circles.

Today, with Maduro’s grip on power under pressure from the U.S.-backed interim president, Juan Guaido, experts have sounded the alarm about the prospect of black market profiteers pilfering the country’s military arsenals in the wake of a civil war or countrywide collapse into anarchy.

“The widespread proliferation of Venezuela’s MANPADS would be hugely worrisome, not only for the U.S. but for the entire region,” said Matt Schroeder, senior researcher for Small Arms Survey, a Swiss think tank.

“Venezuela’s MANPADS inventories are comparable in scale to those of Libya’s, but, unlike the SA-7s in Libya, which were technologically primitive and 30 to 40 years old, Venezuela’s Igla-S MANPADS are recent-generation and recently produced,” Schroeder said. “The loss of government control over these systems would be a huge blow to aviation security.”

Also, the Maduro government has well-established ties to Hezbollah, as well as drug cartels in Central and South America with well-honed smuggling routes into the U.S., underscoring how the proliferation of Venezuela’s advanced surface-to-air missiles would pose a unique threat to U.S. national security, experts say.

“Hezbollah has established a sophisticated and far-reaching operation in Central and South America,” Harmer said. “They provide significant money laundering support to drug cartels in a mutually beneficial arrangement. I am certain Hezbollah is extremely interested in obtaining MANPADS out of the Maduro stockpile.”

In a 2017 briefing before Congress, then-CIA Director Mike Pompeo said it was a “real threat” that weapons smuggled out of Venezuela could end up in the hands of a terrorist organization or a drug cartel in Mexico.

“There are plenty of weapons running around in Venezuela. And this risk is incredibly real and serious and [a threat to] South America and Central America, in addition to just in Venezuela,” Pompeo said at the 2017 Capitol Hill briefing.

As the situation in Venezuela deteriorates, the U.S. has floated the possibility of a military intervention to secure Guaido’s leadership.

“There are a lot of reasons why U.S. military action in Venezuela would be very complicated and dangerous. At the top of the list is the Maduro regime’s stockpile of MANPADS,” Harmer said. “The SA-24 is a very capable system and any potential U.S. military operation would have to take that into account.”

With a range and velocity superior to that of the vaunted U.S. Stinger missile, the SA-24 would pose a serious threat to U.S. military forces should they intervene in Venezuela. For that reason, taking out Venezuela’s SA-24 arsenal would likely be a priority for U.S. forces, experts say.

“The U.S. would need and should have a very good, aggressive weapons removal and abatement plan for Venezuela if we are talking about assistance, military action, or a post-conflict zone in addition to defeating any [MANPADS] if they were employed against us,” said Thomas Moore, a former senior professional staff member for the Senate Committee on Foreign Relations.

“We would make it a high priority to secure, remove, or eliminate MANPADS,” Moore told The Daily Signal in an email.

Harmer agreed that, in the event of an intervention in Venezuela, U.S. forces would prioritize neutralizing the surface-to-air missile threat. He added, however, that confiscating Venezuela’s SA-24 arsenal would be a bridge too far for U.S. forces.

The deployment of Russian troops to Venezuela last week heightened tensions and underscored how Venezuela’s crisis is now at the nexus of the competing geopolitical interests of Washington and Moscow. This development comes as U.S. President Donald Trump has threatened to close the U.S.-Mexico border, citing a national security emergency due to illegal border crossings.

For his part, Moore doubted that Russia would be a helpful partner in keeping Venezuela’s SA-24 arsenal off the black market.

“I cannot really say Russia’s first concern in Venezuela after Maduro would be taking back any military assistance they have provided,” Moore said.

MANPADS have been a threat to civil aviation since the first attempted attack against an airliner in 1973, according to an Organization for Security and Cooperation in Europe report.

More than 40 civilian aircraft have been hit by MANPADS since the 1970s, the State Department reported in a 2017 fact sheet.

In 2002, terrorists fired shoulder-launched missiles at an Israeli Arkia Airlines passenger plane as it was taking off from Mombasa, Kenya. The two missiles missed their target and the plane ultimately landed safely in Tel Aviv.

The failed attack prompted Israel to look into equipping its aircraft with defensive technologies. One such technology is a laser, called the Elbit C-Music anti-missile system, which can be fitted to a commercial jetliner and is capable of disabling a surface-to-air missile’s guidance system.

El Al Airlines, Israel’s flagship carrier, installed such a laser on one of its 737 jetliners in June 2013. The effectiveness of defensive lasers like the Elbit C-Music is unproven, however, and with a price tag of $1.2 million, such systems are impractical to install on every commercial aircraft.

U.S. military aircraft are typically equipped with a suite of missile detection and countermeasure systems, and military pilots are trained to evade surface-to-air missiles and small arms fire by performing complex takeoff and landing approach patterns that make it more difficult to be targeted.

If landing at night, pilots turn off external lights and land at blacked-out airfields using night-vision goggles. Meanwhile, security teams and drones patrol the airfield’s periphery on the lookout for any suspicious activity.

Airborne countermeasures include flares, which divert heat-seeking missiles, and chaff—clouds of metal ribbons, which, when dispersed behind an aircraft, conceal its radar signature and provide an alternative target for a radar-guided missile.

Those countermeasures are uniquely tailored for the specific threats present in the areas within which military aircraft operate. Prior to missions, intelligence staff brief military pilots on the local missile threat, recommending what precautionary measures should be taken.

Altogether, these measures are impractical for civilian airliners, say several U.S. military combat pilots and aviation experts familiar with surface-to-air missile threats and defensive measures. Moreover, there is no one countermeasure that could be installed across the board for all civilian airliners that would effectively defend against all threats.

In July 2014, a Russian Buk surface-to-air missile shot down Malaysia Airlines Flight 17 while flying over eastern Ukraine, killing all 298 souls on board. The incident highlighted the threat to civilian airliners flying over conflict zones.

However, missiles like the Buk are complicated, massive weapons, impractical for terrorists to covertly acquire and effectively use.

MANPADS, on the other hand, are designed to strike targets flying at lower altitudes. The shoulder-fired missiles are, consequently, a greater threat to aircraft on takeoff or landing. Their smaller size also makes them much easier to smuggle.

The possibility of encountering a surface-to-air missile similar to the one that brought down MH17 has been virtually nonexistent for U.S. military warplanes flying missions over Iraq and Afghanistan. The threat in those warzones is mostly from small arms fire and MANPADS.

Thus, keeping MANPADS out of the hands of terrorist groups was a top priority for U.S. forces in Iraq and Afghanistan, providing a template for the kinds of operations that may soon be needed in Venezuela.

“The U.S. got plenty of experience defeating and mitigating the threat from Soviet and Russian [surface-to-air missiles] and MANPADs in Iraq and Afghanistan,” Moore said. “That included efforts by [the State Department’s] Weapons Removal and Abatement Office, and the [Defense Department’s Defense Threat Reduction Agency]. I cannot really be too specific about that, but it’s most certainly a whole-of-government approach we take to these weapons.”

Juan Guiado’s title has been updated in this article.