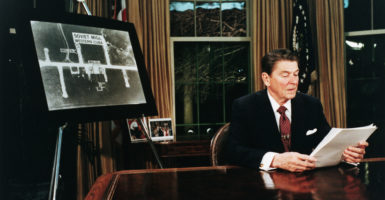 The military conducted a successful test of the Ground-Based Midcourse Defense system against the most complex simulated threat to date.

What if free people could live secure in the knowledge that their security did not rest upon the threat of instant U.S. retaliation to deter a Soviet attack, that we could intercept and destroy strategic ballistic missiles before they reached our own soil or that of our allies?

The test March 25 validates the wisdom of his vision born from the Strategic Defense Initiative program. The Ground-Based Midcourse Defense system is currently the only system protecting the United States against long-range ballistic missiles, such as those that North Korea periodically threatens to use against us.

It never would have been possible without people of vision and the courage to dream big.

The first interceptor successfully destroyed the target, while the second intercepted the second-most lethal object in the threat cloud since the primary target was already destroyed—exactly the result that the Pentagon hoped for.

The test involved a first-ever Ground-Based Midcourse Defense salvo-engagement and utilized space, sea, and ground-based radar data. The test is welcome good news for a program that has had difficulties in prior years with performance.

While the success of this test is remarkable, too much attention placed on successful intercepts is not particularly conducive to the development of the program.

After all, the best metric for a test success is whether we’ve learned as much as we could from it. That’s how the United States gets the best buck for its testing money.

Sometimes, we learn more from a failure than from a success.

It is better to design missile defense tests in a way that pushes the system’s envelope, even if it means a higher likelihood of a failure—in this case, a non-intercept. It is better that a system fails during a test, rather than in a real-life situation when it’s too late to improve upon it.

Such philosophy is not new in the U.S. programmatic approach, but over time, we seem to have forgotten the lesson—namely, that success depends on “bleeding-edge” experimentation.

Twelve of the 17 missiles failed to meet their test objectives in the first year when the missile was tested. Yet, the leaders persevered, and the missile was successfully deployed as one of the pillars of America’s nuclear deterrence well into the mid-1990s.

Today, programs often take decades to complete and endure criticism starting from the first test. That’s a far cry from how we achieved such success in the past.

As Air Force Gen. John Hyten, commander of the U.S. Strategic Command, aptly summarized the situation: “I don’t know how it happened, but this country lost the ability to go fast.”

In the era of great power competition, the consequences of not keeping up with U.S. adversaries would be grave.

With this successful Ground-Based Midcourse Defense test against an intercontinental ballistic missile target, the United States is demonstrating it can make missile defense happen when it sets its mind to it.