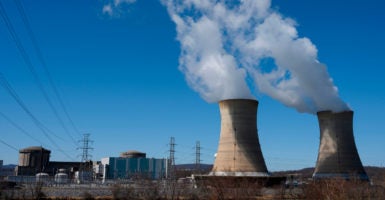 Many Americans by then had already seen Jane Fonda’s “The China Syndrome,” a nuclear disaster film that debuted three weeks earlier. Time magazine would memorialize the Three Mile Island disaster with a cover article, “Nuclear Nightmare,” which went on to detail “the worst accident in the history of U.S. nuclear power production.”

If that’s our worst nuclear accident, March 28 should be a day of celebration.

No one died in the accident. There were no radiological health issues to the public. None of the milk used for Hershey’s chocolate bars or anything else was contaminated. The event actually demonstrated that the U.S. nuclear industry could control an accident safely, and it revealed areas where improvements were needed.

Forty years later, a nuclear reactor still remains at Three Mile Island, generating enough power to supply 800,000 homes and employ hundreds of people. But it’s scheduled for closure later this year—not because of technical failures salacious enough for “China Syndrome the Sequel,” but because it can’t compete economically in today’s energy market.

The reason Three Mile Island is seared into the American imagination has a lot more to do with political and journalistic failure than the technological failures that occurred on March 28, 1979.

In the hours and days after the alarm was sounded, miscommunication ensued between state and federal officials. Conflicting calls for evacuation fed fear and distrust among the public. Two days after the accident, Gov. Dick Thornburgh advised people to shelter in pace and eventually recommended pregnant women and children evacuate. Fanned by media drama, people feared being exposed to deadly radiation.

Looking back, the risks were hardly severe. Actual radiation exposure for the 2 million people nearest to Three Mile Island totaled a dose of about 1 millirem above what Americans are exposed to naturally.

For context, a single dental x-ray exposes a patient to 1.5 millirem. Residents in cities like Denver receive 90 millirem simply by virtue of living in a high-altitude, rocky setting. There was nothing to be afraid of. The evacuation at Three Mile Island was entirely unnecessary and caused unnecessary anxiety.

Pennsylvanians relied on their state and federal government to help them make good decisions for themselves and their families, and were let down. Today’s politicians must not repeat the same mistakes.

The public looks to the federal government as a source of reliable, accurate information. When government exaggerates the risks of radiation exposure, it is not protecting the public. Some might say “Better safe than sorry,” but it’s far better to be accurate—especially when it comes to radiation.

The legacy of Three Mile Island makes that responsibility of political leaders an uphill battle, though. As Michael Shellenberger poignantly wrote after witnessing the removal of thousands of tons of “contaminated” topsoil during a visit to Fukushima, Japan: “Every scientist and radiation expert in the world who comes here says the same thing. We know we don’t need to reduce radiation levels for public health. We’re doing it because the people want us to.”

The reason education is so important is not to dismiss or downplay harms or to cover for the nuclear industry, but so that decision-makers can be better prepared to lead based on actual risks rather than emotional concerns, which can have their own consequences.

That starts with politicians and media educating themselves so they don’t make the same mistakes their predecessors did 40 years ago, and which were repeated at Fukushima in 2011. A good place to start is to watch the “Powering America” documentary.

Fear may make for good movies, but knowledge is power.