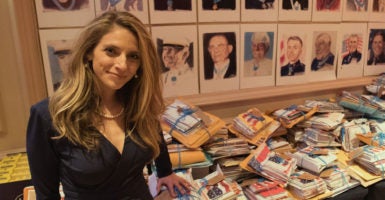 Janine Stange with some of the letters and packages for Medal of Honor recipients from Americans who responded to her call. (Photo courtesy Janine Stange)

“The outpouring was incredible,” Stange, known as “National Anthem Girl,” said in a press release sent to The Daily Signal.

Stange, the first person to sing the national anthem in all 50 states, said she gathered a total of 12,000 personalized letters for the Medal of Honor recipients in her third annual effort.

She delivered the letters over the weekend to 28 of the 72 living recipients at a dinner in their honor in Arlington, Virginia. Those who could not attend were to receive their letters through the mail.

“It’s really moving,” Medal of Honor recipient Thomas Norris, 75, said. “I’m in awe because you just don’t expect this kind of response from people you don’t know. I’m very honored that people took the time. They have my heartfelt thanks.”

The Medal of Honor, presented by the president, is the nation’s most prestigious military decoration. It goes to those in the armed forces whose service in action against the enemy displays “conspicuous gallantry and intrepidity at the risk of life above and beyond the call of duty.”

In a letter to one decorated veteran, a young student wrote:

I know you say you don’t consider yourself a hero, but you found yourself in a situation where you had a choice to act selfishly or selflessly, and you chose the latter. I want you to know that I want to be the same way.

“These guys love getting the letters,” Stange said. “You can see it in their faces when they’re given their bundle. But the real value in this project is giving citizens the chance to research their exploits and sacrifices, and express gratitude to them and their fellow veterans.”

National Medal of Honor Day is celebrated officially every March 25.

Those interested in participating in next year’s “mail call” may find details here.

Mykala Steadman is a member of the Young Leaders Program at The Heritage Foundation.