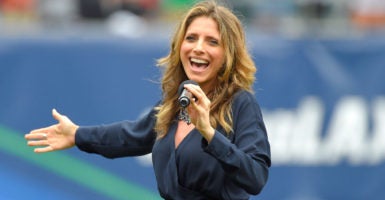 Performer Janine Stange, who first drew the country’s attention in 2014 for singing the national anthem in all 50 states, is asking citizens for a third year to write letters to the living Medal of Honor recipients. (Photo: Rich Barnes/Getty Images)

A patriotic American singer and motivational speaker is looking to rally special attention to the 72 living recipients of the most prestigious award for members of our nation’s armed services.

Every year on March 25, National Medal of Honor Day is observed in honor of the heroic Medal of Honor recipients who have distinguished themselves “conspicuously by gallantry and intrepidity” at the risk of losing their lives “above and beyond the call of duty while engaged in an action against an enemy of the United States.”

Performer Janine Stange, who first drew the country’s attention in 2014 for singing the national anthem in all 50 states, is asking citizens for a third year to write letters to the living Medal of Honor recipients. These letters are delivered, as Stange puts it, “mail call style” at an annual gathering in Washington, D.C.

Stange said in an interview with The Daily Signal that what started as a kind project has turned her living room into a mail room, full of thank you letters from citizens nationwide.

“They love our country,” Stange told The Daily Signal about the recipients. “They were there for something bigger than themselves. It wasn’t a selfish act at all. And to meet them today, years after these things that they’ve done, they’re still the nicest people ever—the most approachable, kind, and total role models.”

Stange will be delivering letters to Medal of Honor recipients on March 25.

“Let’s thank our American heroes … You’re not too young, and you’re not too old, to make a difference,” Stange said. “This is just a simple way to say thank you. And I can tell you from witnessing the looks on all their faces that it means the world to them.”

If you would like to participate, please select one of the living recipients to write a letter to. Letters should be addressed by March 15 to:

Groups, schools, companies, and teams can be assigned a recipient by visiting Stange’s website dedicated to the initiative at www.janinestange.com/moh.

Mykala Steadman is a member of the Young Leaders Program at The Heritage Foundation.