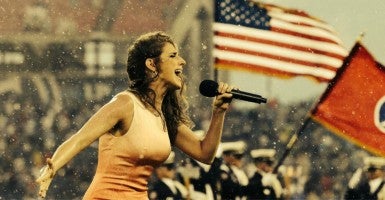 Performer Janine Stange has made history for a second time.

Stange, also known as the “National Anthem Girl,” first made headlines in August 2014 when she became the first person to sing “The Star-Spangled Banner” in all 50 states.

This past weekend, the Los Angeles resident sang the national anthem 24 times in 24 hours.

The performances were held in conjunction with a tournament hosted by Shootout for Soldiers, an organization that hosts 24-hour-long lacrosse events to raise money for wounded American military members. Throughout those 24 hours, 24 lacrosse teams from the region played hourly games. Stange kicked off each game with a rendition of the anthem.

Cpl Oneill, Ryan – USMC holding our flag. Each time I sing one of our nation’s finest wi hold the flag.

The charity, which was founded by a group of Maryland high school students in 2012, has raised close to one million dollars since its inception. This weekend the group brought in $23,975.

“I’m honored and humbled to do it,” Stange told The Daily Signal.

The event began Friday evening in Dana Point, California, and continued through the night. Stange’s last notes rang out on Saturday night, August 1st, the same day Francis Scott Key wrote the lyrics to the poem-turned-anthem in 1814.

“I’m excited that this is an event that is fully dedicated to benefiting our soldiers,” Stange said. “It’s because [of those soldiers that] we are free to do these things.”

An American flag was held by a veteran or an active military member each time Stange sang. Stange plans to auction off the flag on eBay, donating all proceeds of the sale to the Gary Sinise Foundation, an organization benefiting wounded military members.

Stange has 49 additional flags she plans to auction over time, donating the funds to various organizations that “embody the meaning of the national anthem.”

“As a country, when we sing [the anthem] for 90 seconds, no matter who we voted for or what team we want to win, we are united,” Stange said. “We are one. That’s what we need now more than ever.”

Since completing her two-year stint singing the anthem in all 50 states last summer, Stange has continued to travel the country, singing and speaking at events.

“I never thought in a million years I’d be doing this, but I see a need for it,” she said.

Stange is currently in the process of writing a book for young girls about her experiences traveling the country.

“This song is not my song, it’s our song,” Stange said. “Especially with the elections and all the turmoil in the world in general…I will keep doing this to do my part.”

Stange, who started out her singing career at lacrosse games, spent the last week preparing for the event.

“This is not even a big deal compared to what our brave men and women go through and sacrifice,” Stange said. “If I feel a little tired, I think of them and continue on.”

Stange said that each time she sings, she looks to the audience and focuses on someone who is clearly either a veteran or an active-duty military member.

“I love to look at them,” Stange said. “They are always 100-percent focused on the song. They are singing. They’re looking at the flag. And I am sure they are pulling from memory their own personal experience.”