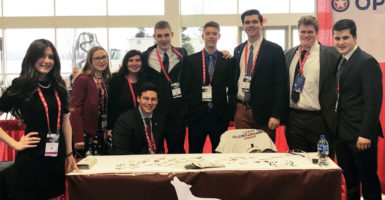 When the American Conservative Union presented its latest Ronald Reagan Award, the honor didn’t go to a seasoned activist, pundit, or politico.

It went to a recent college graduate with less than a year in the workforce under her belt.

Kassy Dillon’s walk to the ballroom stage March 1 to accept the award during the annual Conservative Political Action Conference was a milestone on a journey that began for her about three years ago.

In April 2016, while a 19-year-old sophomore at Mount Holyoke College, a notoriously liberal women’s college in Massachusetts, Dillon was reporting and writing on liberal bias for Campus Reform.

It was in the midst of one of the most divisive election cycles in recent history. But Dillon was about to become one of the more recognizable figures on issues faced by conservative students on their college campuses.

During an event at the University of Massachusetts, in what would become known as the “trigglypuff” incident, Dillon shot a video of a student from Hampshire College who began screaming at the speaker, Christina Hoff Sommers, a frequent critic of modern feminism.

Dillon’s video went viral after its publication by Campus Reform on various social media platforms, and landed her on a segment of “Varney & Co.” on the Fox Business Channel to discuss the incident.

It was only seven months removed from the infamous University of Missouri protests that ousted the university’s president over perceived “systematic racism,” a protest that brought major media attention to the issue of campus free speech and intolerance of conservative views.

Although Dillon had made a name for herself as a reporter, she also had a desire to write opinion pieces but had no connections with major media outlets that would publish her writing.

This desire inspired her to found Lone Conservative, a blog dedicated to providing conservative students across the country with a platform to voice their opinions and a community of support in a campus climate that largely has ostracized their viewpoints.

“I wanted to give college students a place to voice their views,” Dillon said in a phone interview with The Daily Signal.

After a meager start in May 2016, Lone Conservative, or “LoCo,” perhaps can be described as a college student’s National Review.

By last summer, it had ballooned into a presence on social media that boasted 686 published articles from 257 conservative students and recent graduates from 44 states, nearly 27,000 Twitter followers, and growing traction on Facebook and Instagram.

But while Lone Conservative may be the brainchild of Dillon’s desire to write opinion articles, she didn’t even write the first article. In fact, it wasn’t until August 2016, nearly three full months after the site launched, that a post bearing Dillon’s byline was published.

That detail perhaps best highlights Lone Conservative’s mission, which Dillon says was never about her.

She told The Daily Signal that the site is not a reflection of her own views, a constant criticism levied against her on social media.

“I publish pieces that I disagree with all the time,” Dillon said. “It’s not supposed to be a reflection of me, I really want Lone Conservative to be about the students.”

This was a sentiment echoed by the site’s former vice president, Alec Sears, who said it was “the first place to provide an open forum for college students, run by college students.”

“I don’t think [conservative] college students get to share their ideas necessarily all the time, due to hostile environments,” Sears, 21, said. “Lone Conservative provides a space for that.”

And run by college students it is. Lone Conservative features every bit of a governing structure as an established publication. It has an editor-in-chief, a managing editor, even a social media director.

Sears, a native of Dayton, Ohio, joined Lone Conservative in August 2016, while it was still a fledgling publication struggling to grow its audience but a place to get started in politics.

“It’s really helped shape my political identity and where I sit on issues,” Sears said, adding that working for the site inspired him to leave his studies at Wright State University and work in politics without finishing his degree. He also became an intern at NewsBusters, the Media Research Center project that tracks liberal media bias.

A Family and a Bet

The best part of Lone Conservative’s work for Dillon isn’t the output on social media or the published articles. It is the community that the platform has provided for its many contributors.

After a major crowd-sourced fundraising campaign—in which Dillon, a New England Patriots fan, promised to wear a Philadelphia Eagles jersey during the Super Bowl if the goal was accomplished—Lone Conservative last year was able to bring student contributors to the annual Conservative Political Action Conference just outside Washington.

The GoFundMe campaign raised $6,000, and Dillon made good on the promise.

I can’t believe I’m saying this, but if we hit our goal tonight, I’ll wear an Eagles jersey during the Super Bowl. https://t.co/LAoUDdWm4q

Wearing an Eagles jersey in New England is more controversial than a MAGA hat, by far.

The event was around Dillon’s birthday, and some of the contributors who made the trip to the nation’s capital presented her with a binder containing photos of Dillon and her contributors as a birthday present.

“I cried when I got that binder,” Dillon said. “We really are a family.”

The sense of that family environment was echoed by several contributors who shared what working for Dillon and Lone Conservative meant to them.

Lou Scataglia, a junior at Waynesburg University, applied to be a contributor in November 2017. He says that while he hasn’t been writing for very long, he’s been able to “establish close friendships and strong working relationships.”

“I’ve never met anyone [in person] involved with Lone Conservative, but I feel so incredibly close to these people,” Scataglia said in an email to The Daily Signal. “Lone Conservative is the premier organization for young conservatives to get involved with and has, in a short time, changed my life for the better.”

The site’s communications director, Robert Sasso, a junior at Bentley University, said: “Lone Conservative has offered me the opportunity to grow in politics and network with fellow young conservatives throughout the nation.”

One of the most striking stories came from managing editor Amanda Kemp, a senior at the University of North Georgia who is a lesbian.

“Lone Conservative has changed my life because I can be an openly gay conservative and constantly feel respected and loved regardless of any differences in lifestyle opinions,” Kemp said in an email.

“There is not a single contributor in Lone Conservative who has ever given me a hard time for my sexuality,” she said. “The more traditional and religious contributors never question me, hate me, or ignore me.”

Kemp added that Lone Conservative “helped me grow as a person,” and she realized that “following the same ideas as other young politically minded people is wrong.”

“I have been able to form my own opinions and frequently share them within LoCo and nobody attacks me for them,” she said. “We might disagree, but everyone is respectful.”

While the site initially accepted only college students, in the past year it began accepting content from high schoolers, who Dillon notes face some of the same challenges that college students face for their beliefs. Recent graduates also provide some content.

To ensure that those high schoolers develop the skills needed to succeed in today’s political environment, Dillon and the Lone Conservative team instituted a mentorship system that pairs a high school contributor with a college student.

One of those contributors, Clay Robinson, a student at Hilmar High School in Hilmar, California, published his first story with Lone Conservative in February, titled “Don’t Trust Everything You Learn in History Class.”

In an email to The Daily Signal, Robinson said he was “euphoric” upon its publication, and that he since has “met so many people and made many new connections.”

Another high school contributor, Ella McRoberts, from Peters Township High School, said she began writing for the site in March after Lone Conservative’s Twitter account published a tweet looking for high schoolers willing to write about student walkouts at their schools following the shooting in Parkland, Florida. (McRoberts did not participate in her school’s walkout.)

“Ever since then I’ve been a contributor,” McRoberts said in an email. “I [feel] like I belong here, like a group of people support me through thick and thin. What Kassy [Dillon] has created is something that could change lives for the better, and it has to me.”

McRoberts called Dillon “one of the most hardworking, passionate, kind-hearted people I have ever met,” and thanked her for “creating something that has benefited dozens, maybe hundreds of people” who want to express their views.

While serving as a starting point, Lone Conservative has enabled student writers to be published at many other outlets, including the Washington Examiner and National Review, and continues to provide a platform for the next generation of conservative writers and thinkers.

The Lone Conservative family has reached a productivity level that enables Dillon to step away from the day-to-day operations of the site.

Dillon, now 23, graduated in May from Mt. Holyoke, where fellow students booed her as she accepted her diploma in international relations and Middle Eastern studies. She became a staff writer for The Daily Wire, a news site run by conservative commentator Ben Shapiro.

But Dillon maintains an active role with the outlet she built from scratch and grew alongside her own public persona.

“We wouldn’t be where we are today if it wasn’t for Kassy and the platform she has,” Sears said. “But people are hearing about LoCo [now] without ever hearing about Kassy.”