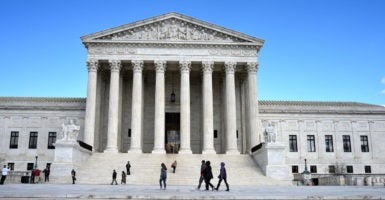 Rep. Mark Green, R-Tenn., intends to introduce a bill in Congress to keep the Supreme Court at nine justices, where it has stood for 150 years. (Photo: Robert Alexander/Getty Images)

A lawmaker from Tennessee plans to introduce a bill in Congress to keep the Supreme Court at nine justices amid efforts by some Democrats to increase the number to as many as 15.

“This Thursday, I will be introducing a constitutional amendment that would limit the number of Supreme Court justices to 9—the number of seats since 1869,” Rep. Mark Green, R-Tenn., tweeted Tuesday. “The Supreme Court must remain a fair and impartial branch of government, not beholden to party.”

Democratic Sens. Elizabeth Warren of Massachusetts, Kamala Harris of California, and Kirsten Gillibrand of New York told Politico that they would consider increasing the number of justices on the Supreme Court.

“We are on the verge of a crisis of confidence in the Supreme Court,” Harris said. “We have to take this challenge head-on, and everything is on the table to do that.”

President Donald Trump pushed back on the idea, however, at a joint press conference Tuesday with Brazilian President Jair Bolsonaro at the White House.

“We would have no interest in that whatsoever. It will never happen,” Trump vowed, at least not for as long as he’s in office. “It won’t happen. I guarantee, it won’t happen for six years.”

Since 1869, the number of Supreme Court justices has been held at nine.

It dropped back to seven in 1866, when Congress passed the Judicial Circuits Act and kept President Andrew Johnson from adding new justices to the court, and in 1869, the number was set at nine, where it has remained since.

In 1937, President Franklin Roosevelt sought to pack the Supreme Court to protect programs in the Democrat’s New Deal that were challenged, and often overturned, by the high court, but his push was rejected by Congress.

Even Roosevelt’s fellow Democrats in Congress rejected his call for what came to be known as his “court-packing” scheme, as did his own vice president, John Nance Garner.

Green said he views Democrats’ efforts to add justices to the court as a threat to American democracy.

“Schemes to pack the court are dangerous to the Founders’ vision of an independent judiciary that serves as a check on both the executive and legislative branches of government,” the freshman lawmaker said.

On the Senate side, Sen. Marco Rubio, R-Fla., introduced a constitutional amendment Tuesday night to “prevent this court-packing scheme.”

Thomas Jipping, deputy director of the Edwin Meese III Center for Legal and Judicial Studies at The Heritage Foundation, told The Daily Signal in an email that Democrats’ efforts to add justices to the Supreme Court is a bad idea.

“The federal courts have been politicized too much already, and the recent, reckless talk about ‘court-packing’ is irresponsible,” Jipping said. “The real issue is what judges are supposed to do in our system of government, not the number of judges on a particular court.”

Carrie Severino, chief counsel and policy director of the Judicial Crisis Network, told The Daily Signal in an email that the effort to pack the court is a partisan push.

“Democrats are so, so desperate to turn the courts into a rubber stamp for their political agenda that they are now talking openly about packing the Supreme Court,” Severino said. “This is a thinly disguised effort to bully and intimidate the court’s justices into serving as a rubber stamp for a liberal political agenda, and it threatens to destroy the independence of the judicial branch.”