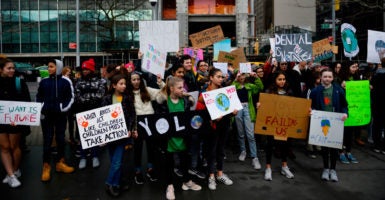 Democratic politicians are encouraging thousands of children to skip school to demand politicians do something about global warming, including passing the Green New Deal.

“[S]tudents are fighting like their world depends on it,” former Vice President Al Gore said in a tweet extolling Haven Coleman, a 12-year-old listed as the U.S. climate strike’s co-founder and co-director.

“I stand with all students striking here in Atlanta and across world today,” Gore tweeted Friday as thousands of students skipped school to protest climate change.

Led by the inspiring @GretaThunberg and @ClimateReality leader @havenruthie in the U.S, students are fighting like their world depends on it. I stand with all students striking here in Atlanta and across world today. #YouthClimateStrike #FridaysForFuture

Student strikes were inspired by 16-year-old Greta Thunberg, who began ditching school in August to sit in protest outside the Swedish parliament. Thunberg told the United Nations in December that “civilization is being sacrificed” by adults who were “stealing” their children’s futures by not immediately shedding fossil fuels.

Backed by well-funded environmental groups, youth strikers are protesting “for the Green New Deal, for a fair and just transition to a 100% renewable economy, and for ending the creation of additional fossil fuel infrastructure,” according to the Youth Climate Strike website.

The kids say “inaction has left us with just 11 years to change the trajectory of the worst effects of climate change.” That deadline is based on the misleading media hype surrounding a U.N. report released in October.

Ocasio-Cortez, activists, and politicians have claimed humanity has less than 12 years to cut emissions and avert catastrophic global warming—a message they only amplified as students took to the streets Friday.

“I am so energized to see young people across this country taking action on climate change,” Khanna tweeted Thursday night. “Our job as lawmakers is to listen to them.”

“If we don’t act, they will have to deal with the fallout from climate disaster,” the Democrat tweeted.

I am so energized to see young people across this country taking action on climate change.

Our job as lawmakers is to listen to them.

If we don’t act, they will have to deal with the fallout from climate disaster.

Omar, a Democrat, will march with climate strikers in Washington, D.C., Friday. Omar is also a Green New Deal supporter.

I’m answering that demand Secretary, and will be standing with them at tomorrow’s march! I hope our country and congress will answer their demand as well. https://t.co/Qqtkrw6W2D

However, Democratic leadership and party moderates have tried to distance themselves from the Green New Deal, which calls for a massive expansion of government control over the economy.

Republicans, on the other hand, want the resolution debated publicly and are confident it can be used against Democrats in the 2020 elections. Some Republicans have called the Green New Deal a grab bag of “socialist” policy demands.