FBI Exposes Wealthy Parents Rigging College for Kids. But It Was Always Rigged. 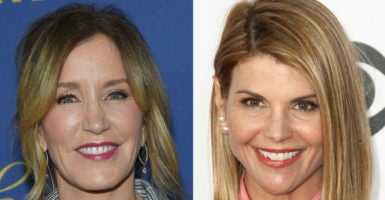 Celebrities such as Felicity Huffman and Lori Loughlin were able to cheat the college admissions system because of their elite celebrity status and high financial capital. (Photo: Lisa O'Connor/Getty Images)

The FBI dropped a new bombshell on Tuesday, and this time the scandal is Russian-free.

Dozens of wealthy parents, including notable celebrities, were charged in a college admissions scandal and accused of paying a total of $25 million in payments to cheat their children into school.

According to Politico, “parents paid a college counseling test prep business in Newport Beach, Calif., called ‘The Key’, which bribed college coaches and administrator and organized a scheme to help students cheat on college entrance exams, including the ACT and SAT.”

It is disappointing that these parents would resort to such measures to ensure that their children get into elite colleges. But Americans should not be surprised that the system is broken. It always has been, and working-class Americans are paying for it.

For the most part, students who earn bachelor’s degrees have higher lifetime earnings than students with only a high school degree. So why have lawmakers promulgated policies like loan forgiveness, the in-school interest subsidy, and even “free” college, to remove financial responsibility from the elite one-third of Americans who obtain the highly sought-after bachelor’s degree?

The hardworking two-thirds of Americans who have bypassed this system altogether should not have to absorb the cost for students who are far more likely to achieve high career earnings.

Additionally, left-wing politicians have recently pushed for “free college” options that would entirely remove all financial responsibility from students and transfer those costs to taxpayers. California, for example, is considering legislation that would grant all citizens access to free college, including the children of Hollywood elite.

These policies fuel the troublesome trend of degree inflation. It is true that higher levels of education indicate higher levels of earnings, and some may argue that this is because a college degree equips students with the skills necessary to succeed in the workplace. But it appears increasingly apparent that the simple attainment of a degree carries far more weight than the actual attainment of knowledge or marketable skills.

The signaling that occurs when a student obtains a degree tells employers that they have followed through on their education, but says little about their human capital development.

While most would not put it in so many words, this is a phenomenon that most Americans, including the wealthy parents wrapped up in this scandal, are well aware of.

As George Mason University’s Bryan Caplan has noted, if average students were presented with this scenario: You can either receive a bachelor’s degree from Georgetown University without going to a single class, or you can take classes at Georgetown but you walk away without the degree, most Americans would pick the former option, rather than the latter.

This is because most Americans with a small amount of motivation and an internet connection can seek out alternative means for obtaining career knowledge outside of the classroom. However, getting your foot in the door without a college degree is another story.

This admissions scandal should cause all Americans to rethink the system they are paying into. Celebrities such as Felicity Huffman and Lori Loughlin were able to cheat the system because of their elite celebrity status and high financial capital.

This is not the system President Lyndon Johnson sought in his vision for a “Great Society.” His hope was to grant all Americans, regardless of socio-economic status, a pathway to the American dream.

Instead, higher education in America today embodies a system that shackles American students and taxpayers alike with high student loan debt, and fails to create a proper education-to-workforce pipeline that enables graduates to pay down their loans.