New Trade Deficit Numbers Remind Us Why They Don’t Matter 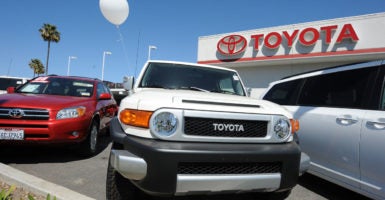 Investment in America by foreign companies is everywhere. Japan’s Toyota, South Korea’s Samsung, the United Kingdom’s HSBC, and the Netherlands' Philips all create thousands of jobs for Americans. Pictured: Toyota cars, SUVs, and trucks are on display at a Toyota dealership in Torrance, California, March 12, 2010. (Photo: Robyn Beck/AFP/Getty Images)

The trade deficit is simply a calculation of how much Americans buy from abroad versus how much they sell.

Each month, the U.S. Census Bureau releases data on the flow of goods and services. Those numbers include things such as the value of cars exported from the BMW plant in Greenville, South Carolina, and the value of airline and hotel purchases made by visitors to America.

In fact, the last time America had a significant decrease in its trade deficit was in 2009, during the Great Recession.

Trade deficit numbers also leave out an important piece of the picture; namely, foreign investment. The flow of capital, such as in building a new factory or purchasing government bonds, is entirely left out of the number released Wednesday by the Census Bureau.

America actually has a capital surplus, meaning companies and individuals around the world invest more money in the U.S. than we do abroad. The next investment numbers will be released this summer, but the media probably won’t cover it.

Investment in America by foreign companies is everywhere. Japan’s Toyota, South Korea’s Samsung, the United Kingdom’s HSBC, and the Netherlands’ Philips all create thousands of jobs for Americans.

So, what does all of this really mean for us as Americans?

When individuals have the freedom to buy and sell with the world—free of government intervention—businesses are forced to compete and innovate more, resulting in more choices in the marketplace.

From groceries to smartphone, there are endless options at price points that fit the needs of everyone.

Rather than focusing on the trade deficit, Congress, the Trump administration, and even the media should focus more on the barriers imposed by governments (including the U.S.’) to limit trade freedom, what the real-life effects of those barriers are, and how we can fix them.