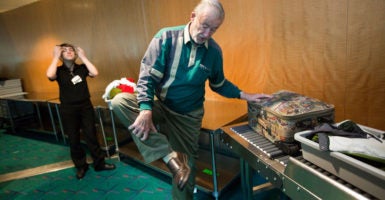 Last month, the Portland, Oregon, City Council voted to leave the FBI’s Joint Terrorism Task Force, one of our nation’s first lines of defense against terrorism.

But that’s exactly what the Joint Terrorism Task Force is doing. Leaving the task force will only harm real counterterrorism investigations.

Joint Terrorism Task Forces around the country are responsible for investigating, detecting, prosecuting, and removing terrorists and terrorist organizations.

They have been key in breaking up cells like the “Portland Seven,” planned attacks on military bases like Fort Dix in New Jersey, and plots against airports.

Typically, when we hear about a counterterrorism investigation, the Joint Terrorism Task Force is playing an active and decisive role in the operation.

The first Joint Terrorism Task Force was established in 1980. Task forces are based in 104 cities nationwide, 71 of which were created following the events of 9/11.

An important component of the Joint Terrorism Task Force is that it serves as a shared intelligence hub. That allows the law enforcement community to be better informed about possible terrorist plots and terrorists, and to coordinate their counterterrorism activities.

According to Eudaly, they “want to keep [their] community safe.” It’s their belief that if they were to remain partners with the Joint Terrorism Task Force, they would be neglecting and not respecting the immigrants in their community.

What Portland is missing is that it doesn’t matter whether the individuals being investigated by the Joint Terrorism Task Force are immigrants or not if they pose a threat to their neighbors.

Any city that’s concerned about threats toward its residents should not be disassociating from a task force whose primary purpose is to protect the community from terrorist attacks.

Portland is automatically disadvantaged because the local police force is likely to get less information on extremists and less knowledge of ongoing operations, ultimately leaving residents less safe.

Portland Police Chief Danielle Outlaw stated, “I believe that removing Portland police officers from the JTTF is a disservice to our community and not in the best interest of our city’s public safety.”

Clear communication between local and federal agencies is vital in the fight against terrorism, whatever the ideology.

By leaving the Joint Terrorism Task Force, Portland increases the potential for terrorists to slip through the cracks. The lack of organized communication and direct collaboration increases the risk of important evidence for an investigation into suspected terrorist organizations being held, but not shared, by a law enforcement agency.

It’s also possible that, without the participation and collaboration of the Portland police, ongoing task force investigations in the city could be interfered with.

The top priority of law enforcement is to protect the American people. If Portland truly wishes to keep its communities safe, it should see the considerable value in partnering with the Joint Terrorism Task Force.

As Portland Mayor Ted Wheeler, who voted against leaving the task force, stated, “While values are important, values alone cannot protect the safety of the community.”