On Hill, Homeland Security Officials Describe Emergency at the Border 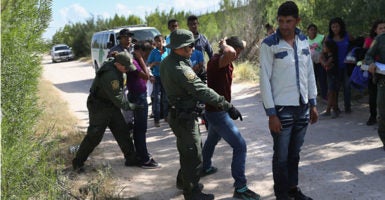 Kevin McAleenan, commissioner of U.S. Customs and Border Protection, told the Senate Judiciary Committee that the Border Patrol should be able to detain families as a unit, which is prohibited under the government’s interpretation of current law.

Congress also should reform the asylum laws and make it easier for immigration officials to send illegal border crossers to to their home countries, McAleenan said.

Sen. Lindsey Graham, R-S.C., chairman of the Judiciary Committee, asked whether a change in law or more resources—including funds for a border wall—would make a bigger dent in illegal immigration.

“But the immediate impact—63 percent of our traffic at the border would be addressed by a change in the laws,” McAleenan said.

The hearing comes as President Donald Trump makes his case to Congress for the national emergency he declared Feb. 15 to secure funds to build a wall or other barrier along sections of the southern border.

Nielsen and McAleenan shared the same updated statistics with House and Senate lawmakers.

A total of 76,103 illegal immigrants were arrested or deemed inadmissible in February, according to Customs and Border Protection statistics.

At the House hearing, Nielsen testified that illegal immigration across the border is “spiraling out of control” and is now a “humanitarian catastrophe.”

“Our capacity is already severely strained, but these increases will overwhelm the system entirely,” Nielsen said. “This is not a manufactured crisis. This is truly an emergency.”

However, House Democrats were tough on her, questioning her veracity while focusing primarily on last year’s controversy of separating children.

“The secretary can choose whether to be complicit in this administration’s misinformation campaign, or she can correct the record,” Thompson said at one point.

McAleenan told the Judiciary Committee that 70 percent of illegal immigrants come from Guatemala, Honduras, and El Salvador. Because of U.S. asylum laws, only about 2 percent who bring a child into the country ever are sent back.

“The smugglers are actively advertising that if you come with a child, they will be released,” he said.

The problem dates to 1997, when the Clinton administration entered into something called the Flores Settlement Agreement to end a class action lawsuit brought in the 1980s.

The settlement established a policy that the federal government would release unaccompanied minors from custody to parents, relatives, or other caretakers after no more than 20 days, or, alternatively, determine the “least restrictive” setting for those children.

Then, in 2008, the Democrat-controlled House and Senate passed bipartisan legislation to combat human trafficking, and President George W. Bush, a Republican, signed it into law.

Section 235 (g) of that law, the William Wilberforce Trafficking Victims Protection Reauthorization Act, states that unaccompanied minors entering the country must be transferred to the custody of the Department of Health and Human Services’ Office of Refugee Resettlement, rather than to the Department of Homeland Security.

The U.S. Court of Appeals for the 9th Circuit expanded the
Flores settlement in 2016 to include children brought to the country illegally by their parents, in addition to unaccompanied minors.

For consistency between the provision of the anti-trafficking law and the 9th Circuit’s interpretation of the Flores Settlement Agreement, children who came into the country illegally with parents had to be taken into HHS custody.

This left law enforcement with the choice of separating children from parents or continuing the catch-and-release policy.

“Without Flores, there is no protection for children, who could be caged,” Durbin said.

At several points during the hearing, McAleenan clarified that he did not want to scrap the protections under the Flores agreement.

“The three changes I outlined, having appropriate conditions is essential and we are committed to that,” McAleenan said. “What we’re asking for is the ability that families be detained together in an appropriate way.”

“The numbers of border crossings are still at a historic low compared to other times in our nation’s history,” Blumenthal said.

McAleenan replied: “No, Senator, they’re not. We are on pace for over 700,000 crossings this year. That’s closer to historic highs than historic lows.”

He said the high point for modern times was 1 million illegal crossings in 2006.

McAleenan said it’s time to look at the facts.

“We have to confront what has happened in these five months. Four months of 50,000 or 60,000 crossing illegally,” McAleenan said. “Last month, 76,000 in February. We have not had a February like that in over a decade.”

Trump declared the national emergency last month to have the ability to move more than $6 billion toward new construction of a wall or other barricades along the southern border.

“Do we need a border wall or a barrier? And, I want your honest answer. If you get fired, you can come to work for me. Do we need one?” Kennedy asked.

“We do,” McAleenan answered. “We need to maintain what we have. There is 654 miles [of barriers], and we need hundreds of additional miles in critical areas we have difficulty controlling, that the president has requested.”

Kennedy asked, “What would happen if we tore down the walls we have now?

“Parts of our border would be completely ungovernable,” McAleenan said.