‘I Have a Girl Brain but a Boy Body’: Virginia Kindergartners Are Read Transgender Story 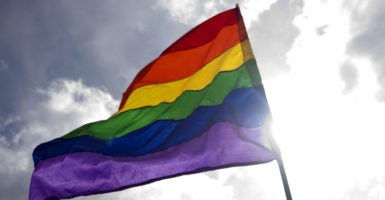 "With radical sex ed around every corner—including first-graders’—and now this dangerous excuse for “story time,” it’s no wonder that U.S. homeschooling is in the middle of its biggest surge in 20 years," Tony Perkins writes. (Photo: Raul Arboleda/Stringer/Getty Images)

It looked like your typical reading class. Dozens of kindergarten students sat cross-legged on the floor watching their teacher turn to the first page. It didn’t take long for the 5-year-olds to realize: This was no ordinary children’s book. “I have a girl brain but a boy body,” Miss McBride started. “This is called transgender. I was born this way.”

Thanks to a new partnership between two radically liberal forces—the National Education Association and Human Rights Campaign—there’s no telling how many elementary school students heard the exact same message in their own classrooms. That’s because Monday was Read Across America Day, and for the first time, the country’s biggest LGBT extremists were official sponsors.

The NEA, which has been a satellite office for the far-left wing of the Democratic Party for years, insisted that it was “urgent” to ally with HRC now that the president has rolled back Barack Obama’s bathroom mandate. “The Trump administration has been openly hostile,” said NEA President Lily Garcia, “whether or not you’re a transgender soldier or transgender little boy or girl. It is more important than ever before that we speak out.”

In The Washington Post article about this new initiative, no one explains whether parents were warned. Judging by both organizations’ track record, it’s safe to assume they weren’t. After all, this is exactly the kind of outrageous indoctrination that’s caused millions of parents to pull their kids out of school and either move them to Christian campuses or teach them at home.

With radical sex ed around every corner—including first-graders’—and now this dangerous excuse for “story time,” it’s no wonder that U.S. homeschooling is in the middle of its biggest surge in 20 years.

Encouraging kids to accept—or worse, live out—this kind of genderlessness is not only destructive, it’s what the American College of Pediatricians calls “child abuse.”

For years, LGBT activists wanted to keep the goal of luring children into sexual confusion under wraps. Now that they’ve hoodwinked a lot of the country on their agenda, these extremists no longer have to hide. In fact, they are increasingly bold—even boastful—about their real intentions of recruiting kids. As the head of a Toronto publishing company famously said: “I have come to indoctrinate your children (and I’m not a bit sorry).” It’s up to vigilant parents to make sure they don’t succeed.