Pence: Democrats Embrace ‘Infanticide and a Culture of Death’ 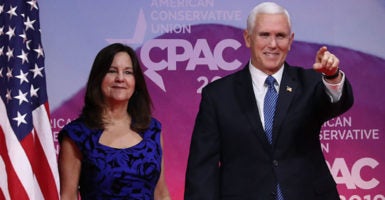 Vice President Mike Pence used an appearance Friday at an annual gathering of conservatives to call out Democrats for advancing a “culture of death” in recent actions on abortion.

“Life is winning in America. For all the progress we’re making, tragically, at the very moment more Americans are embracing the right to life, leading members of the Democratic Party are embracing a radical agenda of abortion on demand,” Pence said at the Conservative Political Action Conference.

Virginia Gov. Ralph Northam, a Democrat, recently defended a comment he made that appeared to support infanticide.

Days ago, all but three Senate Democrats voted against a bill that would require proper medical care for a newborn baby who survived a botched abortion.

“In state legislatures across the country, Democrats have endorsed late-term abortion,” Pence said. “The Democrat governor of Virginia has openly embraced infanticide.”

“Just four short days ago,” the vice president said, “Democrats in the Senate, including every Democratic senator running for president, voted for a bill that would have prevented newborn babies who survived failing abortions from being killed.”

“Democrats are standing for late-term abortion, infanticide, and a culture of death,” Pence said. “I promise you, this president, this party, and this movement will always stand for the unborn and stand for the inalienable right to life.”

Pence gave a wide-ranging speech at CPAC, the largest annual national gathering of conservative activists, which runs through Saturday at the Gaylord National Resort and Convention Center in National Harbor, Maryland, just outside Washington.

The vice president addressed Trump’s ambitions for a U.S. Space Force, building a wall on the southern border, the crisis in Venezuela, and the Democrats’ so-called Green New Deal proposal.

Pence said the people of Venezuela are embracing freedom against the embattled socialist regime of dictator Nicolas Maduro.

“Freedom is more generous, more helpful, and more humane than any other social or economic model ever attempted because it is the only philosophy that respects the dignity and worth of every single life and sees every man, woman, and child as made in the image of God,” Pence said.

Regarding the nonbinding resolution that many congressional Democrats are rallying around, he said: “The only thing green about the so-called Green New Deal is how much green it’s going to cost taxpayers if these people pass it into law: $90 trillion.”

Pence got a huge ovation when he echoed Trump’s line in his recent State of the Union address: “America will never be a socialist country.”

The vice president also said “freedom of religion is under attack” in America. He talked about the left’s attacks on second lady Karen Pence for teaching art at a Christian school.

“My own family recently came under attack just because my wife Karen went back to teach art to children at a Christian school,” he said. “Let me say before all of you, I couldn’t be more proud of my wife. She is a Marine Corps mom, she’s a great school teacher, and Karen Pence is a great second lady of the United States of America.”

But the vice president was clear this was not about his family, but about all Americans, because religious liberty is enshrined in the Constitution and “in the hearts of the American people.”

“From this president, and this administration, we will always stand with people of faith,” Pence said. “We will always defend the freedom of religion of every American of every faith.”