On the Cusp of Catastrophe, California Has No Margin for Error 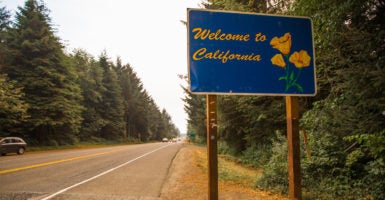 Nearly one-third of the nation's welfare recipients live in California, and nearly 1 in 5 live below the poverty line. (Photo: Jorge Villalba/Getty Images)

Californians brag that their state is the world’s fifth-largest economy. They talk as reverentially of Silicon Valley companies Apple, Facebook, and Google as the ancient Greeks did of their Olympian gods.

Hollywood and universities such as Caltech, Stanford, and Berkeley are cited as permanent proof of the intellectual, aesthetic, and technological dominance of West Coast culture.

Californians also see their progressive, one-party state as a neo-socialist model for a nation moving hard to the left.

But how long will they retain such confidence?

California’s 40 million residents depend on less than 1 percent of the state’s taxpayers to pay nearly half of the state income tax, which for California’s highest tier of earners tops out at the nation’s highest rate of 13.3 percent.

In other words, California cannot afford to lose even a few thousand of its wealthiest individual taxpayers. But a new federal tax law now caps deductions for state and local taxes at $10,000—a radical change that promises to cost many high-earning taxpayers tens of thousands of dollars.

If even a few thousand of the state’s 1 percent flee to nearby no-tax states such as Nevada or Texas, California could face a devastating shortfall in annual income.

During the 2011-16 California drought, politicians and experts claimed that global warming had permanently altered the climate, and that snow and rain would become increasingly rare in California. As a result, long-planned low-elevation reservoirs, designed to store water during exceptionally wet years, were considered all but useless and thus were never built.

Then, in 2016 and 2017, California received record snow and rainfall—and the windfall of millions of acre-feet of runoff was mostly let out to sea. Nothing since has been learned.

California has again been experiencing rain and cold that could approach seasonal records. The state has been soaked by some 18 trillion gallons of rain in February alone. With still no effort to expand California’s water storage capacity, millions of acre-feet of runoff are once again cascading out to sea (and may be sorely missed next year).

The inability to build reservoirs is especially tragic given that the state’s high-speed rail project has gobbled up more than $5 billion in funds without a single foot of track laid. The total cost soared from an original $40 billion promise to a projected $77 billion.

To his credit, newly elected Gov. Gavin Newsom, fearing a budget catastrophe, canceled the statewide project while allowing a few miles of the quarter-built Central Valley “track to nowhere” to be finished.

For years, high-speed rail has drained the state budget of transportation funds that might have easily updated nightmarish stretches of the Central Valley’s Highway 99, or ensured that the nearby ossified Amtrak line became a modern two-track line.

California politicians vie with each other to prove their open-borders bona fides in an effort to appeal to the estimated 27 percent of Californians who were not born in the United States.

But the health, educational, and legal costs associated with massive illegal immigration are squeezing the budget. About a third of the California budget goes to the state’s Medicare program, Medi-Cal. Half the state’s births are funded by Medi-Cal, and in nearly a third of those state-funded births, the mother is an illegal immigrant.

California is facing a perfect storm of homelessness. Its labyrinth of zoning and building regulations discourages low-cost housing. Its generous welfare benefits, nonenforcement of vagrancy and public health laws, and moderate climate draw in the homeless.

Nearly one-third of the nation’s welfare recipients live in the state, and nearly 1 in 5 live below the poverty line.

The result is that tens of thousands of people live on the streets and sidewalks of the state’s major cities, where primeval diseases such as typhus have reappeared.

California’s progressive government seems clueless how to deal with these issues, given that solutions such as low-cost housing and strict enforcement of health codes are seen as either too expensive or politically incorrect.

In sum, California has no margin for error.

No more. Californians may have once derided the state’s 1 percent as selfish rich people. Now, they are praying that these heavily burdened taxpayers stay put and are willing to pay far more than what they had paid before.

That is the only way California can continue to spend money on projects that have not led to safe roads, plentiful water, good schools, and safe streets.

A California reckoning is on the horizon, and it may not be pretty.