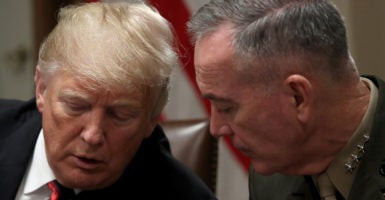 President Donald Trump confers with Gen. Joseph Dunford, chairman of the Joint Chiefs of Staff, during a meeting Oct. 23, 2018, with military leaders in the Cabinet Room of the White House. (Photo: Win McNamee/Getty Images)

Will the Trump administration be able to continue rebuilding our military?

That depends in large measure on whether Congress passes the National Defense Authorization Act for the upcoming fiscal year.

In his inaugural hearing as the chairman of the House Armed Services Committee, Rep. Adam Smith, D-Wash., delivered a message of committee unity and commitment to passing the National Defense Authorization Act.

Smith mentioned the National Defense Authorization Act’s 50-plus years of enactment and how it’s important to maintain that record.

While that’s an impressive streak, even more than in previous years, the content of the bill will be more important than its passage.

It will determine whether the new defense strategy is realized or ends up in the pile of broken promises.

It all starts with the defense top line (a combination of base and contingency funding), which should be at least $742 billion for 2020, a 3.6 percent increase from 2019’s funding.

That’s an increase aligned with current assessments of the need for increased defense budgets.

In the summer of 2017, then-Secretary of Defense James Mattis and the chairman of the Joint Chiefs of Staff, Gen. Joseph Dunford, first outlined that the defense budget would need to grow between 3 percent and 5 percent above inflation annually to be able to accommodate the current requirements.

The need has only become more acute since then.

Further, the bipartisan, congressionally appointed commission in charge of review and evaluation of the National Defense Strategy unanimously saw resources as one of the important question marks of the strategy.

It reaffirmed the need to increase “the base defense budget at an average rate of [3 percent to 5 percent] above inflation through the Future Years Defense Program and perhaps beyond.”

This budgetary level will allow the military to continue to grow and modernize, while filling readiness gaps. Further, it will serve as a strong message to our allies and competitors that the United States is serious about engaging in the long-term great power competition described in the National Defense Strategy.

That path began when the defense budget received a substantial increase in fiscal years 2018 and 2019. Those increases were largely invested in increased readiness and capacity.

Despite the initial investments, military readiness is not a direct equation in which inputs of dollars are inserted in one end and a ready force emerges at the end of the year. It takes time.

After all, the military deals with the recruitment and training of individuals, with platforms that take years to be built, with buildings that need to be built, and with research that needs to be done. These, and more, are the elements that add up to a ready force.

As such, it will take time for the military to be fully rebuilt, and even then, the country will have to continue investing in maintaining the force at its proper readiness level.

For instance, the Army talks about being reaching its readiness goals by 2022. That’s a reflection not only of the amount of work that needs to be done, but also the cost in time that it takes through the different parts of the Army to become ready.

The same rationale is applicable throughout other service branches. This lag time is even more pronounced when the services need to build ships and planes to add to the fleet.

The bottom line is that it’s important to continue to work to implement the National Defense Strategy and its shift toward great power competition.

Congress and the Pentagon need to do the hard work of actually implementing the new strategy and molding our military to it. Otherwise, the strategy will represent nothing more than empty words in a document.