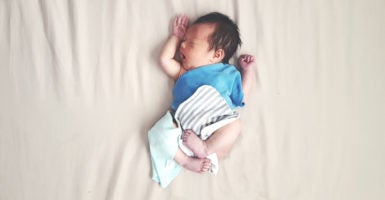 The Born-Alive Abortion Survivors Protection Act would have mandated that babies born alive during an abortion would receive “the same degree of professional skill and care to protect the newborn as would be offered to any other child born alive at the same gestational age.” (Photo: Sarah Her/EyeEm/Getty Images)

The Senate voted 53-44 in favor of legislation that would protect survivors of abortion, falling short of the necessary 60 votes to proceed as Democrats blocked the bill when only three of them joined Republicans.

Sens. Doug Jones of Alabama, Joe Manchin of West Virginia, and Bob Casey Jr. of Pennsylvania were the only Democrats to vote for the bill. All other 44 Democratic senators voted against the bill.

Republican Sens. Lisa Murkowski of Alaska, Tim Scott of South Carolina, and Kevin Cramer of North Dakota were not present for the vote.

The Born-Alive Abortion Survivors Protection Act would have mandated that babies born alive during an abortion would receive “the same degree of professional skill and care to protect the newborn as would be offered to any other child born alive at the same gestational age,” according to Sen. Ben Sasse’s website.

I’m pro-life. I’m unapologetically pro-life, but this bill is not actually about anything that limits abortion. This bill doesn’t have anything to do with Roe v. Wade. …

What this bill does is try to secure basic rights, equal rights for babies that are born and are outside the womb.

Sasse then called out Schumer for misrepresenting the legislation.

“This language is … too blunt for many people in this body … Infanticide is what [Born-Alive Abortion Survivors Protection Act] is actually about,” Sasse said. “Are we a country that protects babies that are alive, born outside the womb, after surviving a botched abortion?”

“The legislation we are debating today is just the latest salvo in the far right wing assault on a women’s constitutionally protected right to an abortion,” Hirono said.

Earlier Monday, the Knights of Columbus released a poll from Marist that found “Americans are now as likely to identify as pro-life, 47 percent, as pro-choice, 47 percent,” according to the Knights’ website.

In an op-ed published Feb. 12 in USA Today, Sasse wrote, “It should not be difficult for the members of the U.S. Congress to affirm that a child, outside the womb, deserves the protections of our law.”

“It should not be controversial to say that a child, cold and naked on a table, deserves to be treated with dignity and humanity,” he added.

Melanie Israel, a research associate for the DeVos Center for Religion and Civil Society at The Heritage Foundation, wrote in an op-ed published Monday that “it’s hard to believe anyone would oppose such a policy.”

“Yet well-funded abortion advocates like Planned Parenthood and the National Abortion Federation, who are radically out of step with the national consensus, have convinced some in Congress that requiring medical care for babies who survive abortion is an assault on ‘reproductive health care,’” Israel wrote for The Daily Signal.