9 Years After Obamacare Passed, Agency Finds Numbers Were Wildly Off 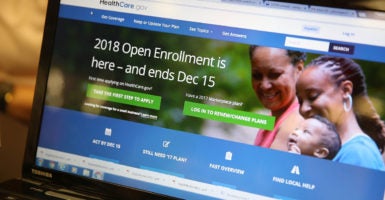 Democrats defeated Republicans in the Obamacare repeal fight by warning that 22 million Americans would be thrown off their health insurance. They pointed to data leaked from the Congressional Budget Office.

Well, it turns out that data was completely wrong.

According to a report by the Centers for Medicare and Medicaid Services released Wednesday, the Congressional Budget Office wildly overestimated the number of people who would lose their health insurance with the repeal of the individual mandate penalty.

Initial estimates from the Congressional Budget Office said 14 million would drop off their health insurance coverage due to the elimination of the individual mandate. Then, during the height of the 2017 debate over repeal, progressives touted a leaked number from the Congressional Budget Office claiming that 22 million people would “lose” their insurance if Congress repealed the law.

However, as health care analyst Avik Roy pointed out, what made this number so high was the inflated number of people expected to lose their insurance due to repeal of the mandate—about 73 percent to be exact. So, it wouldn’t be 22 million Americans losing their insurance. Most of those in the projection would simply be choosing to opt out of insurance.

And it turns out even that wasn’t true. A far smaller number of Americans appear to be opting out of insurance since the individual mandate’s repeal. Only 2.5 million more people are expected to go without insurance in 2019 due to its repeal, according to the latest report, and that number is expected to decline in the years ahead.

The Washington Examiner’s Philip Klein called the Congressional Budget Office “scandalously off in its estimates.” That’s about right, considering all that was riding on its numbers.

As Klein noted, the Congressional Budget Office estimates were a large part of why the individual mandate was adopted in the first place, and a big reason why its repeal didn’t pass. So it’s a wonder why the media isn’t picking this up.

“Given the outsized influence that the CBO has on policymaking in Washington, the CBO’s misfire on the individual mandate should be a major story,” Klein wrote.

The Congressional Budget Office is opaque, to say the least. It does not publish or share the way it comes up with numbers, and some have criticized the organization for its lack of transparency and outsized influence on policymaking.

Doug Badger, a visiting fellow in domestic policy studies at The Heritage Foundation, told The Daily Signal that Congressional Budget Office analysis has been a chronic problem.

“When it comes to the individual mandate, CBO has never let the facts affect their wildly inaccurate estimates. CBO continued to forecast that millions of insured Americans would suddenly become uninsured if the mandate were repealed,” Badger wrote in an email to The Daily Signal. “CBO’s faulty estimates misled the public into believing that repealing Obamacare would lead to a vast increase in the number of uninsured. Bad estimates produced bad policy.”

Many conservatives are fed up with the deference shown to the agency, given it’s poor track record and track of transparency. Reps. Mark Walker, R-N.C., and Jim Jordan, R-Ohio, suggested in 2017 that it’s time to stop “blindly” following the agency’s predictions.

“The value of having outside experts review legislation cannot be understated,” they wrote for the Washington Examiner. “But continuing to hinge congressional actions on the projections of an agency that has proven to be so consistently wrong does a disservice to not only members trying to represent their constituents, it primarily does a disservice to the public.”

I wrote in 2017 that perhaps we should be more skeptical toward the findings of independent agencies like the Congressional Budget Office. It seems those doubts were valid.

Unfortunately, the damage is already done. These faulty numbers have had their decisive effect on policy debates, and we are living with the consequences.

We can expect nothing more until we all begin to take such “expert” predictions with a little less certainty.