The Obamacare Facts That Liberals Don’t Want You to Know 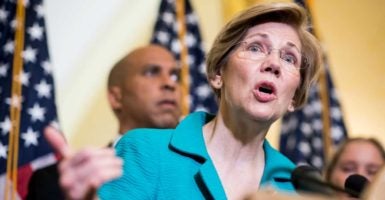 The Congressional Budget Office, which has impacted the health care debate, has consistently said that repealing Obamacare would lead to around 22 to 23 million Americans losing their insurance by 2026.

This has been a frequent talking point for those that would like to keep President Barack Obama’s signature health care law.

The health care of 22 million Americans is on the line. Thank you, @SenSchumer, @SenGillibrand and @SenateDems for fighting back. https://t.co/zLb6GDjohj

The @SenateGOP "health care" bill is back from the dead to rip health care away from 22 million Americans. We are a better people than that. pic.twitter.com/WQbuCf2m3s

But a recent commentary by health care expert Avik Roy pointed out how this number may be misleading at best.

Roy wrote in Forbes that according to leaked information he received from a congressional staffer, this 22 million number is in fact mostly coming from the projection of a repeal of the individual mandate.

The individual mandate is one of the most controversial parts of Obamacare that essentially forces Americans to buy health insurance, or receive a fine. Republican-backed repeal proposals to repeal universally aim to eliminate this regulation.

Roy wrote that “of the 22 million fewer people who will have health insurance in 2026 under the Senate [health care] bill, 16 million will voluntarily drop out of the market because they will no longer face a financial penalty for doing so: 73 percent of the total.”

Unlike the progressive narrative that repealing Obamacare will lead to tens of millions of Americans getting booted from their plans, it shows that nearly three-quarters of those leaving their plans will voluntarily withdraw from the ones they have.

An enormous 73 percent of the 22 million number will simply stop buying the product they are forced to purchase under current law.

This important fact has been mostly left out of the debate, as the CBO has not been entirely transparent with how its numbers are calculated. So far, the CBO has essentially refused to explain the primary reason so many Americans will go uninsured.

The CBO has been consistently praised for its purportedly unbiased analysis. A recent commentary for Wired said that “since its inception four decades ago, the CBO has occupied a rarified space in which the objectivity of data reigns.”

Americans are simply given a presumably nonpartisan number that pours out of the inner sanctums of a tight-knit agency as they debate the merits of policy that impacts all Americans and generations to come.

But in the messy space of politics, opaqueness of methodology can return skewed or incomplete results.

Drew Gonshorowski, a health care expert for The Heritage Foundation, wrote about the CBO’s transparency problem in The Hill. He wrote:

The CBO could better serve legislators, media and researchers if their models and methods were made public. Lifting this veil would allow more discussion around the effects of various proposals without having to wait for an explicit CBO score … [And] maybe one of the most important aspects of such a change, this would allow legislators to have real conversations about the effects of their legislation, publicly, with less delay.

Reps. Mark Walker, R-N.C., and Jim Jordan, R-Ohio, wrote in a commentary for the Washington Examiner how often CBO projections have been wrong and why it’s wrong for Congress to “blindly follow” its estimates.

For instance, they noted how the original 2010 CBO projections for Obamacare claimed that “21 million Americans would enroll in the insurance exchanges by 2016.”

The real number ended up being around 10 million and is one of the reasons the market is so unstable.

The American people deserve an open debate on one of the most important policy issues of our generation.

It is a debate over the priorities and outcomes of a health care system that favors the individual and the family over the collective—one that throws vast decision-making power to government and bureaucracies, or is limited and placed closest to the hands of the people.

This is why transparency over potential policy outcomes is so essential.

This article has been corrected to note that the Washington Examiner commentary criticizing CBO predictions was co-authored by Rep. Mark Meadows, R-N.C.